On September 4, I rode in Will Bike 4 Food once again.  This was my 5th time participating in this fundraiser, and the 4th time I’ve actually done the ride.

I arrived at the event at 6:30am (just as the sun was starting to rise), got checked in, and had some food.  It was very slightly chilly (around 60 degrees), but considerably warmer than the day of last year’s ride.  I got going right at 7:00, and was able to start out in short sleeves, as I got warm enough from pedaling.  The route went north from Hatfield center, up through Whately and Deerfield, following the Connecticut River.  Along the way, a few other 100-mile riders passed me, including one person who was in the Bikefest ride the previous weekend.  He rode with me for a little while and we chatted.

In the north end of Deerfield the route went on the bike trail east to Montague, crossing the river on this bridge (click on pictures to view full size): 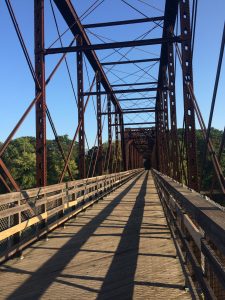 Here’s the view that morning, north, then south: 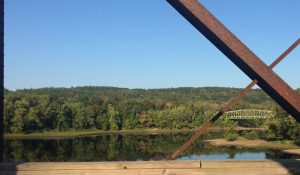 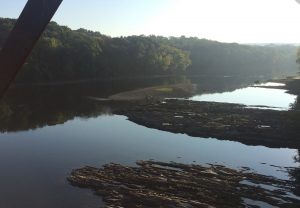 I then continued along the trail a couple of miles to downtown Turners Falls.  There I went back across the river into the town of Gill, and started doing some climbing.  Most of the climb was on a side road called “Mountain Road”, which lives up to the name.  That road then has a steep descent, requiring a lot of braking, before it joins back up with the main road.  A few more miles after that, and after curving north, I reached the Northfield Mount Hermon School, where the first water stop was set up, 1/4 of the way through the ride.  The table there was being staffed by some students from the school, and in addition to water, they had various donated food in a cooler, including sandwiches.  I ate an apple, and then put a granola bar and a sandwich in my bike bag to eat later.  The day was starting to get fairly warm, so I took off the long bike pants I was wearing, and put on sunscreen.

From there, the route continued north, with a bit of a jog west, into Northfield.  Just after the jog (which went through corners of Gill and Bernardston), I stopped by this pretty pond on route 142: 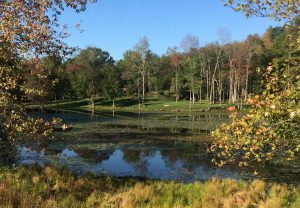 From there it was a few miles north to the Vermont border, and then I was riding through the town of Vernon.

I stopped for a rest in Vernon, near a cemetery: 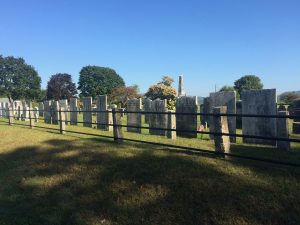 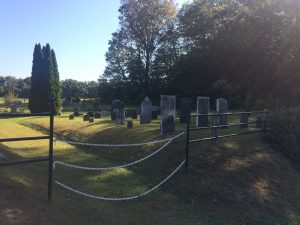 I was getting a bit hungry, and ate a granola bar before continuing.  I headed up through the rest of Vernon, almost to the city of Brattleboro before the route turned west, and went on the one dirt road of the ride – Broad Brook Road.

Running along much of the road’s length is what I presume to be Broad Brook: 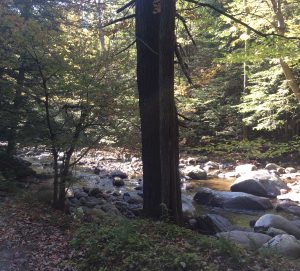 There was also a small side road that I was glad not to be following, as it looked like it really lives up to its name: 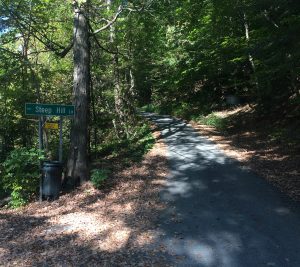 Once the climb was done, the road became paved, and went under I-91 and into Guilford center.  At that point the route started back south.  Shortly before re-entering Massachusetts, there’s a long pond – Weatherhead Hollow Pond – adjacent to the road.  Here’s a picture of its northern end: 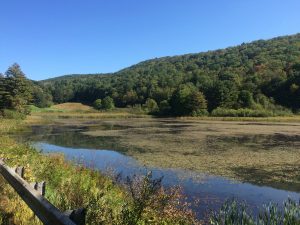 I crossed into Leyden, MA, at about the 48-mile mark, and soon I was climbing a steep side road up to Leyden center, at the halfway point of the ride.  There I stopped at the town hall for a break, where I ate the sandwich I had grabbed earlier.  Here’s the town hall itself, as well as the church across the street: 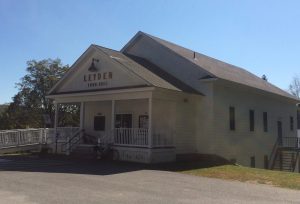 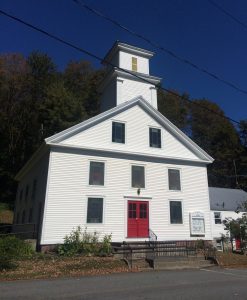 A house next to the town hall had this important sign by the road: 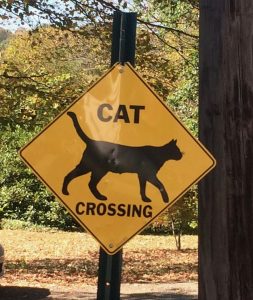 As I finished the sandwich, some other WB4F riders emerged from behind town hall, and mentioned that there’s a cafe in the back of the building that was still open, with bathrooms and water and whatnot.  I had seen the cafe sign, and decided to go back there.  Turns out it’s run just on Sundays, and only certain parts of the year, by a few community members in Leyden.  They were happy to let me fill up my water bottles in the kitchen, and I also bought and consumed a blueberry scone.  The people staffing the place were impressed at meeting various people biking 100 miles that day.

After using the bathroom I was on my way again.  The next section of 10 miles or so featured alternating uphill and downhill bits, which went through parts of the towns of Colrain and Shelburne, and then a long downhill section took me into Greenfield, where I headed southward.  By this time it was quite hot outside – the high temperature was an unseasonal 91 Fahrenheit, so it was easy to get really thirsty.  I stopped at the edge of downtown and got a bottle of lemonade at a convenience store.  There had been a good bit of shade in the hilly towns, but I was more in the sun in Greenfield and to the south of there.

Riding south, I entered Deerfield, and rode past the historic preservation section, where there was a water stop just closing up.  They still had cold water to offer, so I accepted a bottle of that (and topped off my bike bottles).  Then a while after that I went through the town center just before passing into Whately.

Halfway down through Whately there was a rest stop by the town offices, as there had been last year.  I got some more cold water there, and ate a piece of watermelon.  After that, the route went more south, a ways into Hatfield, before turning west around mile 75.  I went for another climb (not too steep but a but long) into Williamsburg, then had a little downhill and uphill, followed by some flat riding by the Northampton reservoir, and then went further west (and up the last strenuous climb of the day) toward Williamsburg center.

A couple of miles before the town center was the last water stop of the day, staffed by a local troop of Frontier Girls (troop 210 from Florence, I think).  They also had drinks on ice, as had been the case at previous stops, so I enjoyed more cold water (and also had some crackers). 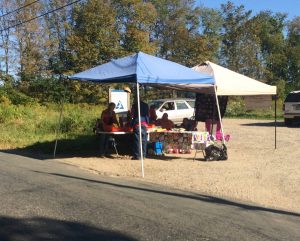 This was at mile 84, so I just had 16 miles left.  The remaining route took me to Williamsburg center, then went back southeast into Northampton, through Florence center there, and on the Noho rail trail for a bit before heading northeast into Hatfield.  I had hoped to get to the end of the ride at 4:00 or so, but by the time I got there it was 4:45 – the same time I finished last year.  The heat had made it necessary to take more shade and water breaks than I otherwise might have needed, so if it hadn’t been so hot, I possibly could have done better on time.

Nonetheless, it felt good to make it.  As mentioned in one of my live posts, I also hit my fundraising goal during the ride, and that evening, after getting home, I made my matching donation.  Thanks to everyone who gave!