Blog : “Sufferin’,” but not in silence

“Sufferin’,” but not in silence

(Note: After being busy with house buying and moving for a few months, I’m finally getting back to the blog.Â  This is the first of a few posts I meant to put up much earlier.)

On the way home from my Michigan trip in early July, I made a stop in upstate New York.Â  Many times before I had passed by the town of Seneca Falls, and this time I finally took the opportunity to stop and visit the Women’s Rights Historical Park located there. 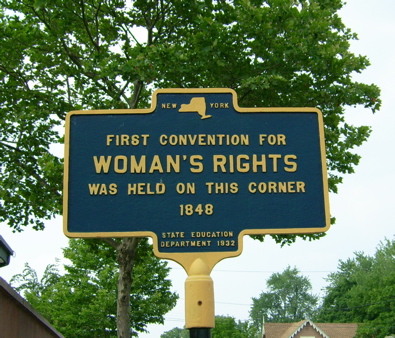 This small park commemorates the convention held there in 1848 to demand legal equality for women in property, education, work and religious life, and, of course, to call for women to have the right to vote.

There’s a 2-story visitors’ center there, which has a display of statues on the first floor. 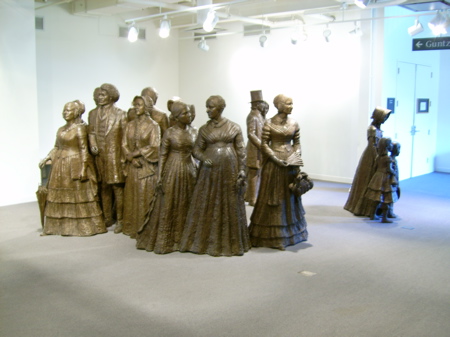 Some of them represent famous organizers and attendees of the convention, and others are meant to be generic attendees (i.e. they’re not supposed to be anyone in particular).

On the left here is Elizabeth Cady Stanton, with Frederick Douglass in the middle. 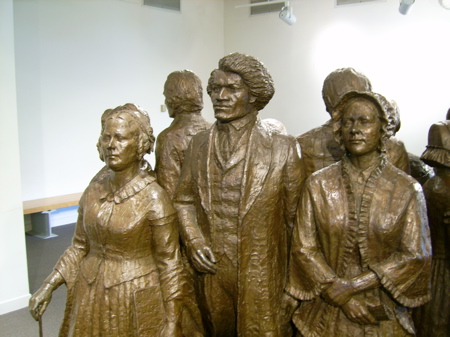 Here are Lucretia Mott and her husband James. 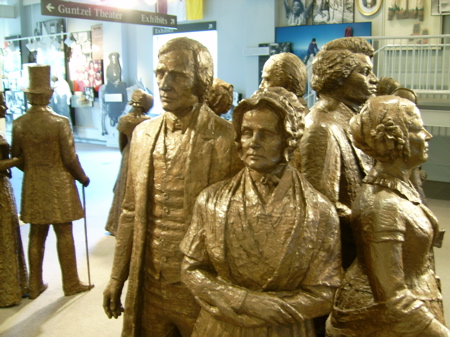 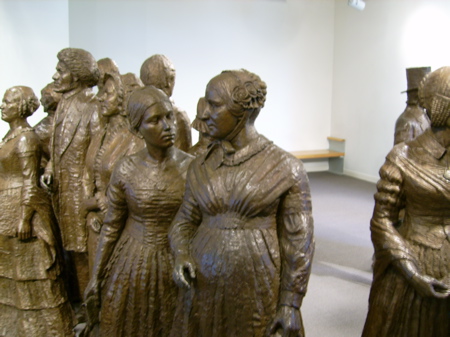 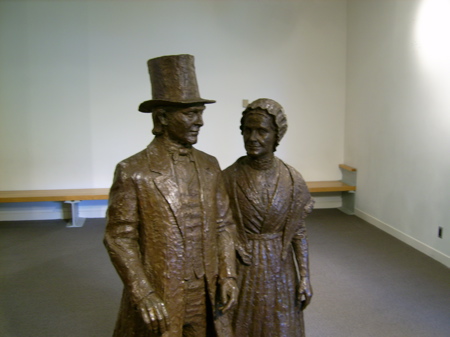 and Jane and Richard Hunt (left and center), who hosted the meeting that led to the convention: 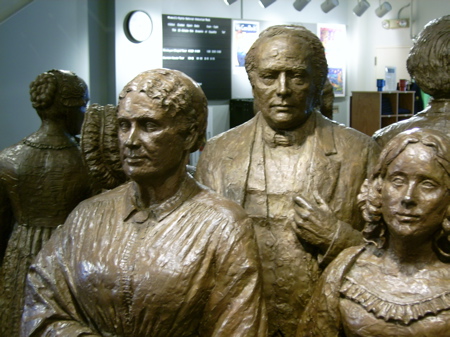 Beyond the statues there was a wall showing various images of the fight for equality. 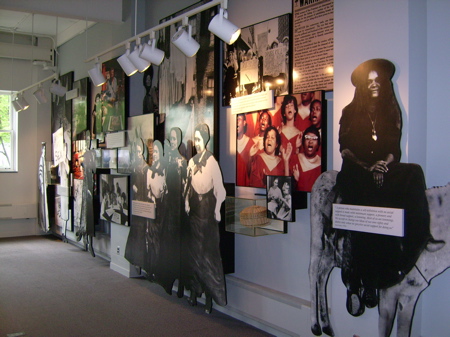 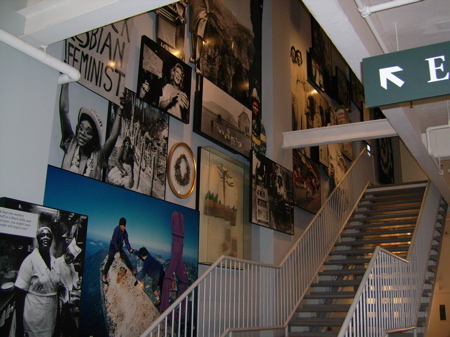 The stairs led up to the main museum, with several exhibits showcasing the history and achievements of feminism.Â  Included here was another statue of an important figure who wasn’t at the 1848 convention: Sojourner Truth. 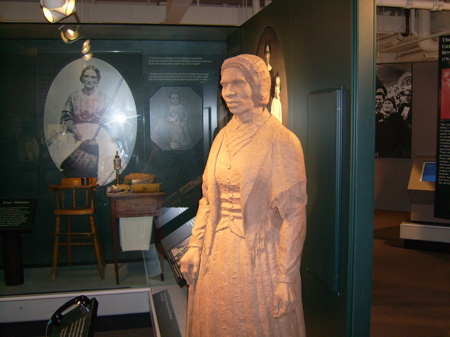 There were a few signposts that gave a timeline of events, and from which I learned a few things I hadn’t known before.Â  For instance, before women gained suffrage nationally, a handful of states and territories granted the right to vote regardless of gender.Â  The first was the Wyoming territory in 1870.Â  I also learned that the first woman elected to Congress (Jeannette Rankin) was elected before the 19th amendment, in 1916.

Adjacent to the visitors’ center is the skeleton of the chapel in which the convention was held. 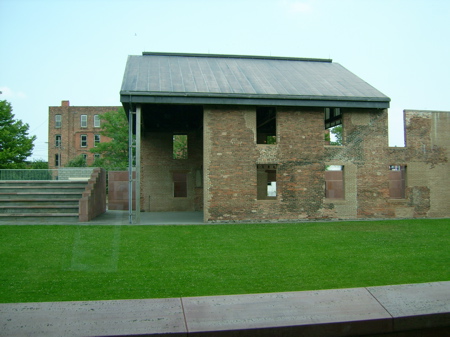 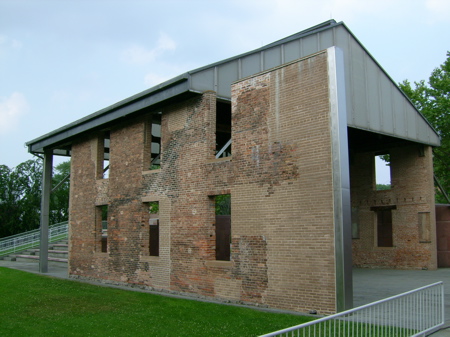 Just down a slope from that building is a fountain in the form of a wall with water flowing down it.Â  Carved on the wall is the convention’s Declaration of Sentiments: 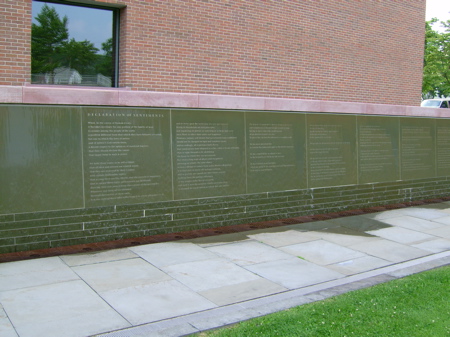 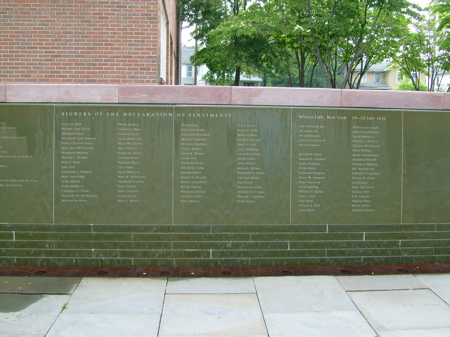 It’s definitely an inspirational site to visit, and I’m glad I took the time to stop by.Â  One of the sad things I reflected on was the fact that practically nobody who participated in that convention actually lived to see national suffrage.Â  The 19th amendment was ratified in 1920 – 72 years after the convention (which forms an interesting symmetry with the fact that the convention itself occurred 72 years after the founding of the country).Â  It’s also surreal to think about the fact that suffrage occurred less than a century ago – women have only enjoyed the right to vote in the U.S. for 88 years.Â  There has been progress since then, in gaining gender parity in several other arenas, but there remains quite a ways to go.

Maybe it will take less than another 160 years to finish the work started in Seneca Falls. 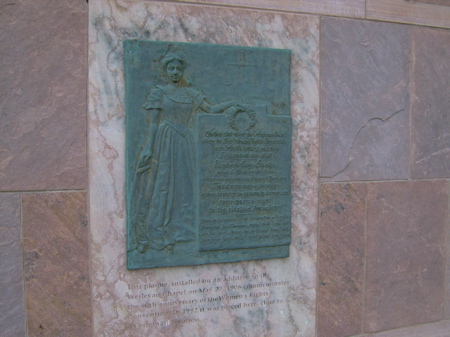