Blog : Gotta get up to get down

Gotta get up to get down

Last Sunday I went for another training ride, in preparation for my MS fundraising ride. This time, I decided to ride a route that I’d never been on before, not even by car. I figured it would be fun to explore the countryside, and see at least one particular site I’d heard about.

So I set off to ride from Northampton up to Williamsburg, then West to Chesterfield, visiting the Chesterfield Gorge, continuing South to Huntington, and then heading back East through Westhampton to Noho. Total distance would be about 41 miles.

Those towns I would be riding through are some of what are known as the Hilltowns of Western Mass. That day, I found out why they are called that.

It started out nicely enough, with a little up and down riding as I went Northwest on Route 9, going into Williamsburg. At one point the Mill River runs alongside the road, and I stopped to take some pictures: 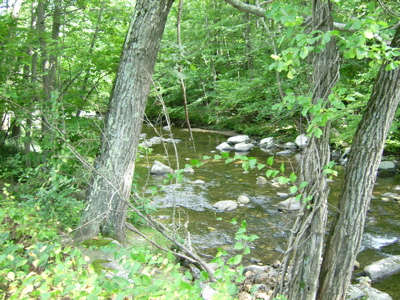 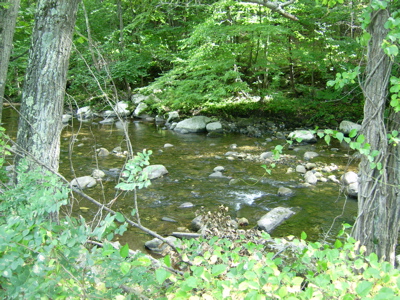 Across the street from the river was this vet clinic, with a permanent greeter for visitors: 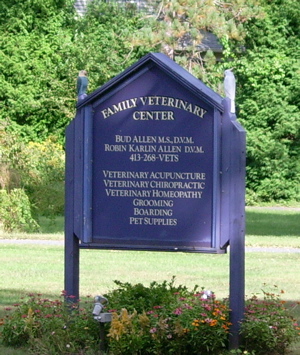 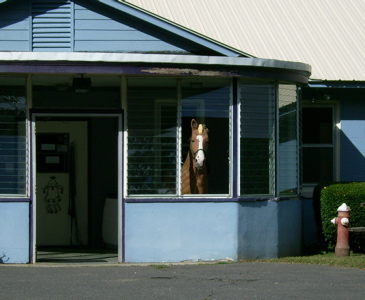 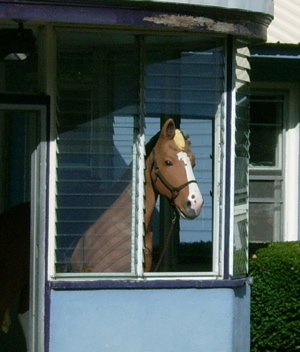 Once I passed through the town center, I turned off onto Route 143 to go West. That road climbs up a hill…and climbs…and climbs…and climbs. I had to ride in my lowest gears, and kept stopping to rest as I climbed. The road would sort of level off occasionally, but only for a short distance, and then it would climb again. A number of times I though I might be about to crest the hill, and then it would rise again. Eventually I did get some downhill portions, and then there was a final climb to Chesterfield center. From there, it was strictly (and steeply) downhill to reach the Westfield River. Here are a couple of pics of that, first looking North: 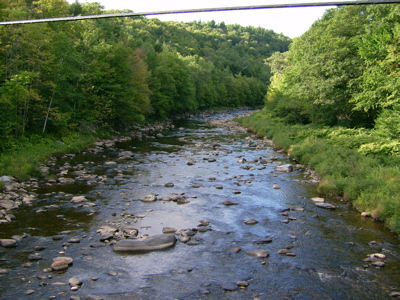 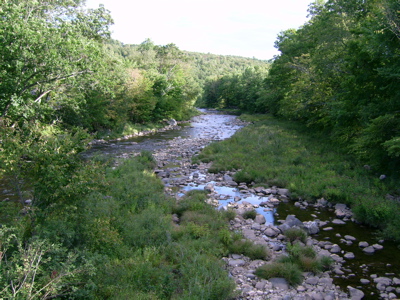 Right by the river was a cross street known as Ireland Rd. I turned South on Ireland, and only had to go a short distance to reach the entrance to the Chesterfield Gorge reservation. I took a nice break from riding here, and got several pictures along the gorge (which the Westfield flows through). 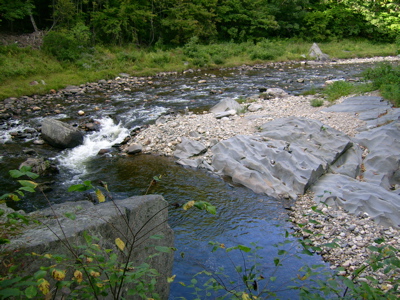 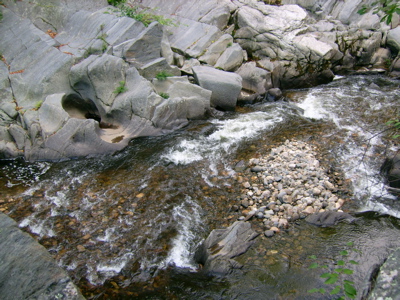 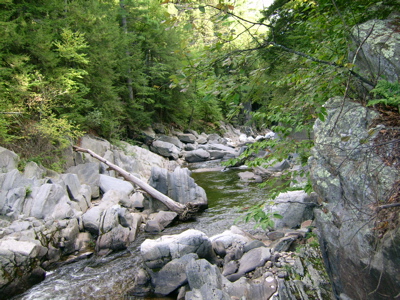 This is an old bridge abutment: 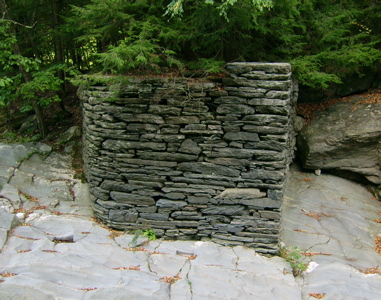 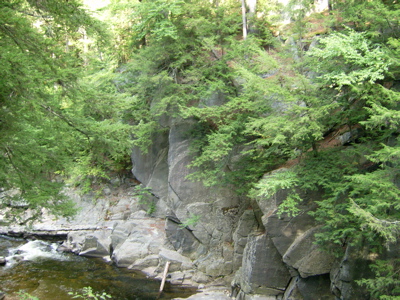 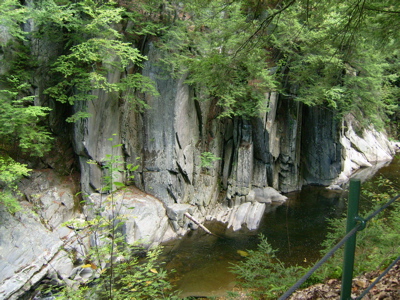 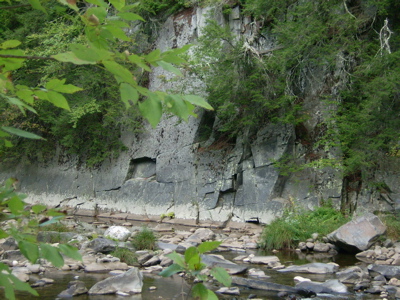 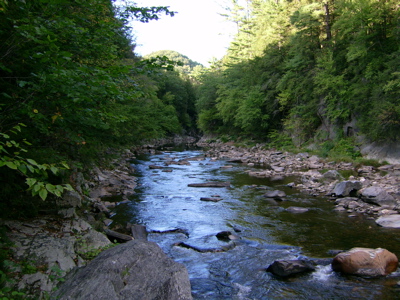 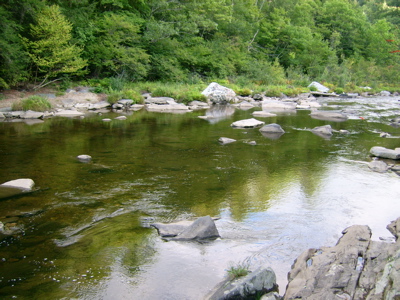 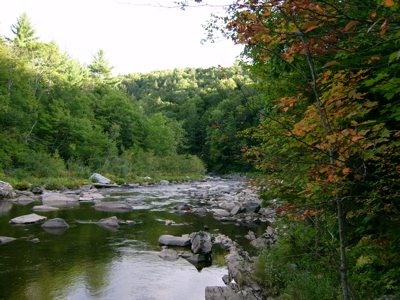 From there I continued South on Ireland. This involved heading up another hill. Another very long hill, that is. At least this time, I was able to see a nice view during one of my rest breaks: 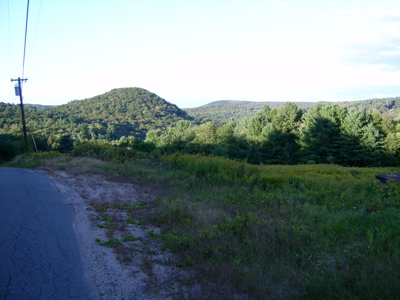 I believe that ridge on the right is what I rode over when going through Chesterfield. Here’s a view of just that ridge: 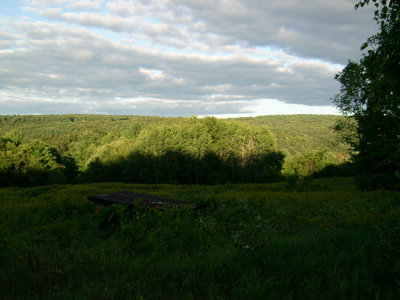 Further up this hill, I saw some deer run into the woods. I stopped where they had left the road, and there they were – 3 of them – in a little clearing. By the time I got my camera out, though, they had fled into the trees where I could not see them. Ah, well.

Eventually Ireland leveled off, and I rode faster for a while. Then the road began another long descent, all the way until it reached Route 112 in Huntington. 112 descended more, with just a few mild uphill bits. Unfortunately, as I rode South on 112, I started getting hungry. You see, I got a late start on this ride, leaving the house at 3pm, and had forgotten to bring any snacks. Because of the hills, I was not as far along as I had thought I might be at this time (which was approaching 7pm). The sun was also starting to get low in the sky, and so the weather threatened to get cold (the high for the day had only been 62).

I pressed on, and got to Route 66 (state route, that is, not the famous US 66). I turned East on 66 to head toward home, and was immediately faced with another long hill climb. This time, as I was getting a bit tired, I had to rest more frequently. I also started to genuinely get cold, because the sun went down, and I hadn’t brought a sweatshirt or jacket. I did have lights with me, though, so the darkness itself didn’t pose a problem. I did make it to the top of that hill after some time, and coasted downhill into Westhampton.

The cold wind of the fast downhill riding proved a bit too much for me though. between the cold and the hunger I didn’t feel I could continue. By this point I’d been out for over 5 hours (which I originally thought would be my total time), so I threw in the towel and called home for a ride. I had to wait by the side of the road for 20 minutes, which was cold, but not as cold as if I’d been moving at a good clip on the bike.

The place I stopped was 7 miles short of home, so I did make it 34 miles. Also, it sounds from the descriptions of the ride I’ll be doing on the 29th as though it may not be as hilly as what I had just ridden. So, the ride was still good preparation.