On August 20, I went for another long ride – this time I wanted to check out a hill that was mentioned in the 100-mile ride description on the Food Bank website.  They mentioned that the hill was where the route passes from Westhampton into Huntington, and that it is the worst hill of the ride.

I began by heading to Northampton and taking the bike trail there to its terminus in Leeds.  Along the way, I spotted this stenciled text on the trail in Look Park, which I have seen before in other locations: 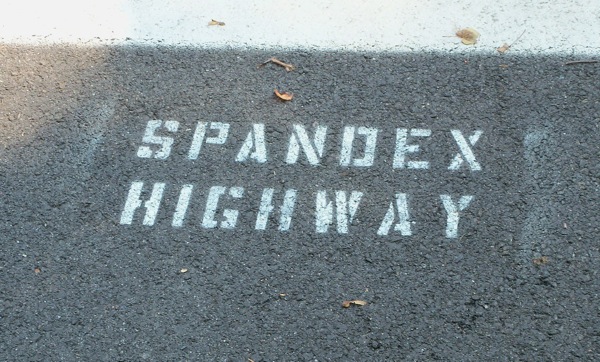 I have no idea who has painted these, but it’s amusing, IMHO.

After leaving the trail, I arced along back roads (which I’d been on in some organized rides before) into Westhampton.  I passed by this barn just before reaching the town center: 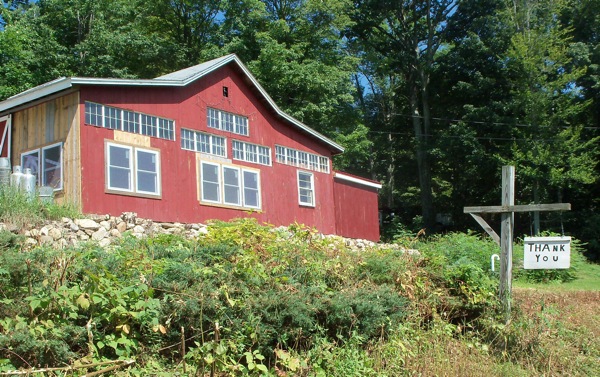 And there was this sign, which said the same thing on both sides: 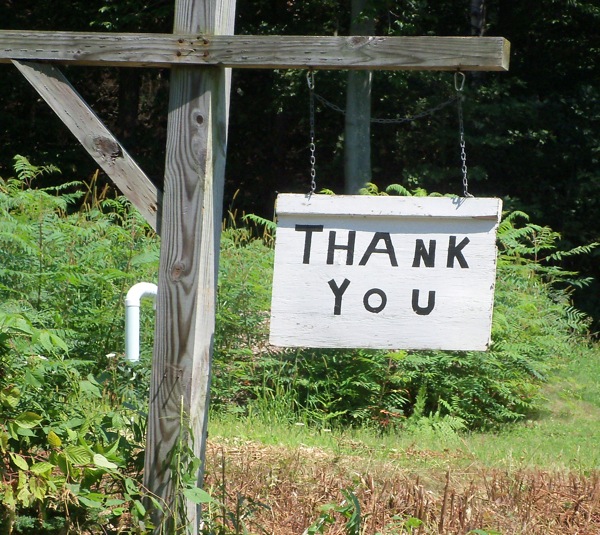 Who could they be thanking?  And for what?

A little ways past Westhampton center I reached route 66 (not the famous one) and headed west.  It didn’t take too long for me to have to start climbing, but I wasn’t sure if I was climbing “the” hill yet (I’d biked along this road before, but it was at night, going the other direction, and happened 4 years ago).  The climbing was not too steep, but went on for long enough that I had to rest twice.  I got a bit of a reprieve after that, and then came to what seemed to be the real climb.  I started heading up in a low gear, and had to pause a rest a little way up.  I continued on once I’d caught my breath, and soon found that the road leveled off, and I crossed the Huntington town line.  Then there was a little bit more of an incline – and that was it, I was over the top.  It turned out that the worst hill that I’ll face on 9/17 isn’t too bad.

There is a long downhill ride, though.  The west side of the hill descends farther than one climbs on the east side.  It gets a little steep at points, so I had to lay on the brakes a few times before I got to route 112 at the bottom.  Once I did get there, I headed south on 112.  Riding near the Westfield River.  The road passes over the river at one point, as you can see here: 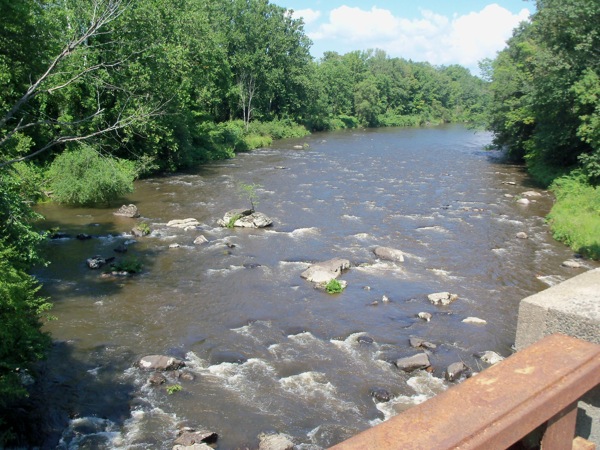 Just after that, I arrived at Huntington center, where I had lunch at a place called the River Cafe.  Decent food, but not a place I’d go out of the way to visit.

I continued south, coming to US-20.  Just before reaching 20, there’s a bridge on 112 the goes over railroad tracks and a smaller river (which I think is also a branch of the Westfield).  Here’s the view along the bridge, looking south: 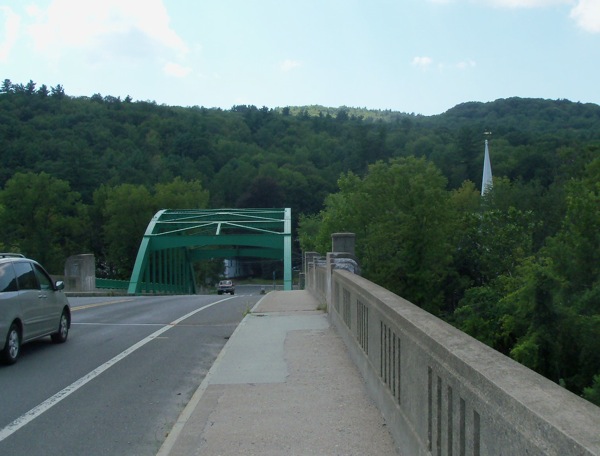 And the view to the east: 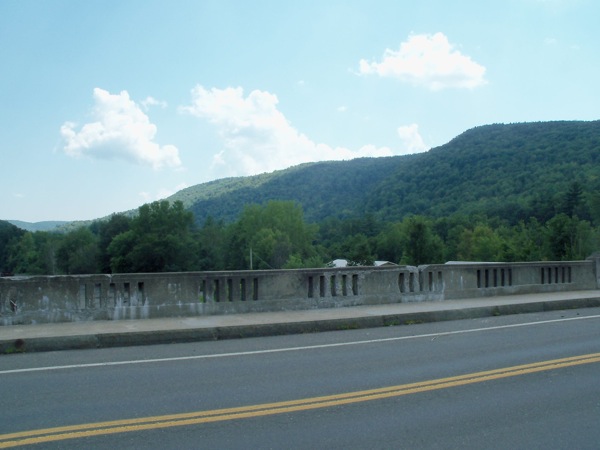 Route 20 runs alongside some hills, it seems.

Here is the little branch of the river, which joins with the main portion (the one I crossed earlier) just to the east: 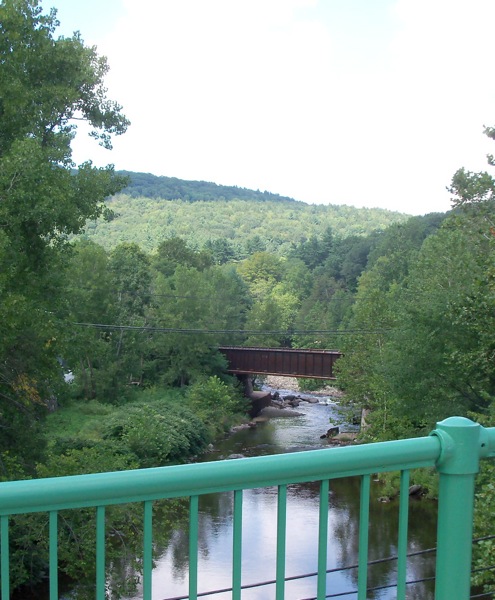 I headed along 20 and was soon in the town of Russell.  For a while, the road followed along the Westfield River, getting away from it as I headed through the town center.  It went back near the river further east, with some stunning hills on the other side of the river (those hills and the river were on the north side of the road): 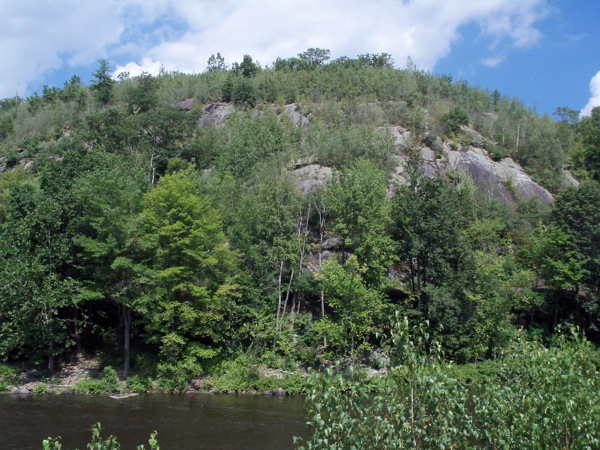 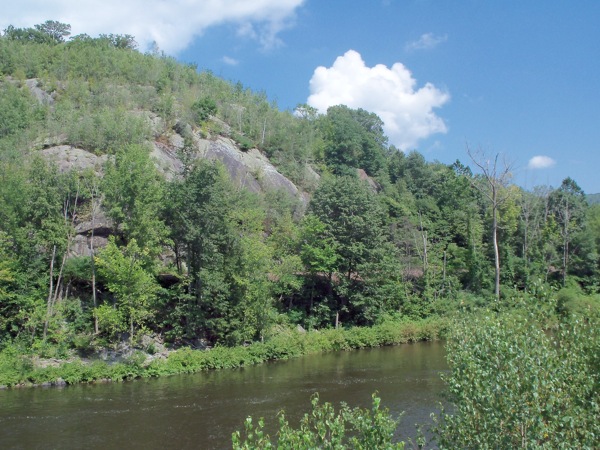 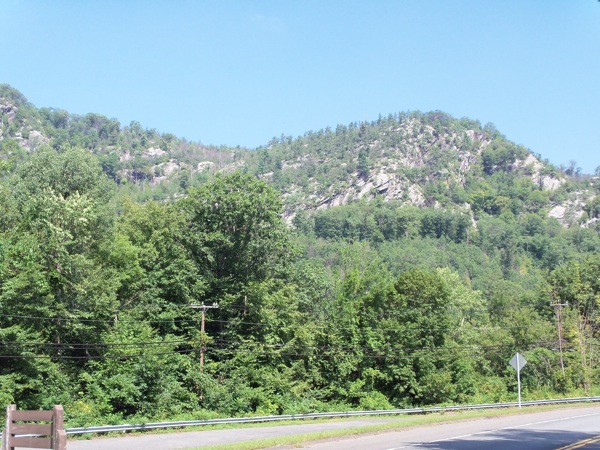 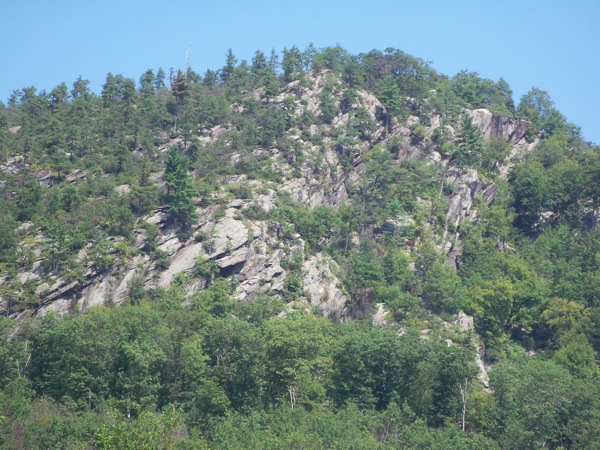 Eventually, the road passed beneath the high overpass of the Mass Pike, and then across the Westfield city line.  The surroundings slowly got more urban as I headed into downtown.  When I got there, I discovered that the common was being completely reconstructed: 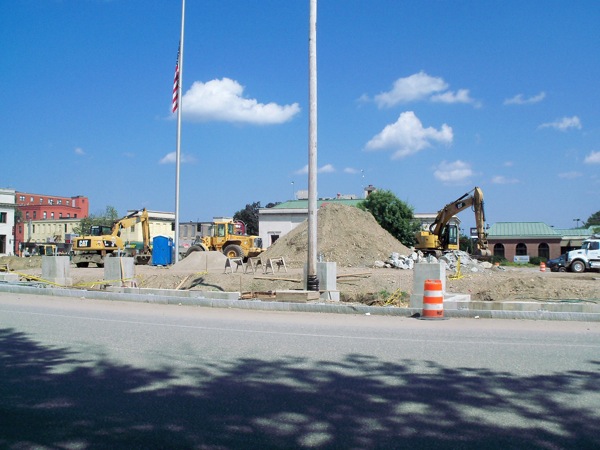 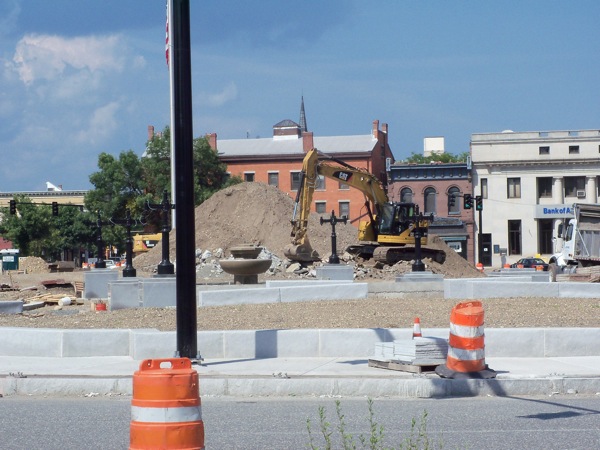 From here I went south on Route 10 down into the town of Southwick (which I’d never entered before).  I wanted to check out the Southwick bike trail, which I’d heard a lot about.  I got onto the trail somewhat south of its starting point, and headed south from there.  It’s a very nice trail, with smooth pavement and a lot of signage you don’t find on other area trails.

The trail in Southwick also connects with a longer trail in another state: 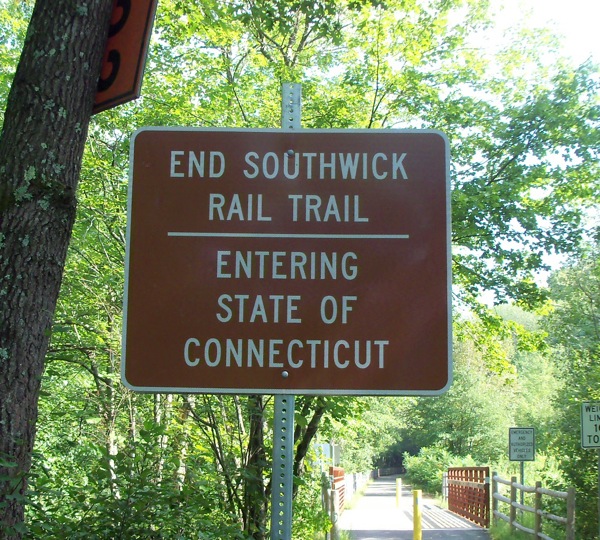 I only rode about 100 yards or so into CT, and then turned around, though not before taking a picture of the creek/marsh nearby: 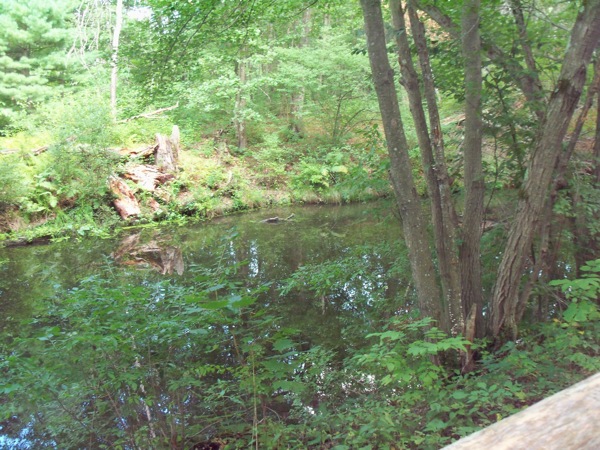 Someday I would like to ride that trail, which I believe goes continuously down to Farmington (a suburb of Hartford).  For now though, I went back into MA: 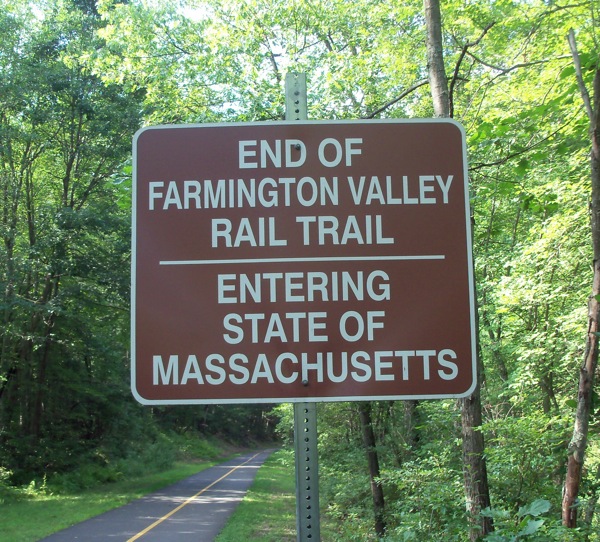 On the way back north, I stopped to take pictures of a trail underpass which had been decorated with aquatic murals: 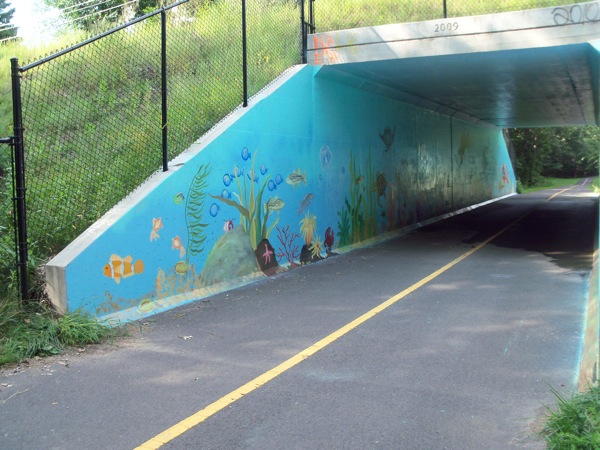 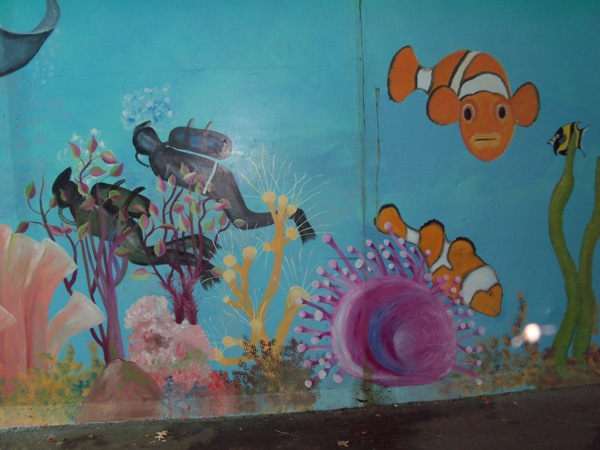 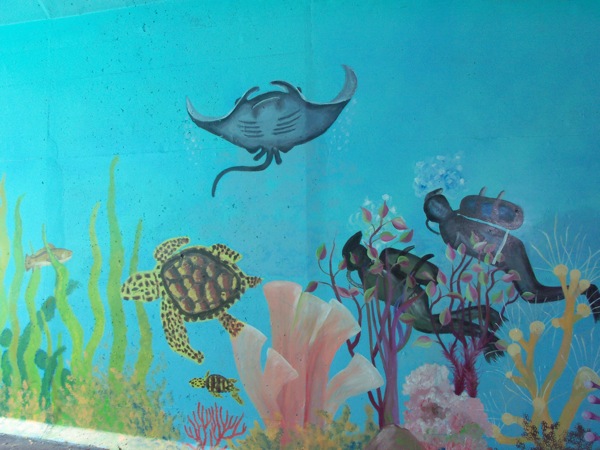 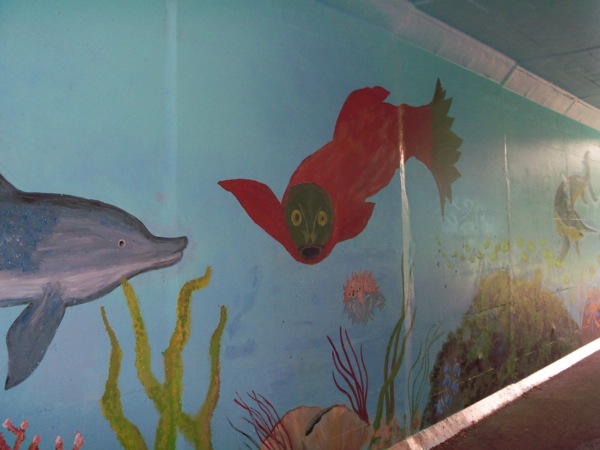 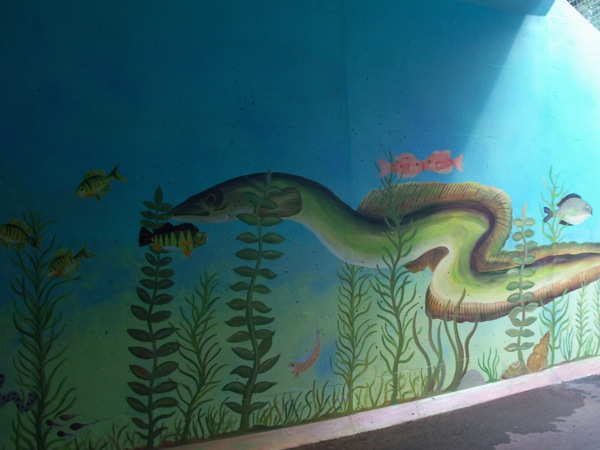 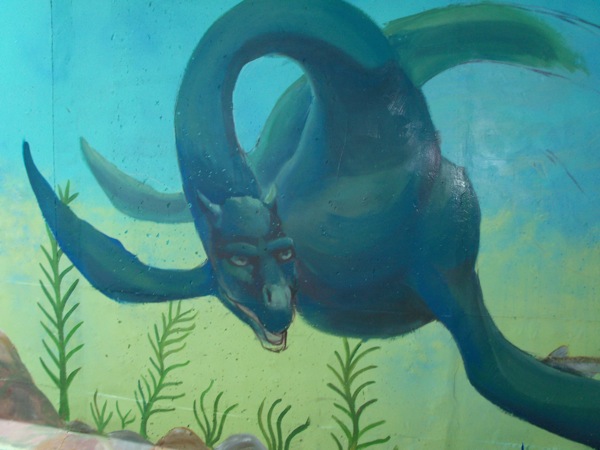 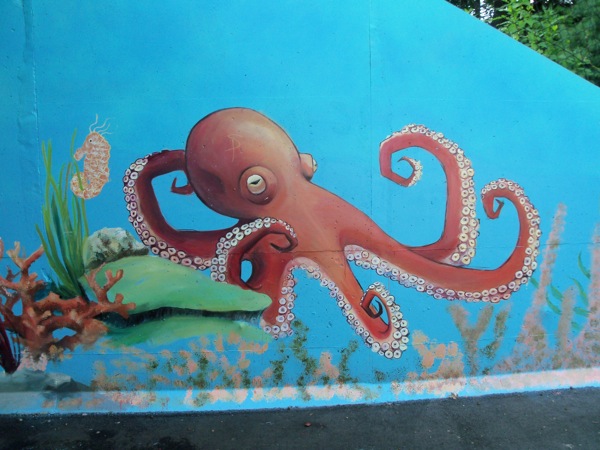 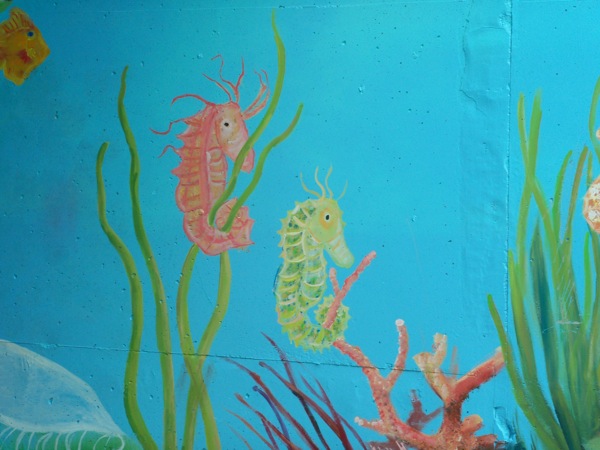 I rode the trail all the way to its northern end, which turns out to be a point in the woods where you hit the Westfield line, and the pavement abruptly ends, leaving one to ride on dirt trail for another quarter mile or so, until reaching a road.  From there, I headed back to route 10, which took me back downtown and to route 20.  I took 20 east again, crossing the Westfield River again, and then turning north on E. Mountain Rd., which took my up a hill past the small Western Mass Hospital, then under the Mass Pike and into the western end of the city of Holyoke.  I kept heading north into Easthampton, where I picked up the Manhan rail trail.  I followed the new extension (opened earlier this year) of that trail up into Northampton, and then took the trusty Norwottuck home.

My total time out was 9 hours, and the total distance: 84 miles!