A Man, a Plan, a Canal Trail

The Farmington Canal Trail is part of what will eventually be continuous recreation trail stretching all the way from New Haven, CT to Northampton, MA.  Currently, that trail runs from the town of Farmington, CT north up to the Massachusetts line, where the Columbia Greenway continues the trail into the city of Westfield.  Including bits of trail in Northampton and Easthampton, as well as some bits in southern Connecticut, more than half the whole thing is complete.

That section connecting Westfield and Farmington is the longest continuous stretch, and is longer than any piece of trail I had previously ridden.  I decided back in July to ride the length of this section down and back.  Since that would be 64 miles round trip by itself, I didn’t want to ride all the way from my house to get to the trail, and then start riding south into CT, as I wouldn’t have been able to do the whole trip in one day.  So I drove to Westfield with my bike and just rode the trail.

On a couple of past rides I rode small portions of this trail, through the town of Southwick and a few miles into CT, but had not gone past the town of East Granby.  I parked by the trail in Westfield and started southward around 9:30am. Right at the point where I had turned around the last time, there was a sculpture that had been installed since my last trip: 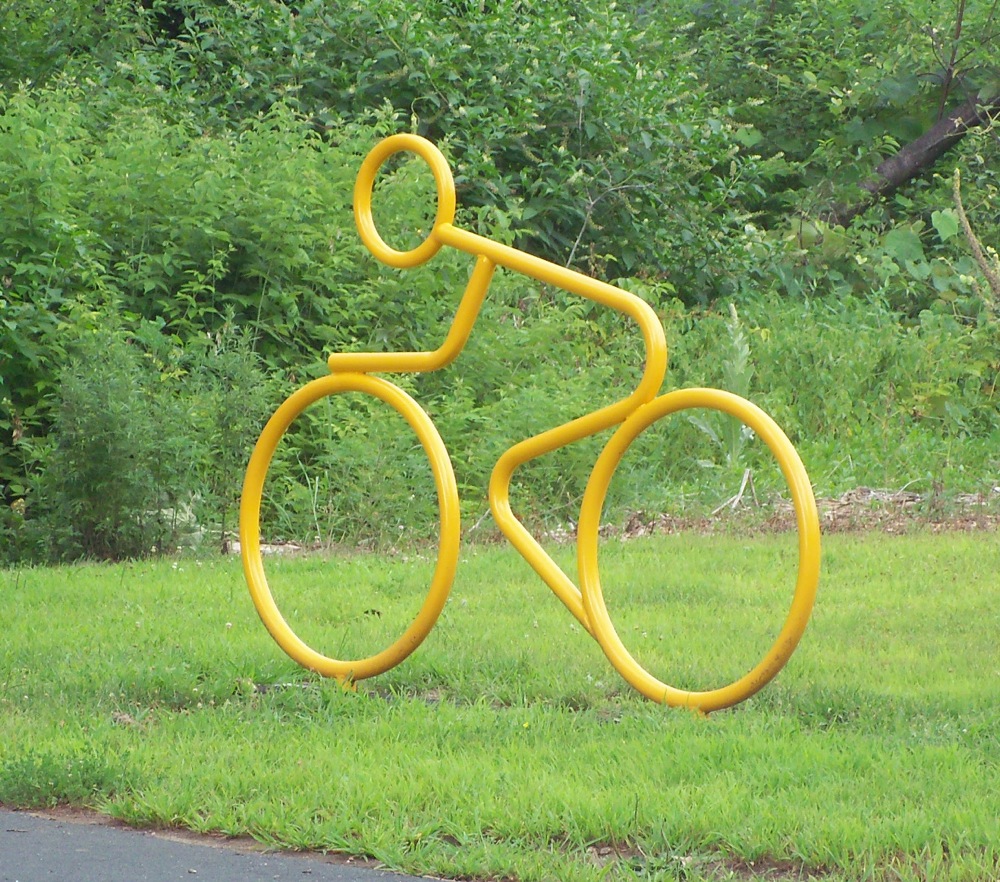 In either East Granby or Granby, soon after I was on a new (to me) part of the trail, the trail crossed over a waterway.  Here is the bike bridge itself: 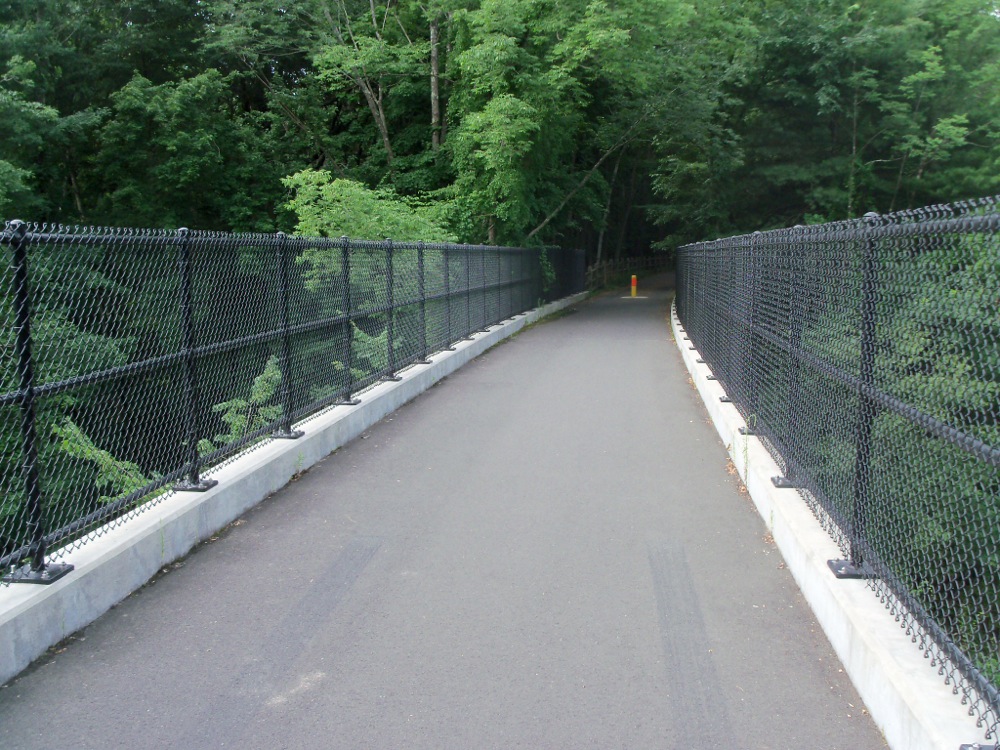 The view to the west of the bridge: 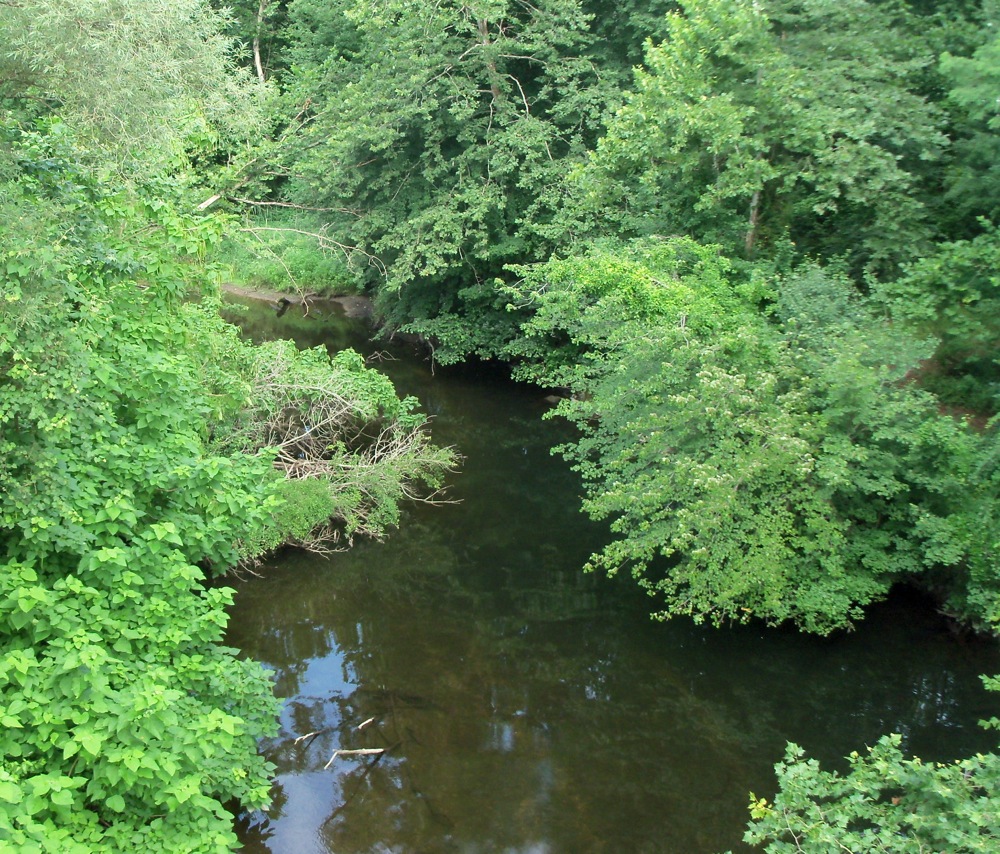 And here is the view to the east, where someone can be seen playing with his dogs in the water: 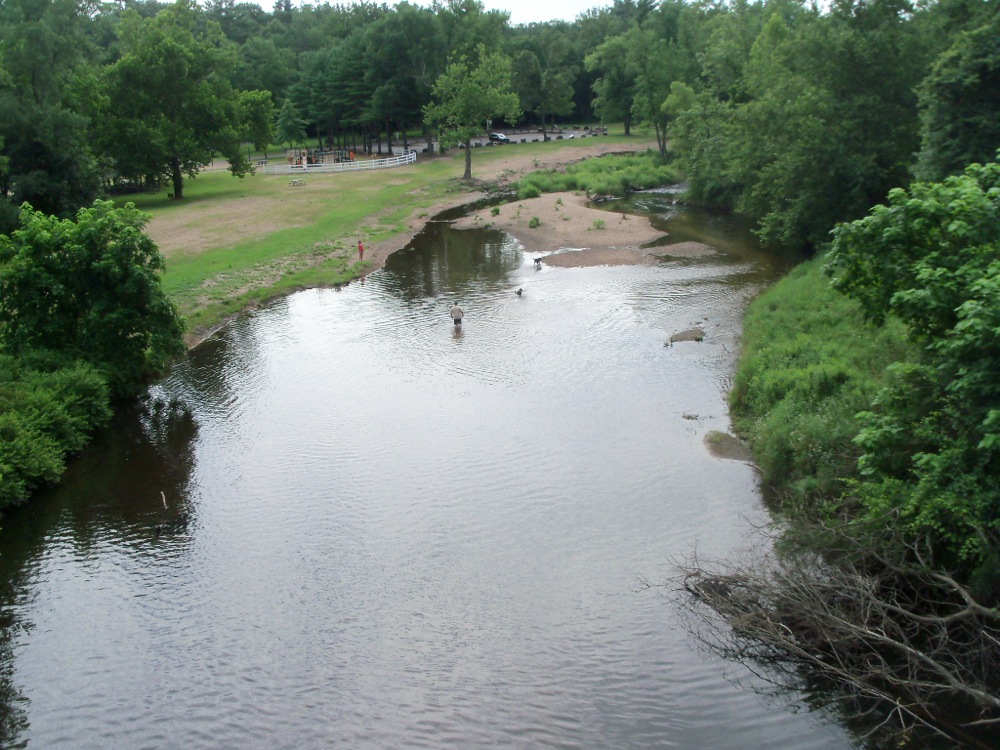 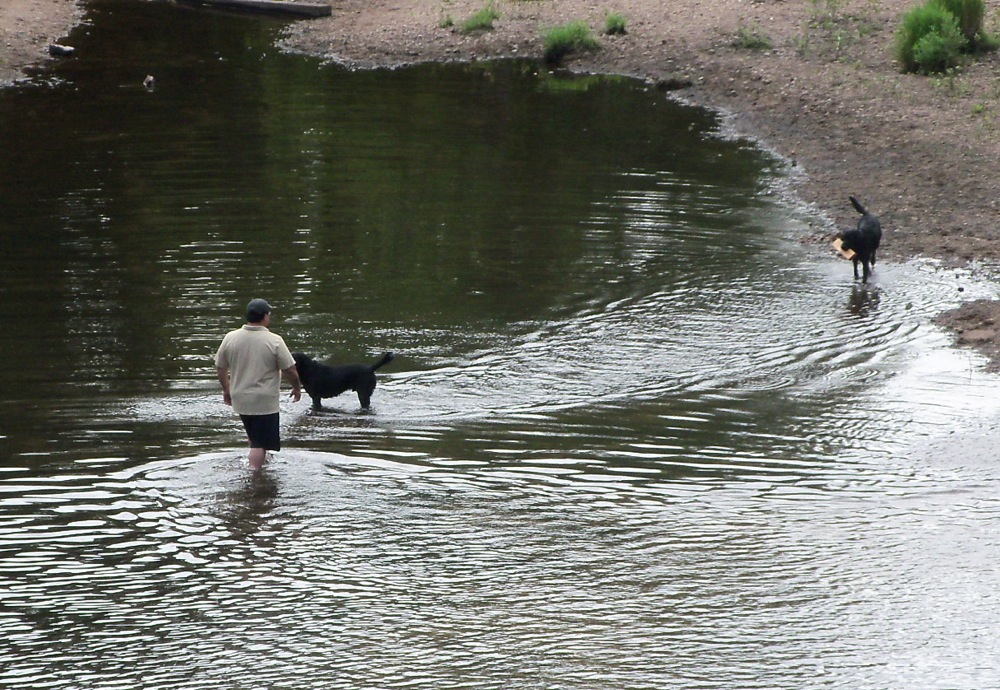 After the Granbys, the trail headed into the town of Simsbury.  I paused by the side of the trail at one point here, where there were some picnic tables, and a pond: 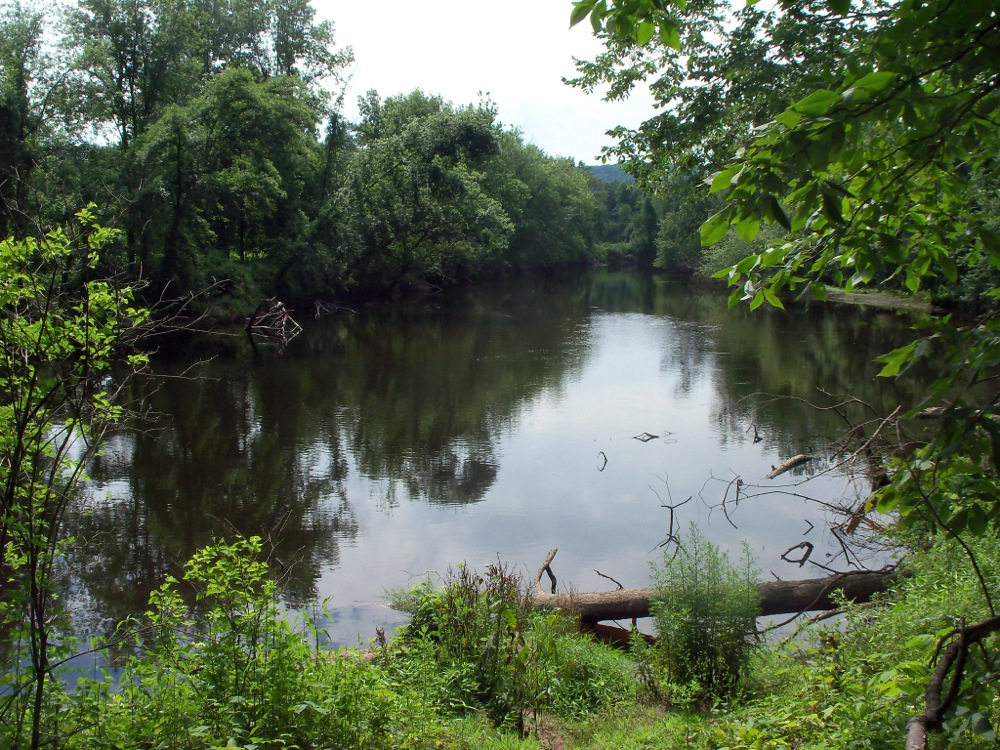 The trail goes through some rural areas of this town, as well as running alongside roads in more settled parts.

Simsbury has a few monuments of its own to bicycling: 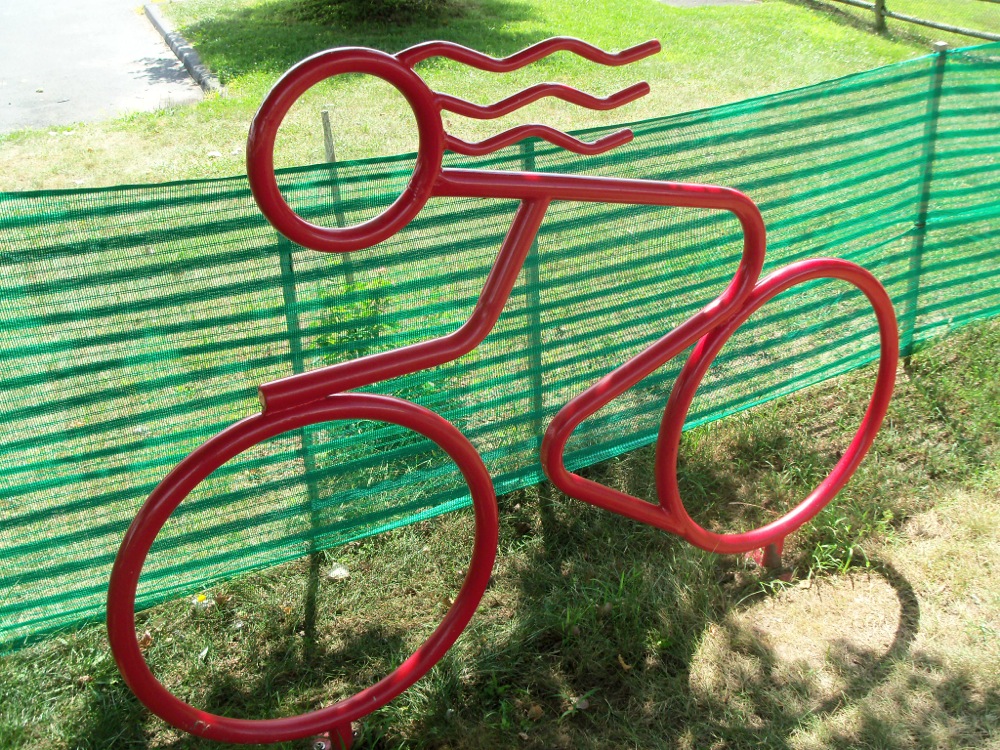 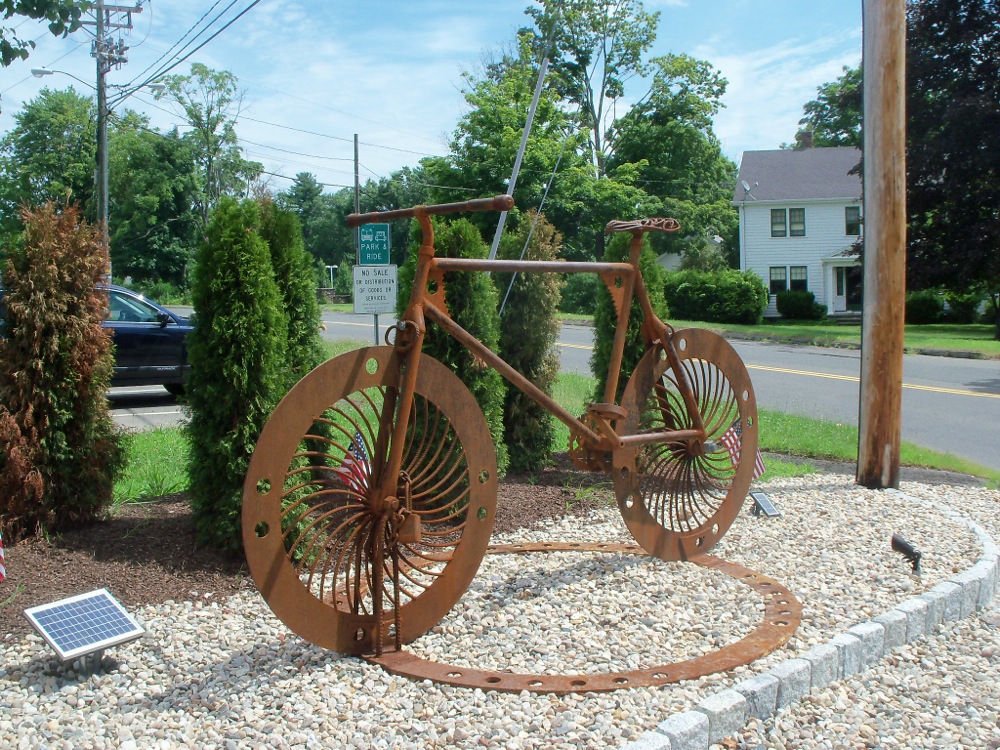 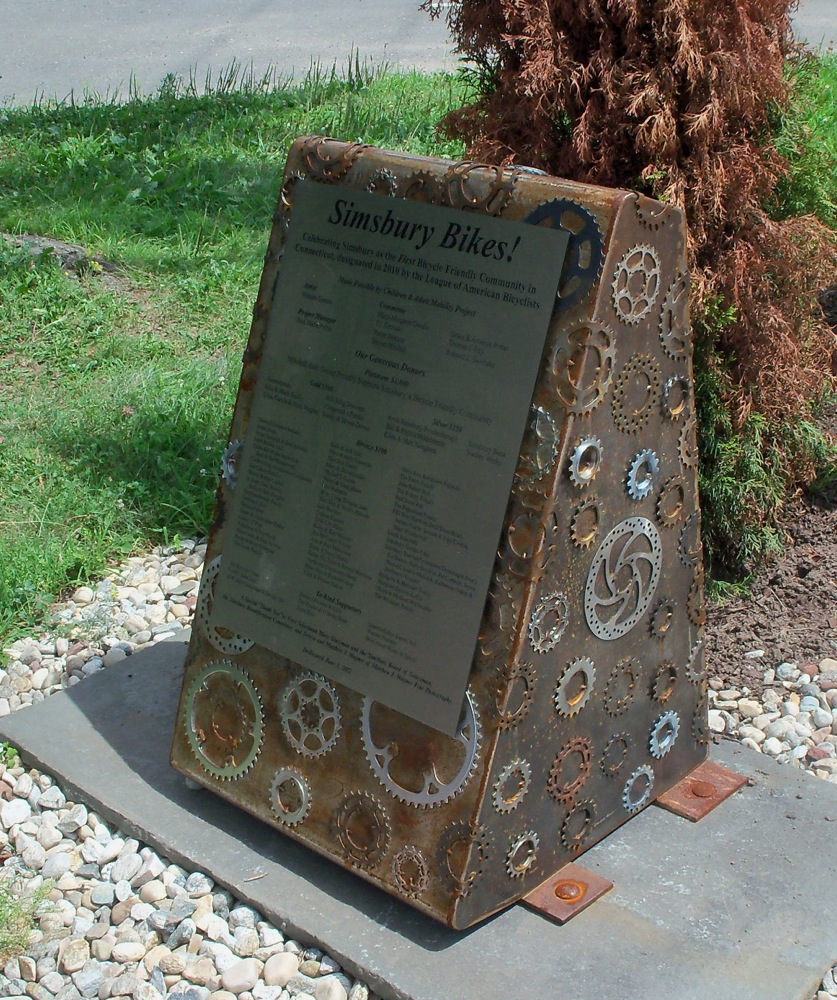 From there, the trail passed through Avon, CT, where the trail goes right by the municipal office buildings (through their parking lot, in fact).  It then gets into Farmington, where another river is crossed: 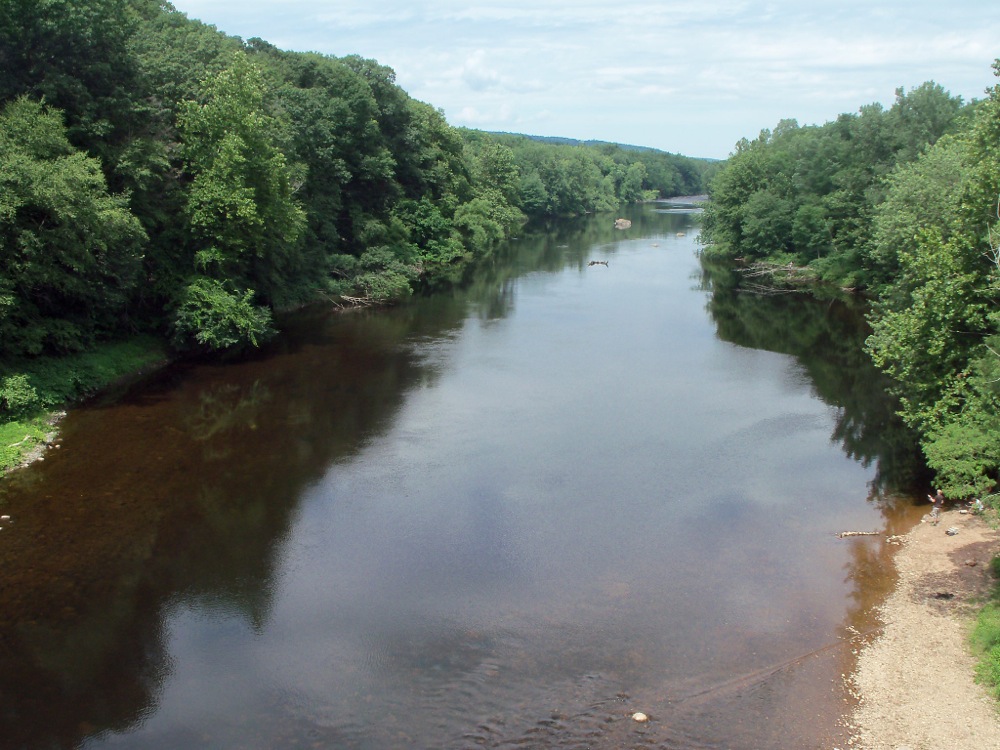 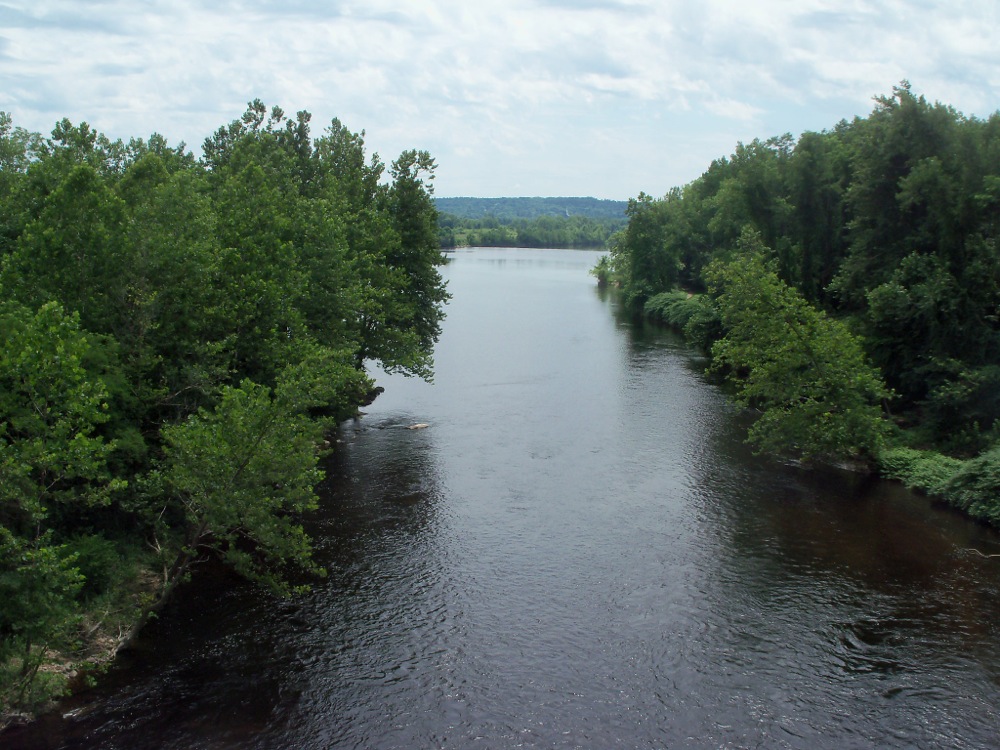 I came to the terminus of the path and took this picture: 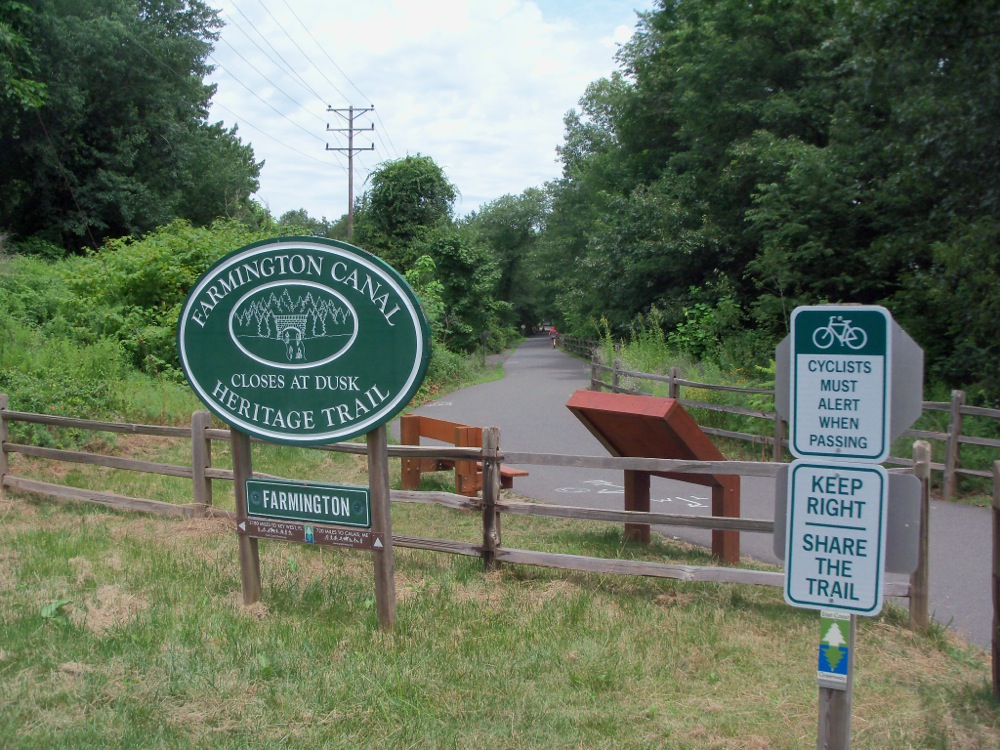 and then headed east along the road into town to get some lunch.

I found a place called Truffles, which offered sandwiches and other deli stuff.  One thing that was quite excellent was that they had fresh lemonade, which I got a large glass of (I was fairly thirsty after biking 32 miles in the heat).

After lunch I made my way back to the trail and headed north again.  On the way north, I photographed the various town line markers that are at the side of the path.

Looking back into Farmington after I left it: 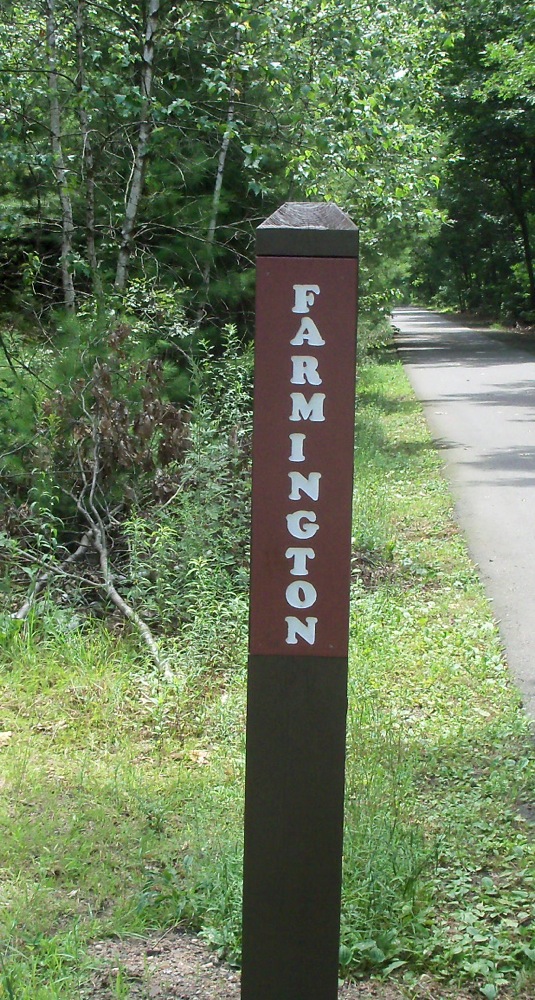 The north edge of Avon: 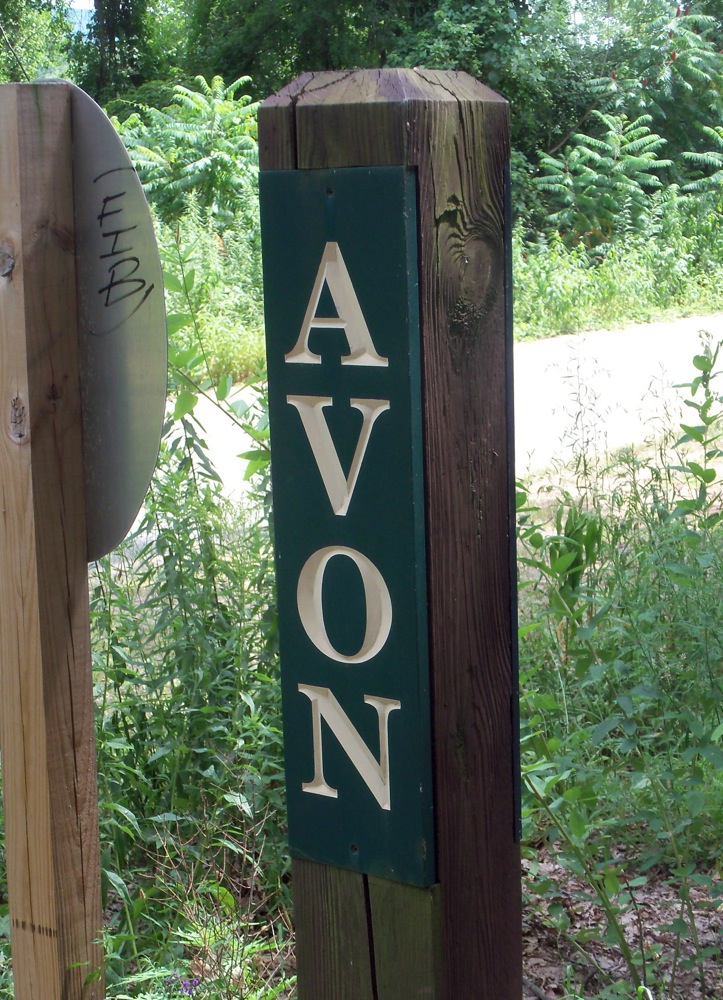 The town of Simsbury has 2 signs: 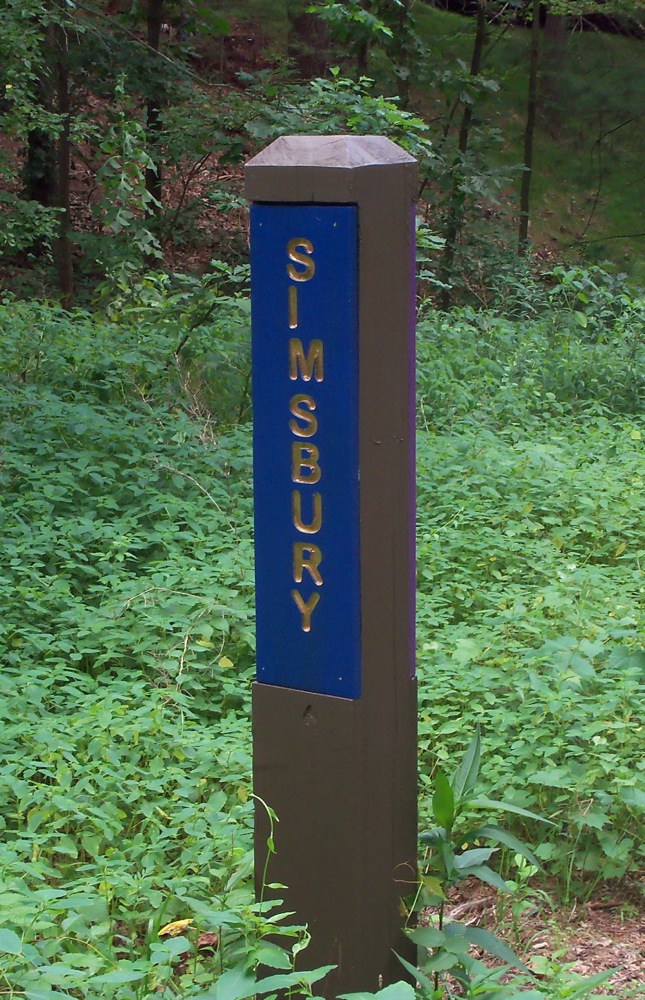 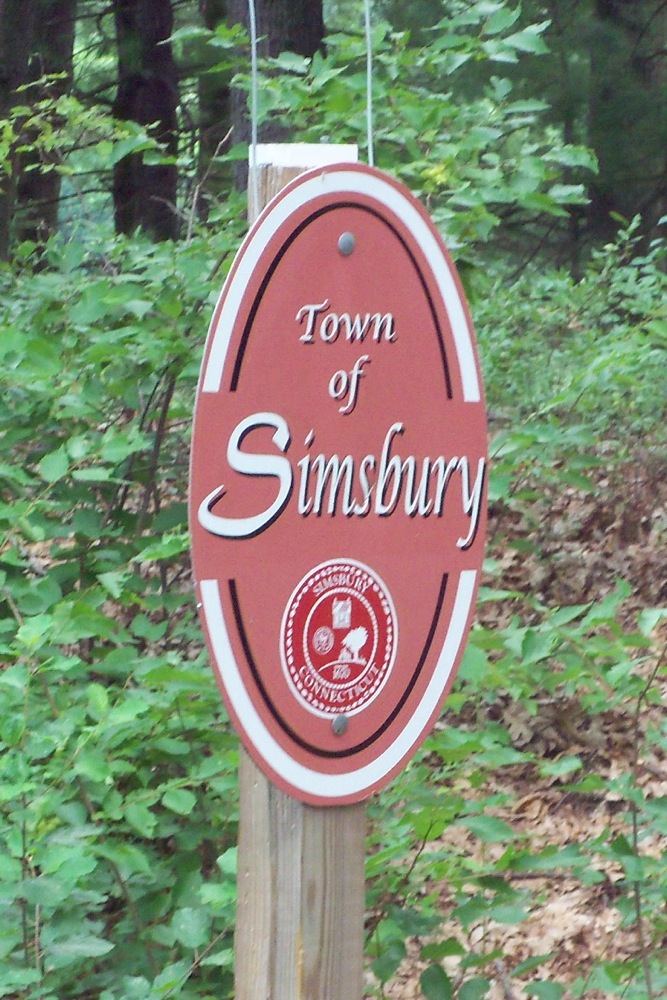 And East Granby is the last place I took a picture of the marker: 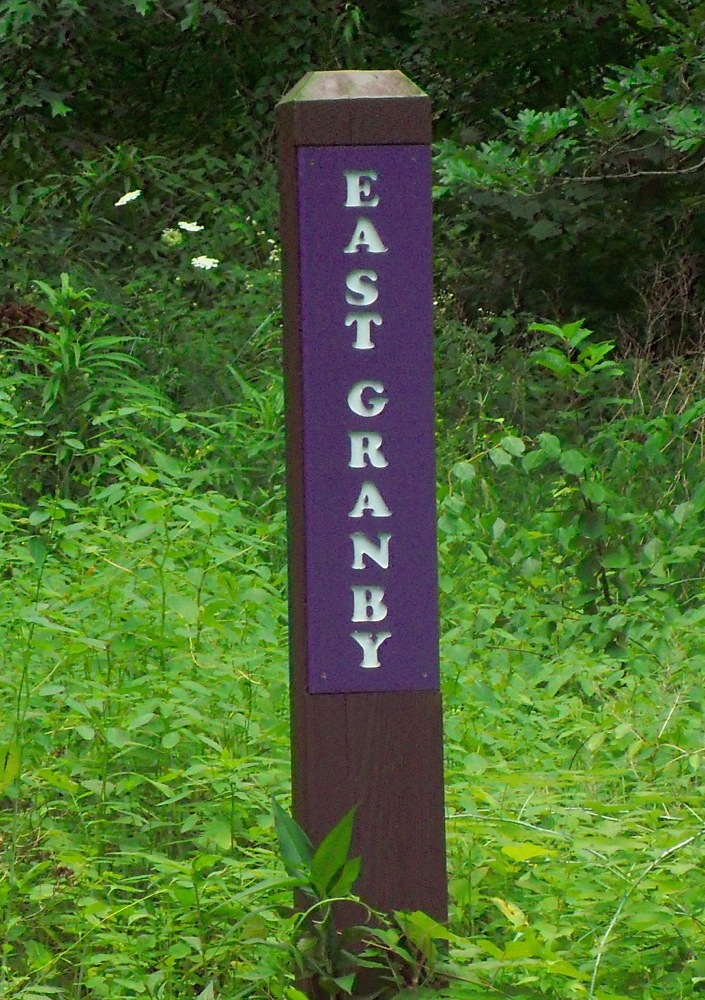 I didn’t get a picture of a Granby marker (the path moves to the west a bit, goes north again, then back east, and continues north, so it goes through a portion of Granby in between 2 sections of East Granby).

It was about 4pm when I got back to the car in Westfield.  I certainly felt like I’d had a workout, but the nice thing about riding so far on a trail is that there isn’t much in the way of hill climbing, so I didn’t get worn out.

Next: a much more hilly ride.