My intention in August and September was to go for a long ride once each weekend in training for my 100-mile ride on 9/17.  Various factors have thwarted that plan, though.  For instance, the weekend of August 27 was when hurricane Irene was passing through New England, so there wasn’t much of any opportunity for riding.

The following weekend (Labor Day weekend), there was the threat of rain again, and I had some other duties to take care of, so I went for a couple of shorter rides.  On that Saturday I went out for the afternoon, intending to get some good hill climbing in, even though I didn’t have enough time to do a long distance.

This ride began similarly to the previous 84-mile one – I headed through Northampton and Westhampton.  This time, though, I left bike paths sooner, going straight along route 66 from Noho.  Also, once I climbed the hill leading into Huntington, I took a side road going downhill (the exact side road that will be used on the actual Food Bank ride).  This road (called simply “County Road”) doesn’t descend constantly, but eventually it ends up being steeper than the downhill portion of 66.  At least, it felt steeper, which could be attributable to its being curvier than the main road.

After laying on the brakes a good deal while headed downhill, I reached route 112 and started heading north.  This route took me along part of the Westfield river, which looked like it had a higher water level than the last time (caused by all the rain from Irene, I’m sure): 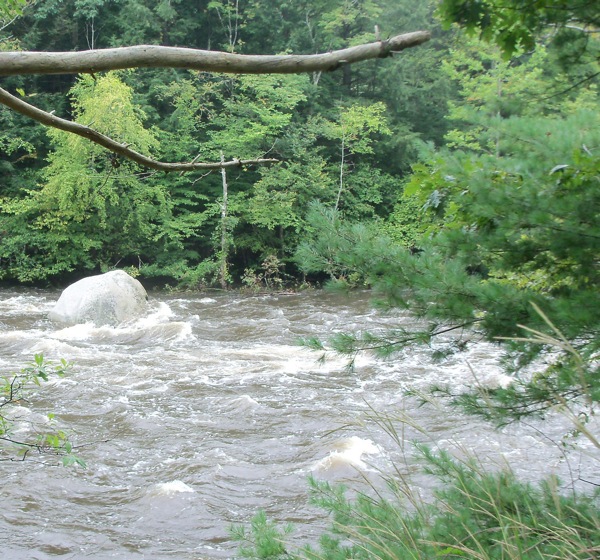 The road then crossed the river.  Here you can see the tree trunks somewhat engulfed by the current: 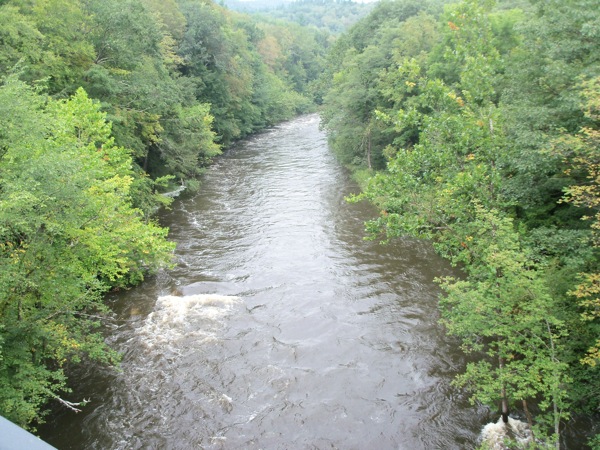 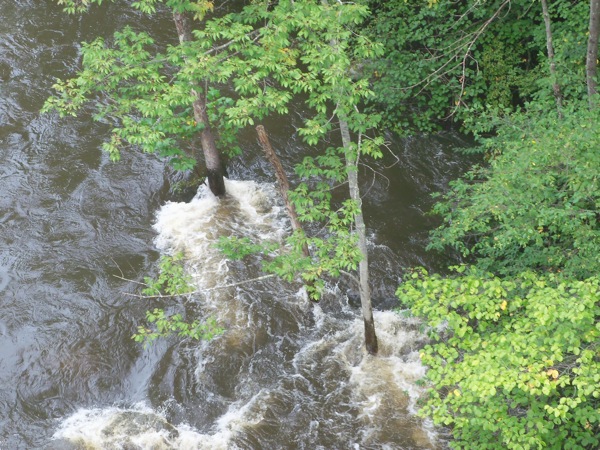 Further along the road, I came to the view of a wider part of the river, along with the Knightville Dam (which I had seen on this road 4 years ago).  In this picture, you can see from the discoloration on the trees on the far side how high the water must have gotten after the hurricane: 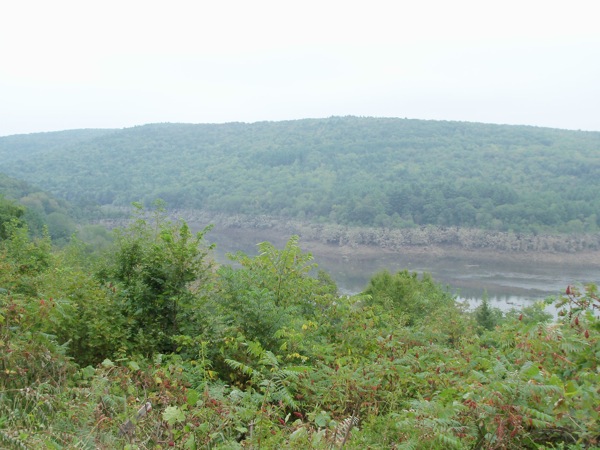 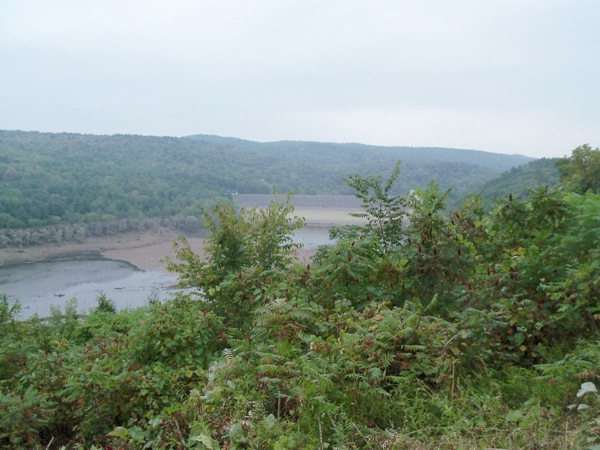 And there is the dam itself: 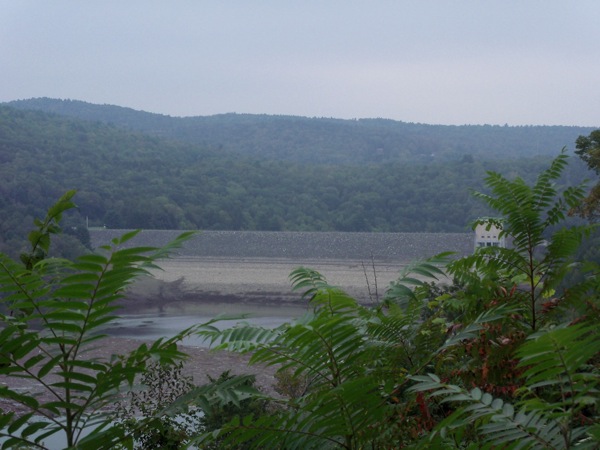 I’m not sure if it was caused by the rains the previous weekend, but the edge of the road seemed to have crumbled away at one spot: 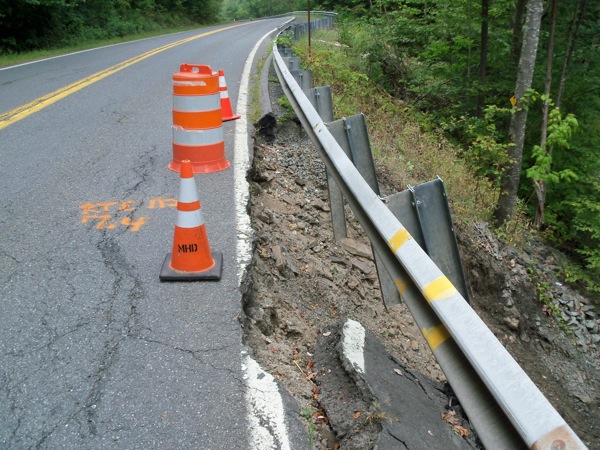 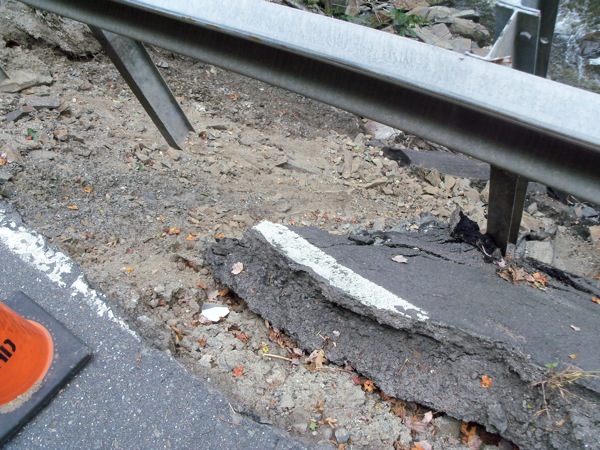 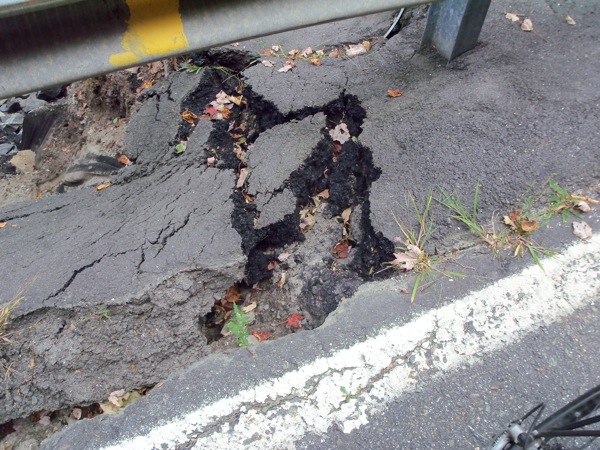 That was right by this nice little waterfall: 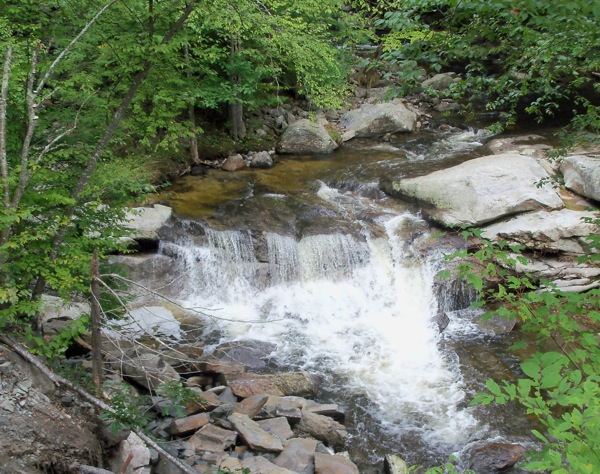 Soon after that, I passed into the town of Worthington, but not for very long.  I left the highway and headed to Ireland St. in Chesterfield, which involved another hill climb (though not quite as bad as the one in Westhampton.  This is a nice country road that goes by an apple orchard once you get up on the ridge.

I wasn’t riding along the top for very long, though, as the road headed downhill quite a bit, ending up at the Chesterfield Gorge at the bottom.  I’ve been to the gorge a couple of times before, and since I didn’t have a lot of time for this ride, I decided not to stop to sightsee.

Just past the gorge, I came to route 143, where I started heading back east.  I passed over the Westfield River again, which looked quite sedate here: 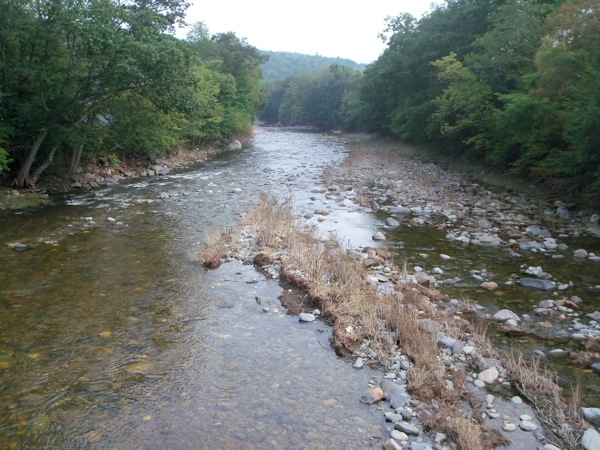 I then began the long climb up to Chesterfield center.  There’s not a lot to say about this climb, except that I had to rest 4 or 5 times, not always getting very far between rests.  At the top, I stopped at the Chesterfield general store for some beverages.  I took pictures of the town hall after starting to ride again: 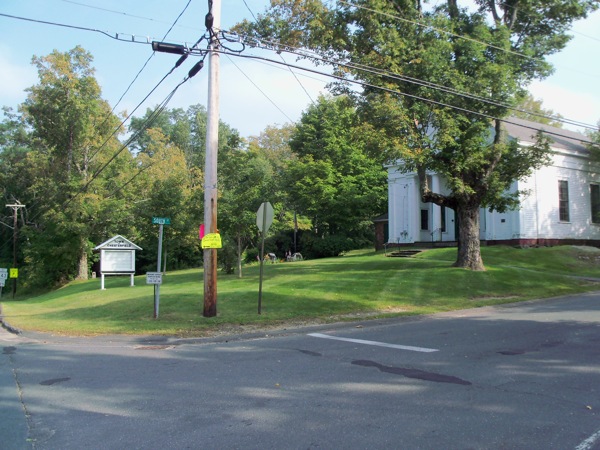 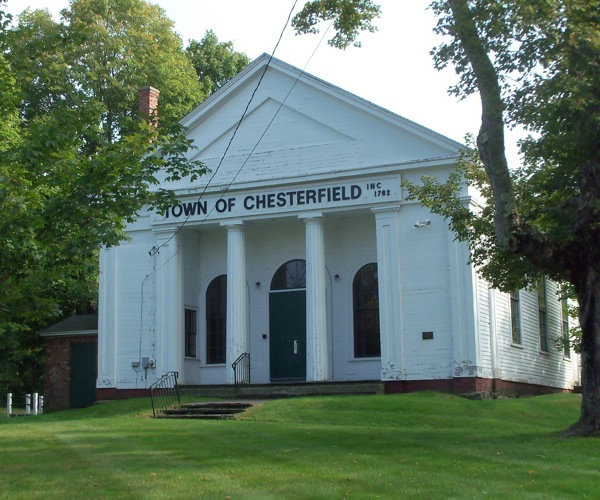 And I noticed that the town has nothing to say: 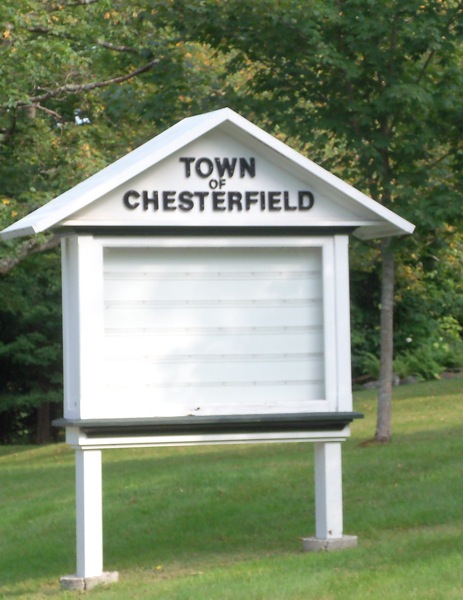 From here it all seemed to be downhill: 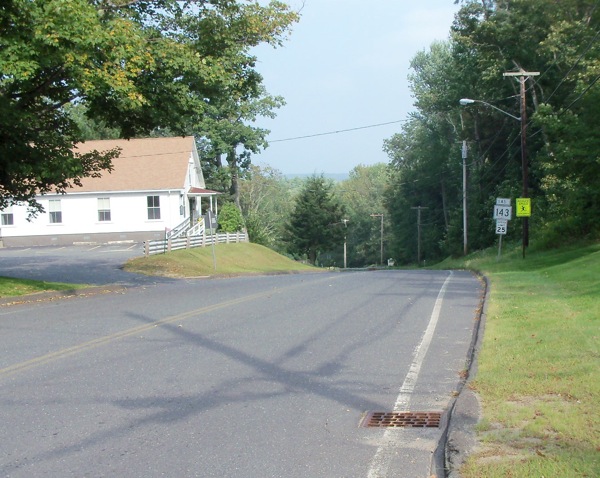 In actuality, there are a couple of small inclines I had to ride up in the otherwise continual descent into Williamsburg, which culminated in reaching route 9.  I passed through Williamsburg center, and then went off on a side road that took me to Leeds, and the Northampton bike trail.

Following the trail back to Hadley, I stopped to rest a couple of times as I was getting a bit sore.  At one stop in Hadley, I heard a rhythmic knocking sound.  I realized there was a woodpecker in a tree above me: 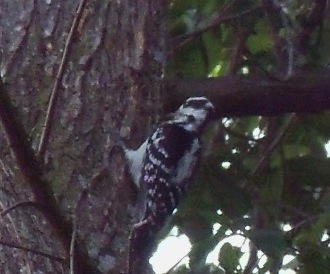 That’s the best picture I managed to get of it – it was a good 20 feet off the ground.

From there, getting home was uneventful.  My total time was 5.5 hours, and distance was 57 miles.