The other night I was cutting up several leeks to make soup.  When I sliced one of them open, I found that there was some waviness inside: 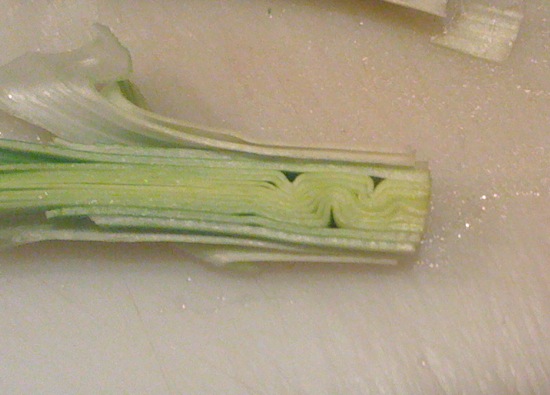 I’m not sure what could have caused this.  It seems like something was pushing down on the middle of the plant, forcing those center layers to buckle.  Maybe it was the snowstorm of a couple weeks ago (this leek came from the CSA we participate in at the nearby Hampshire College Farm Center).  I could imagine a weight of snow on the leek pushing down in such a way as to cause this, and maybe the dirt would have provided enough support to keep the outer layers intact.  This is pure speculation, of course.

By the way, the soup I was making is a pretty common recipe – potato, kale, and leek soup.  My version is based on a recipe out of a cook book (the New Basics Cookbook, page 100, “Winter Vegetable Soup”), but I’ve made so many alterations and omissions that it’s really its own thing now.  Basically, I saute a bunch of leeks (sometimes adding celery in I don’t have a ton of leek) in oil for 10 to 15 minutes, add some thyme and tarragon and saute a bit more, then add salt and many (12-14) cups of water.  Bring that to a boil, and add cubed potatoes (about 5 pounds), and boil until the potatoes are near done, then add a pile of chopped kale, turn off the heat and set aside.  The kale will cook fine with the residual heat.  I soak and cook the chick peas separately (2 cups dried), and then add them after the rest of the soup is done.  The soup is great with a big slice of bread.

Oh, and there was no discernible difference in taste because of the waviness of the leek.