So I flew to Las Vegas yesterday to attend a conference for work.  When was hunting around for fares, I found the best price on Southwest airlines, which I haven’t flown in a very long time.  I was surprised to discover that I could get a direct flight from Connecticut to LV.  The flight out was 6 hours long, but that didn’t bother me much, as the leg room was okay.  Also, they did beverage and snack service more than once (and were generous with the snacks – initially letting each passenger take however many snacks from a box that we wanted).

Because the flight took off in the late afternoon, most of the ride was after dark.  The cool part about flying at night is seeing cities all lit up, and trying to identify them.  I was on the left side at a window, so I was looking south.  At one point, I saw a city that I thought might be Toledo or someplace in Indiana.  Then I suddenly saw a big blank area with no lights, closer to the plane, which I figured had to be water.  “Lake Michigan,” I thought, though then I doubted myself.  Maybe we hadn’t gone that far, and this was Lake Erie?  Suddenly, a member of the flight crew came on the PA and said we were just about to see Chicago.  So there you have it.

Here is a picture of Chicago, looking south: 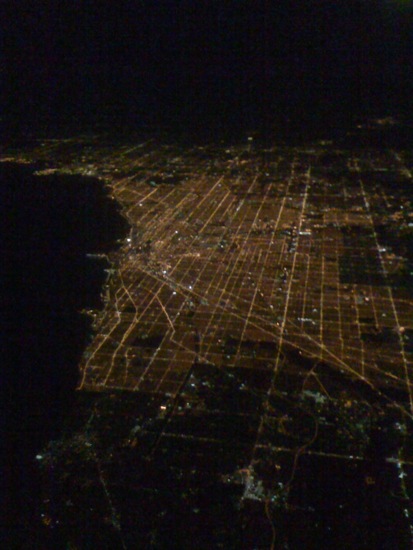 That’s the lake off to the left, there.

Later I believe I identified Omaha, because after we passed it there were no other major concentrations of light until we got within view of Vegas.  Vegas itself has a lot of lights, but I didn’t take pictures as we descended because all gadgets had to be turned off.

As soon as I left the gate, I knew what city I was in: 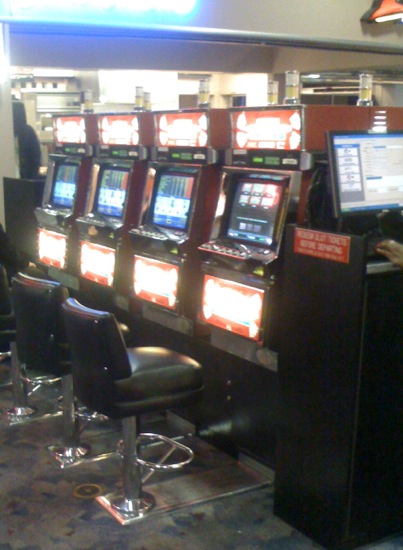 Yes, there are slot machines on the concourse.  In baggage claim, too, as well as other places.

I took a city transit bus to the hotel (cheapest way to go), and checked in.  Didn’t take pics of the hotel itself yet, but I’ll get some tonight (it is a sight, as is just about everything in this town).  Also, I can only upload pics from my cell phone at the moment, as I forgot to pack my regular camera’s USB cable.

I headed for a late dinner around 8:30 pm local time, which is 11:30 where I’m used to, so it was a really late dinner.  It was tasty, though, at a Mexican place in the hotel complex.  As I was going over the menu, they brought chips with 3 kinds of salsa, and 3 salt blends: 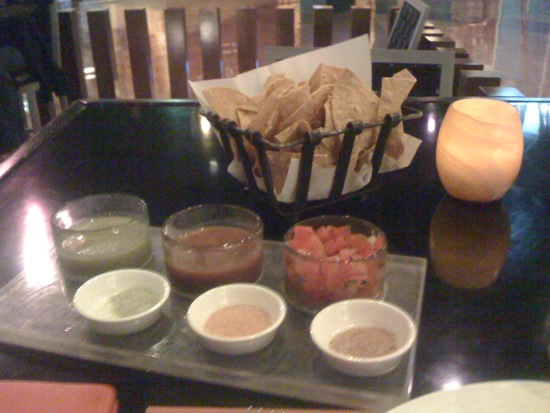 Left to right are salsa verde, a smoky salsa of some kind, and salsa fresca.  The salt on the left has avocado in it, but I don’t remember what the others are (and I hardly had any of the salts).

All for now, as I have another conference session to get to.  More later!