On July 4th I went biking in a big loop.  I first headed south through the town of South Hadley, then west through Holyoke.  I passed through Anniversary Hill Park, where I had biked a few years ago, only this time I did not come out the way I had entered the park, I passed the tower and walked my bike through the woods on a dirt path, emerging on a side street further west.  I then continued on to Easthampton. 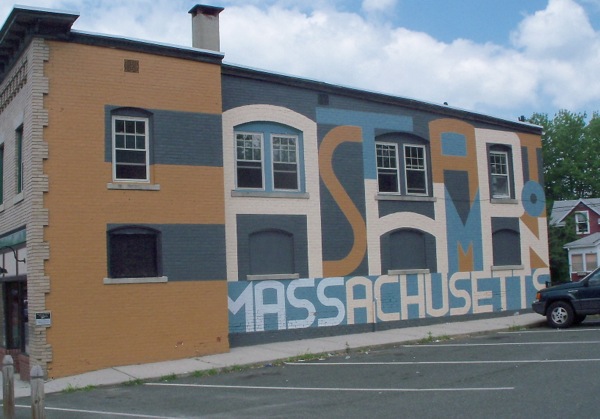 Easthampton was once again this year doing a Bearfest, with bear statues decorated by different artists displayed in front of businesses and in some parks.  Here’s a sampling of the bears I saw: 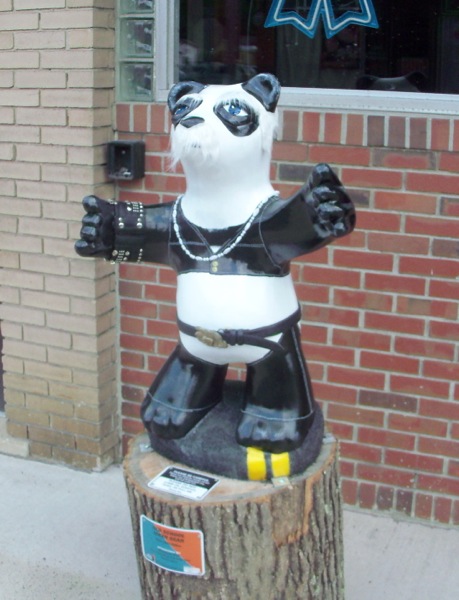 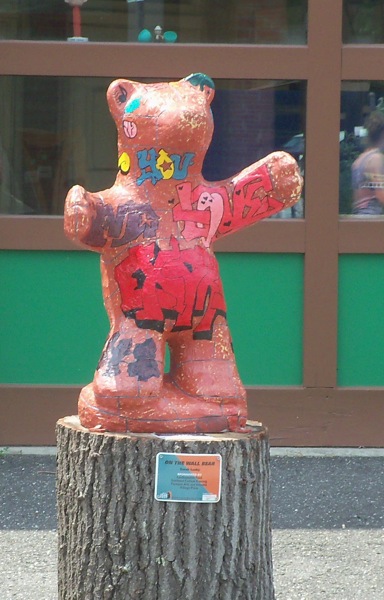 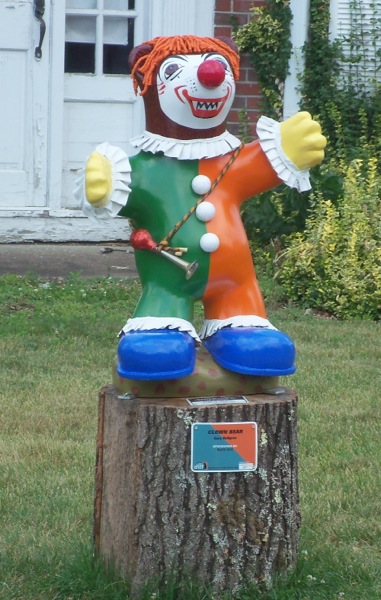 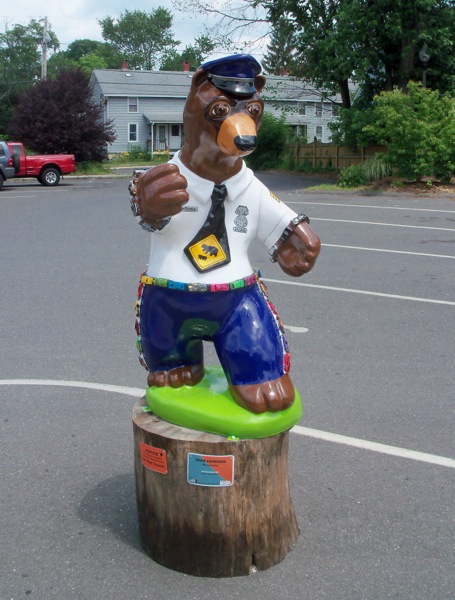 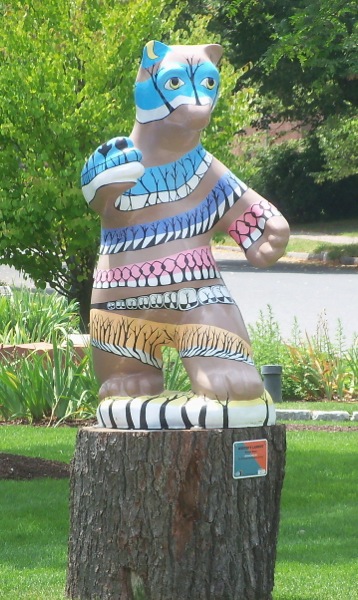 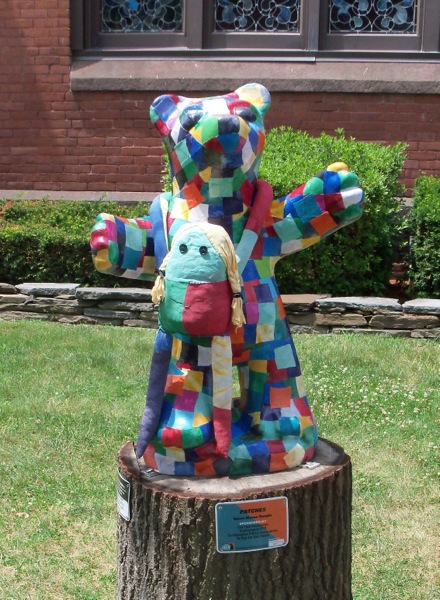 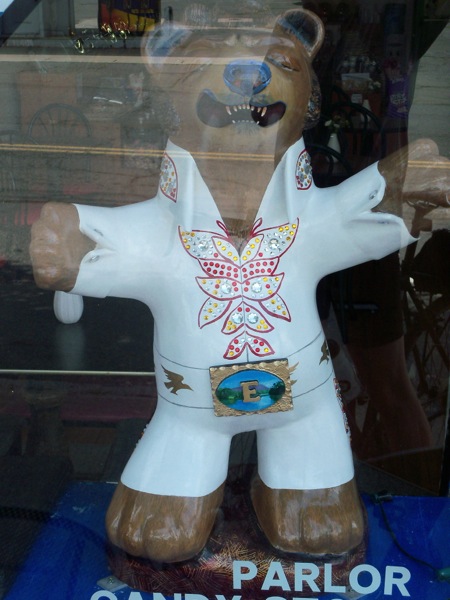 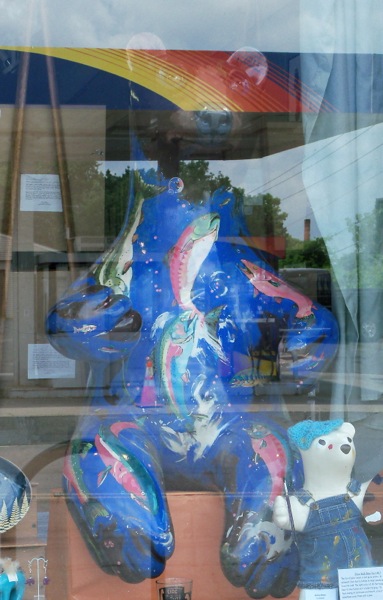 This one by the municipal building did not use the standard statue: 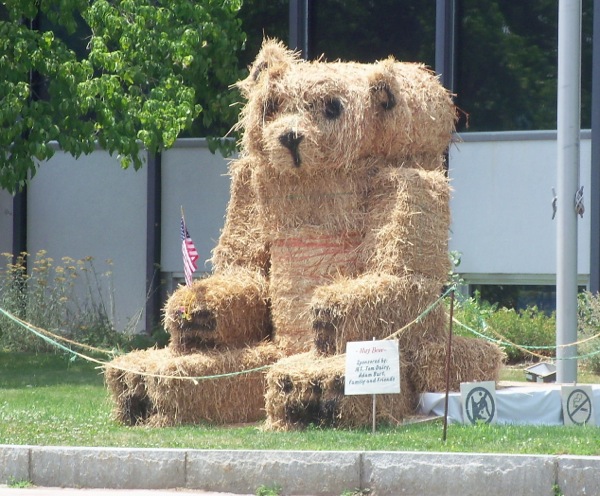 This one’s a bit creepy (mainly because of the size of the bees): 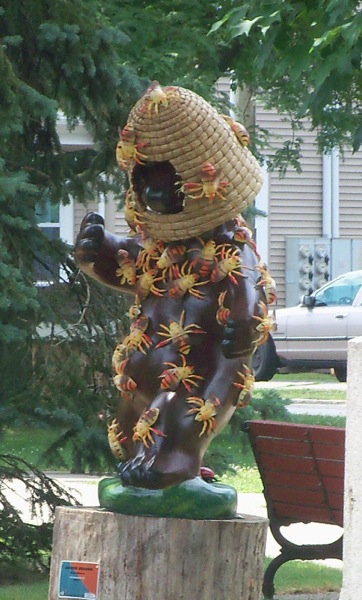 A few were interesting alternatives to painting the statue, like the Steel Clad Bear: 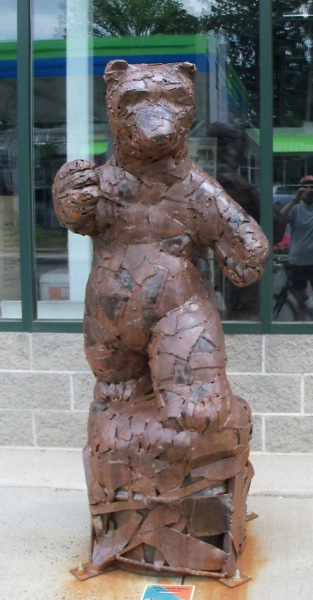 and the Luminous Bear: 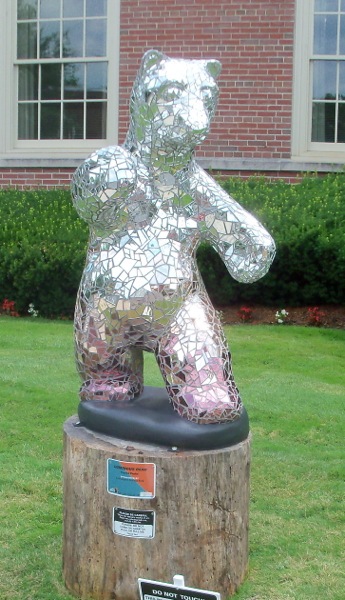 that one came with a warning: 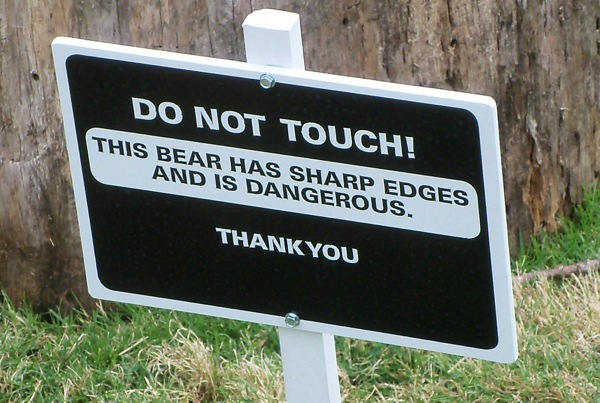 This one seems to be partly carved out of a stone block: 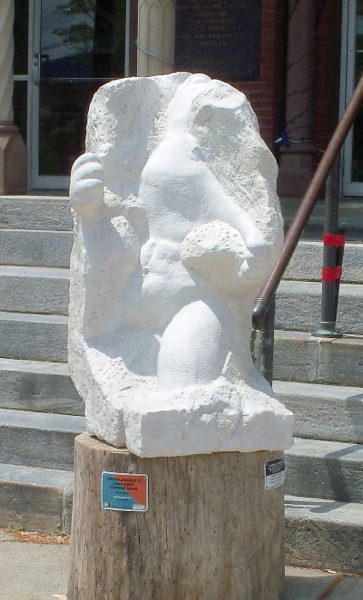 That one was located in front of the old town hall building, which now houses a few arts organizations (and which I think is neat looking): 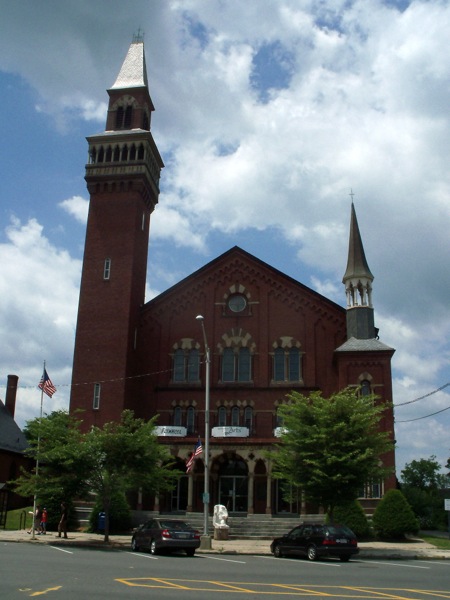 This one (called The Bear Truth) was the most overtly political message, and the saddest bear I saw: 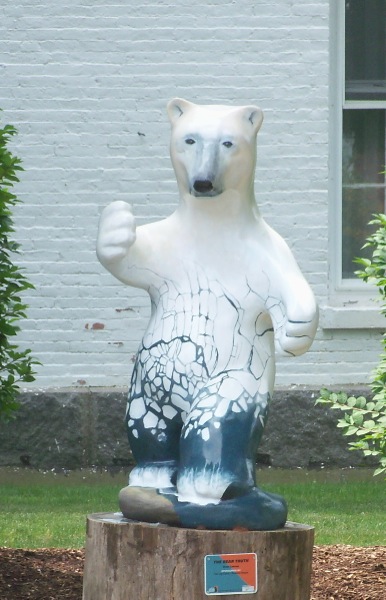 I left downtown and headed for the Acadia Wildlife Refuge, which straddles the line between Easthampton and Northampton.  I had thought that one could bike through the refuge, but that’s not the case.  They do have a bunch of walking trails, though, so I spent some time walking them.  Soon after I entered the woods, I encountered this elevated viewing platform up in the trees: 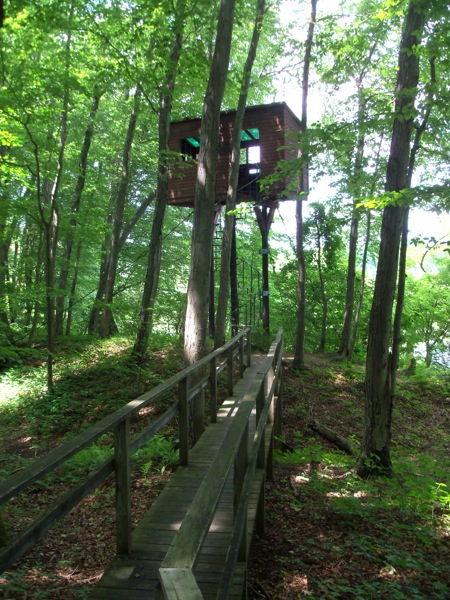 The partly enclosed platform stands on top of a few wooden pilings, and is mostly stabilized by several guy wires.  Despite being stabilized, it (and the metal spiral staircase that leads up to it) sways back and forth a bit.  The motion was a little disconcerting.

Nevertheless, it does offer a nice view of the Mill River and related wetlands: 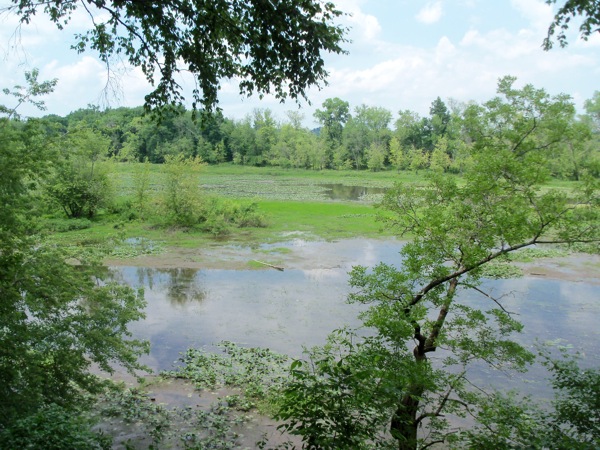 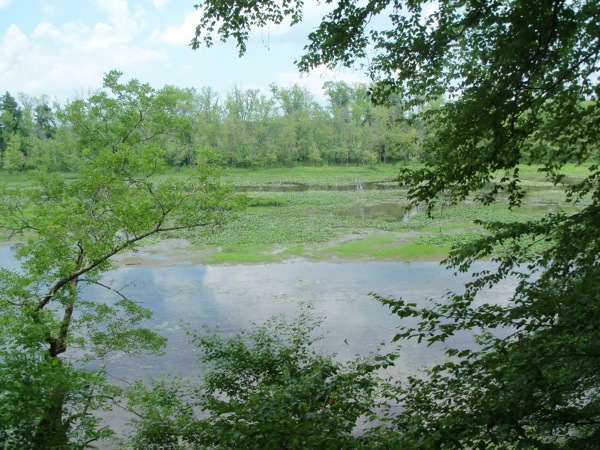 Unfortunately, I didn’t see much wildlife while I was hiking around.  I saw the occasional chipmunk, and encountered quite a number of mosquitoes.  Some of the paths were almost overgrown, as well, so my legs got a bit scratched up.  I left the place a little over an hour after I’d gotten there and rode on toward Noho.

On the way, I passed along the northern edge of the Connecticut River oxbow, and went over the mouth of the Mill River on this little bridge: 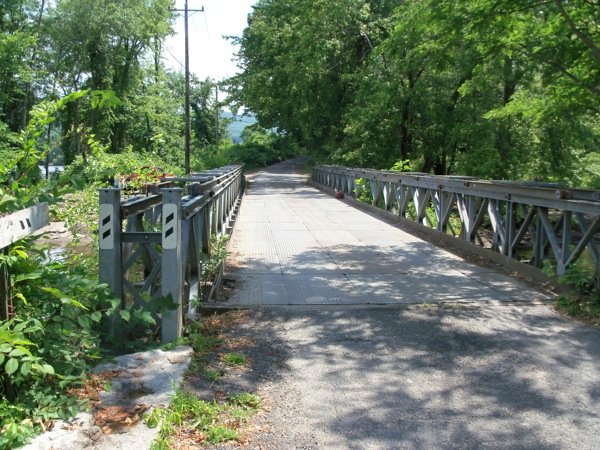 Here is the oxbow itself, with Mt. Nonotuck in the background (to the south): 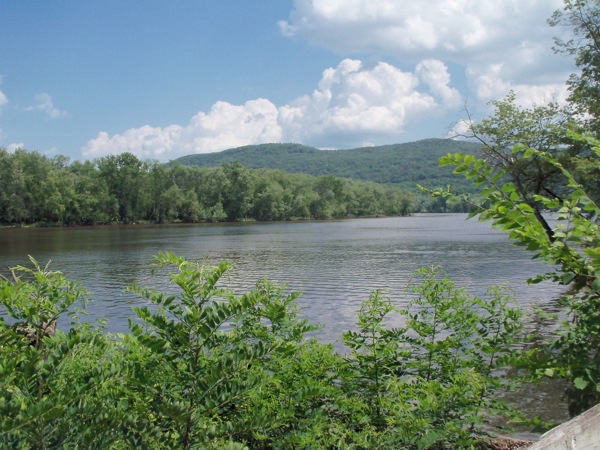 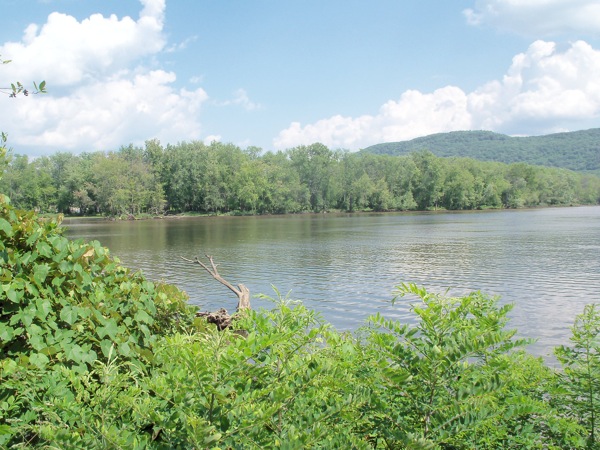 From there I headed up into Northampton, and then home via the usual trails.