Blog : Through the Woods and over the River

Through the Woods and over the River

I did not get a whole lot of cycling in during the month of August, partly because I was out of town a bunch.  My next ride of some import was on Labor Day.

I decided to start out by checking on a trail through the woods in the western part of Holyoke.  If you look up West Cherry Street on google maps, you can see that the road has 2 parts that look like actual streets, which are connected by a dotted line.  I had wondered about that line, and thought I could ride it on my bike, as it was likely an old dirt road.

So I headed west and to the end of one portion of the street, and entered the woodland trail.  It may have once been a decent gravel road, but it is a fairly rough hiking trail these days, so I had to get off the bike pretty soon and walk, sometimes lifting the bike over obstacles such as fallen trees.

That was not the most unfortunate part, though.  There were other trails branching off at various points, so I had to guess at which was the correct way to go.  Even having a general idea that I wanted to go northwest, I still ended up going the wrong way.  At some point I knew it was wrong because I’d been in the woods for too long.

I did find portions that were bikeable, so that helped make some time, and eventually when I emerged from the forest, I recognized where I was – on Apremont Highway near Route 202.  I’d ended up at least a mile south of where I’d intended to be, but this was okay, as I next had planned on heading southwest to Westfield anyway.  So, that’s what I did.

I went due west for a while, into the northwest part of Westfield, and stopped off at a farm store to get something to drink.  THe place had its own brand of soda, with one flavor: blueberry birch.  I certainly could not pass that up!  It was really tasty.

From there I went south toward downtown, because I had recently learned that construction was done on a new trail/esplanade by the Westfield River, and work had finished to turn an old railroad bridge into a pedestrian an bike bridge over the river.

Here is the bridge itself, looking from the northern end (click on pics to embiggen): 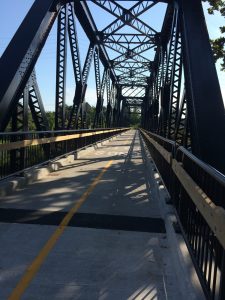 And side views of the bridge from the esplanade (which runs along the southern bank): 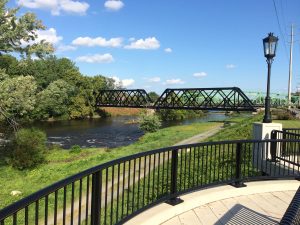 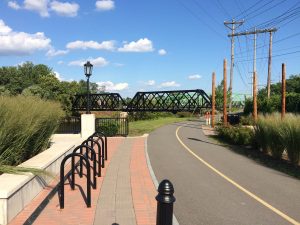 The esplanade itself is pretty nice.  Besides a bit of trail, it has several areas to rest and hang out: 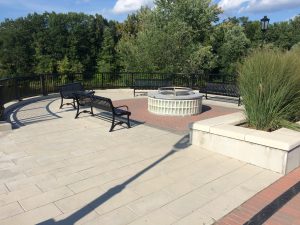 Here’s a view of the river: 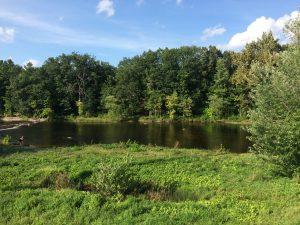 That used to be the only place to walk or bike across the river.

Eventually, the esplanade there will connect with the rest of the City’s trail, which currently starts at the south end of downtown and head south toward Connecticut (more info in general on this trail can be found at Friends of the Columbia Greenway).  The portion yet to be built will have to cross downtown over a few bridges above city streets, and rehabbing those will take a lot of resources.

In any case, I took a less arboreal route home, sticking to roads.  Total for the afternoon was 25 miles of riding/hiking with my bike.