Blog : Training Montage – Cycling Where I Can Get It

Training Montage – Cycling Where I Can Get It

As mentioned in my previous post, I’ve been doing training rides to prepare for Will Bike 4 Food.  Because of a few factors, unlike some previous years, I have not been able to do a lot of long rides during the spring and summer this time.  So I’ve tried to make the rides that I have done count – especially trying to get in hill climbing whenever possible.  Here are brief summaries of a couple of rides that I did manage in July that helped me build strength and endurance.

Also, speaking of the fundraising for the Food Bank, donations have now exceeded my goal.  The total is $1049 – thanks to all those who have given.  I’ll still be matching contributions beyond that amount, so any more donations I get will be doubled (up to my $2K limit).

On Independence Day, I decided to ride up to Chesterfield.  It’s a town whose center is on one of the higher hills in the Pioneer Valley, and so it involves a lot of climbing to get there.  It was not the best day for such a ride, weather-wise, as the temperature got up into the mid-nineties.  Nonetheless, I went and did it.  I rode my usual route from Holyoke to Northampton first, heading straight north on Route 5, and then followed the rail trail out to Leeds.  From there, a few back roads get one started on the climb up to Chesterfield Center, approaching from the southeast.  Because of the heat, I had to stop and rest in the shade several times on the way up.  When I finally did get to the top, I headed for the town general store to get some more water, as I had drunk much of what I’d brought with me.  It turned out that the store was not there anymore – and a local resident told me that the nearest store would be in another town – Williamsburg or Worthington.

Fortunately, there happened to be some activities going on on the town common, including a booth selling hand-made ice cream.  I got some, and asked if they had any water for sale – they didn’t but said that the fire station had been selling bottles of water.  I headed over there, where that sale was technically over, but a firefighter (or maybe the chief) unlocked the station and sold me one of several remaining bottles (which were still cold).

Rejuvenated and rehydrated, I then began the long downhill ride due south, heading into Westhampton.  After all the downhill, there was some level riding, and then a bit more uphill until I got to Outlook Farm, which was my destination for (a late) lunch.  Their grill was closed when I got there, but they had cold sandwiches available, so I was able to eat fine (and enjoy some air conditioning).

From there I went through downtown Easthampton, then via trail back to Route 5 and home to Holyoke.  Total for the day was 50 miles.

On this Sunday, I headed up to Greenfield, MA.  I did not take the most direct route up there, or back, so as to give myself a few more hills to ride.  I started by heading across the Connecticut River into South Hadley, and then went up back roads, stopping by McCray’s Dairy farm, as I wanted to check out their store.  At that farm, I discovered they have a pond and several waterfowl (click to view larger versions of photos): 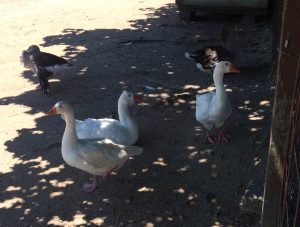 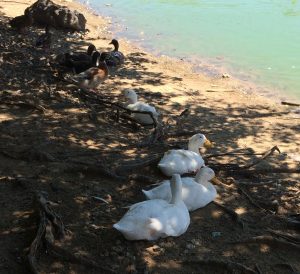 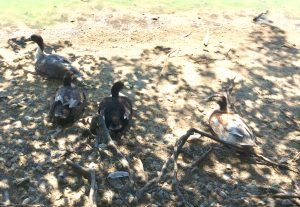 From there, I rode up into Hadley, and stopped off at Flayvors of Cook Farm – our favorite ice cream place.  I was checking the existence of special summer flavors, and ended up getting a cone with peach ice cream.  I then proceeded up Routes 116 and 47 (and some other roads) through Montague Center, and then along the river to the bike trail in the north of Montague.  I took it across the river into Deerfield, rode over to Routes 5/10, and then crossed the Deerfield River into Greenfield.  Another mile or so of riding (and a steep, short hill) put me downtown, where I had lunch at the People’s Pint.  It is a microbrewery, and while I don’t drink beer, I love the place for the sodas they make.  They also encourage cycling.

When I left Greenfield, I went a bit west of town before turning south, and went through some hillier parts of Deerfield and Whately before deciding I’d had almost enough climbing for the day.  I then got back on 5/10 to ride through Hatfield and Northampton, back to Holyoke (there is one hill one has to climb on Route 5 in Holyoke when heading south – it’s not steep, but it is somewhat long).  Total distance for this ride was 68 miles.