Blog : Cartoonist to watch out for

Cartoonist to watch out for

Last month I drove up to Vermont for the first time since we moved to Massachusetts.Â  I had only been in Vermont once before, on a camping trip with my father and brother about 17 years or so ago.

This trip was to Brattleboro, which is not far away – only 45 minutes from Noho.Â  I hadn’t made it up there during the previous 2 years simply because I didn’t have a reason to go.Â  This time I had a pretty good reason – Alison Bechdel was giving a reading and signing as part of the tour for the paperback edition of her graphic novel Fun Home.

She did a tour last year when the book first came out in hardcover, and she actually appeared in Northampton that time.Â  Unfortunately for me, I didn’t know she was appearing there until the day after it happened.Â  So this year I was determined to get to see her.

She was appearing at a dinky little theater right on the Connecticut River.Â  You can see across to the large hills on the New Hampshire side: 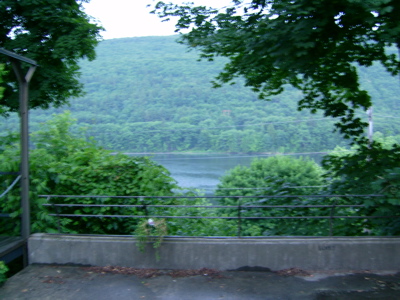 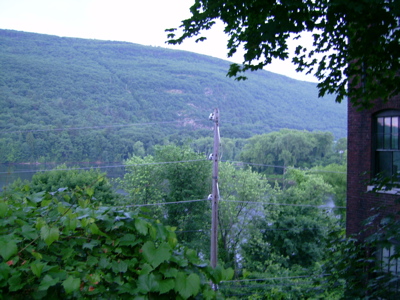 And just outside the entrance to the place is this interesting railing: 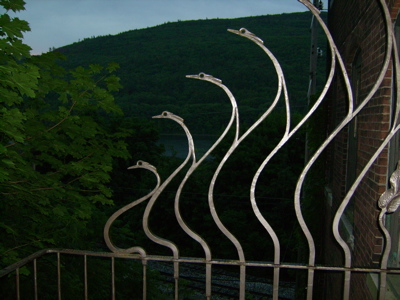 The presentation was in a few sections.Â  She read a section of the book while showing slides of some of the panels.Â  Then she showed a slideshow that documented her creative process, including reference photos she took.Â  She apparently took lots and lots and lots of reference photos for the book, including several of herself dressed as her father, for drawing him in the story.

After that slideshow, she did another reading section with projected panels, and then took questions.Â  After that, it was time for the signing.Â  I got Fun Home and the most recent DtWoF book signed, and then took a few pictures of her as souvenirs.Â  I probably shouldn’t have gone without a flash, though, as my pix turned out blurry.Â  Here is the best one (i.e. the only one where her head isn’t blurry): 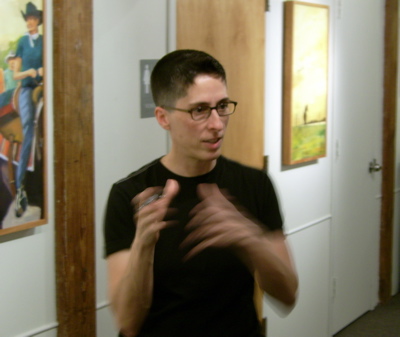 It was a very fun evening, and I highly recommend Fun Home to everyone (though most who read this blog have probably already read it, or at least know about Alison).
I’ve been reading her stuff for well over a decade (maybe 15 years at this point), and think she’s just awesome.Â  It was a little hard not to be starstruck when I talked to her.

Yeah, so go read some Bechdel if you never have. Â  🙂