The weekend before last, I went on a hike through the Mt. Tom state reservation with a friend I hadn’t seen in several years. The path of this hike is also known as Section 6 of the M-M Trail, and passes over 3 or 4 mountains (depending on how you count).

This is the first hike that I’ve done on the West side of the river (which is the side I’ve been living on for nearly a year). I think it’s one of the most traveled sections, and the summit of Mt. Tom itself was voted as having the Best Views in this year’s reader poll in the Valley Advocate. Which makes it even stranger that the trail blazes seem to be farther apart in this section than others, and that the trail is confusing to follow at times.

We began on Route 141 in Holyoke, at the Southwestern end of the trail section, and headed Northeast into the woods. The land slopes up gradually for a while, then starts to get a lot steeper. After one somewhat steep climb, we came to a wide sort of switchback piece of path, and the blazes seemed to indicate that we should head downhill for a bit. This seemed odd, but we went that way, and then came to a double-blaze (which indicates a change in trail direction), but there was no side trail to take. If we went in the same direction, there were no more blazes. We started to head upward , back the way we came, and ran into another hiker. We asked him about the path of the M-M Trail, but I’m not sure if he got what we were saying (he said he was hard of hearing). He asked if we were trying to get to the summit, and we said yes, and he indicated that we should keeping going up this path. So the correct way was up the gradual switchback. As we continued up that way, we found trail blazes as the trail got steep again.

After 45 minutes of hiking, we were most of the way up the mountain, and came to the first lookout point. I took some pictures of the view, looking mostly South: 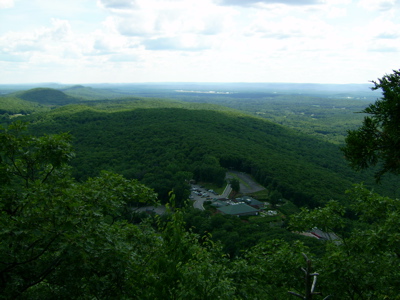 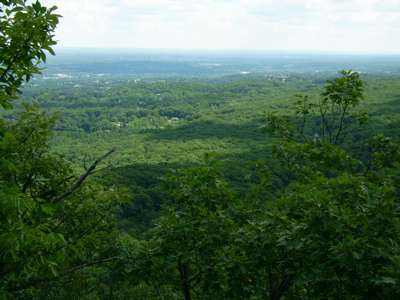 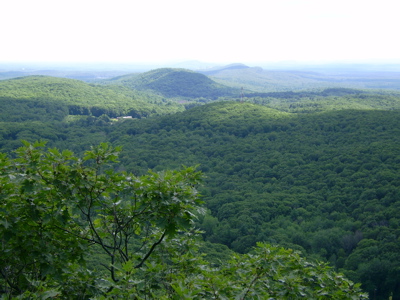 At this same point, we started to notice hawks flying around. We moved further up the path to a more level lookout, where the birds were flying directly above and in front of us. It was a little difficult to get non-blurry pictures of them in flight, but here are a few silhouettes: 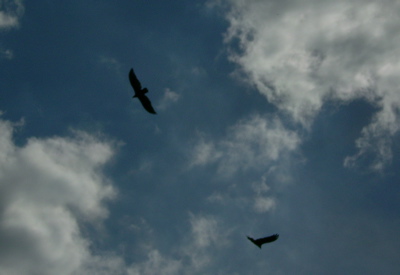 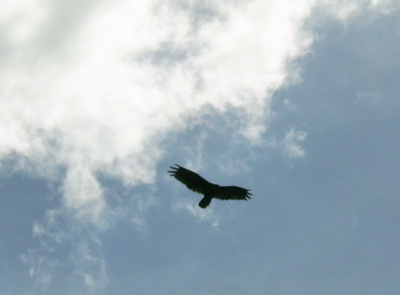 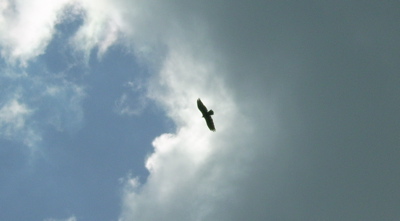 It’s a good thing those clouds were present, otherwise the sun would have been right behind the hawks.

Soon after that point, we reached the summit of Mt. Tom, the highest point of the day’s hike. The top of the mountain is occupied by a large gaggle of radio, tv, and cell towers (none of which I took a picture of). Looking away from the towers, though, yield some views that are pretty cool: 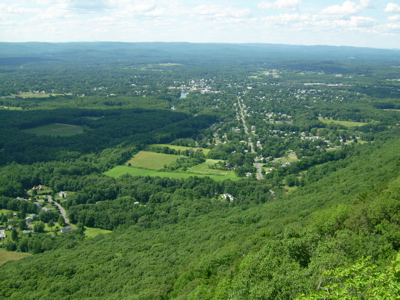 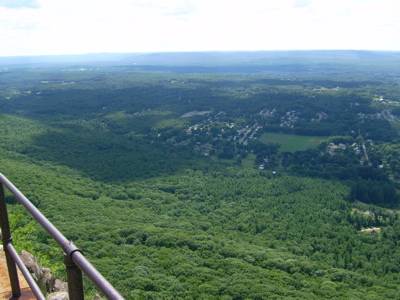 These views are looking mostly West, at the town of Easthampton. Apparently, this summit was once the site of a hotel, which is why there is a crumbling concrete platform with handrail along the edge of the cliff (the set of radio towers is behind a chain-link fence). Found along this railing is: 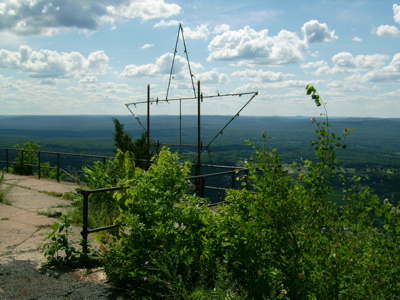 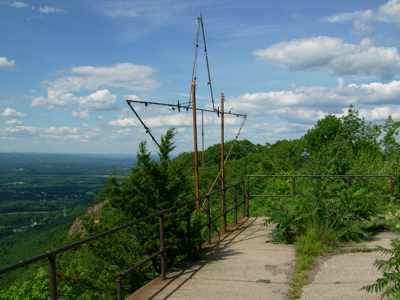 The star has some lightbulbs strung on it, though it’s actually more empty light sockets than sockets with intact bulbs. I have no idea if this thing is ever lit up – I think you’d have to be in Easthampton to see it, and I haven’t really been there at night.

Soon after this, we spent some more time wandering around, trying to find the blazes that indicated the continuation of our trail. The problem is a combination of not enough blazes and a few trails that aren’t the path of the M-M. Eventually we located the path continuing very close to the cliff edge from a point that looks like a dead-end lookout until you’re up near the edge.

There are a number of places along these cliffs where you can see broken and eroded rock faces: 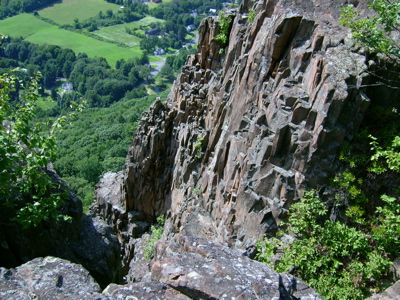 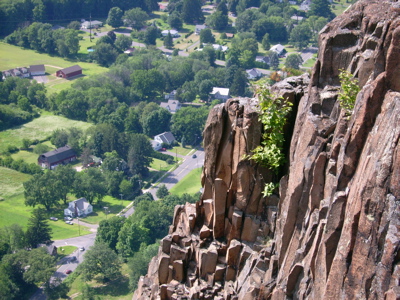 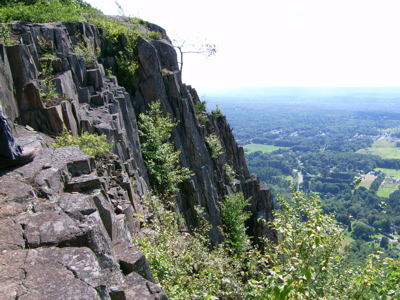 The land levels off for a while until the next peak, Whiting Peak, is reached. A little before Whiting, there is a windmill: 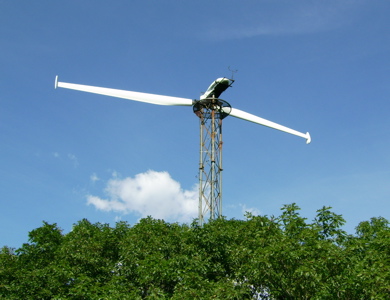 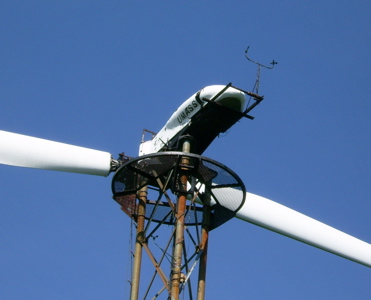 As you can see from the close-up, it’s owned by UMass. Frankly, though this is described by the trail guide as a windmill, and marked as such on maps, it looked to me like it wouldn’t actually be able to rotate (and it certainly wasn’t doing so when we saw it). Maybe the blades can be moved into a different position for that.

From there we passed Whiting Peak, and descended a long way to the road that allows cars to access much of the reservation. Then we headed up Goat’s Peak. We didn’t realize when we had reached the peak, because there is supposed to be a lookout tower, which we never saw. We concluded later that it must be off a side path a bit, and obscured by trees. Next time I’m up there, I’ll know where to look for it.

The last mountain in this section is Mt. Nonotuck. The trail doesn’t go to the summit, but skirts near it at a slightly lower elevation. There is an old road that one can hike up to the summit, where there are apparently ruins of another old hotel, but we opted not to take the side trip, as we were both pretty tired at that point (we’d been hiking for close to 4 hours), and getting low on water. Speaking of water, though, just before this road is a lookout with a view to the North of the river’s oxbow: 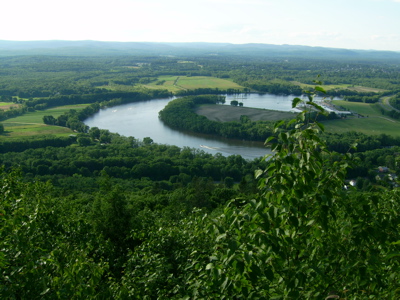 So then we continued on the trail down the mountain, onto the street in a residential neighborhood, past I-91, and to the other car parked on route 5.