Alternate title for this post: “Another nail in the coffin of MS.”

Yesterday I did the big ride, and it was quite a ride. First off, I want to thank again everyone who donated. In supporting my effort, you’ve helped fund more MS research and advocacy to the tune of $711.00. Pretty good considering that last year’s ride had an average fundraising total of $660 per rider.

The day started early, as I needed to leave the house around 7:00 to drive out to Pittsfield. I actually left around 7:10. I have a bike-carrying rack that attaches to the trunk lid of the car, but this was the first time I’ve carried my bike on the freeway with it. Things were fine as I headed down I-91, but then I got on the Mass Pike (I-90), and as I got back up to speed, one of the bungie cords got loose, and the back end of the bike started to move up the pole of the rack. I had to pull over and secure the bike better. At least now I know how to properly attach the bike for 65 MPH driving.

Because of that stop and the late start, I got to the ride location at 8:20, 40 minutes before my ride would start. Between checking in, loading up the bike, putting on my number, applying sunscreen, hitting the restroom, and grabbing a cider doughnut from the food table, that was barely enough time. Once I lined up with the other 50-mile riders, I had about a minute to snap this picture:

I didn’t count, but there seemed to be 20-25 other riders at the start with me. A few more people passed me after the ride began, though, so there were some stragglers who started after the group did.

We started out riding West, passing the Pittsfield airport. The ride then headed South, passing a local apple orchard (from which the aforementioned doughnuts had come). I quickly ended up behind other bikers in the pack, largely I think because they all had road bikes and mine is a mountain bike. However, I also slowed myself down by stopping to take pictures along the way, starting with this little marsh a couple of miles in: 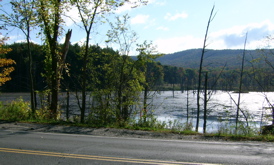 We were given a cue sheet for the ride that listed all the turns to take and some landmarks we’d pass, and how far to go after each step. In addition, there were periodic paint markings on the ground (‘MS’ plus an arrow), showing which way to go at intersections, and paper arrow signs on sticks or poles whenever a change of direction was required. Somehow I didn’t see the arrows for the first major turn, but there were some volunteers directing traffic there who pointed me in the right direction.

The ride entered the town of Richmond, and took a short loop to the North before heading South again (presumably this loop helped pad the distance of the routes). Along the loop I got a nice view of some mountain: 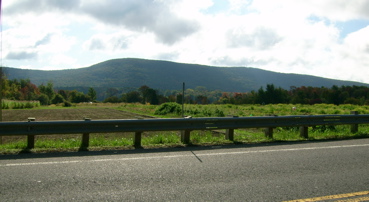 I’ll warn you now: I don’t know the names of any of the peaks I saw or photographed on the ride. Perhaps if I spend more time in the Berkshires in the future, I’ll get to know them. The route was somewhat hilly, though the climbs were all pretty gradual and not too long. I was able to make fairly good time, and once I really got warmed up I could head up the inclines a little faster.

Here’s another peak I shot, seen across a farm field: 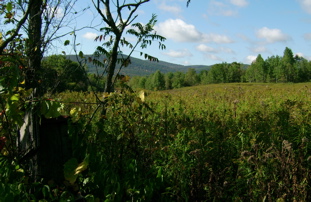 Shortly after that picture I crossed above the Mass Pike, and took pictures of distant mountains in each direction. This is looking East: 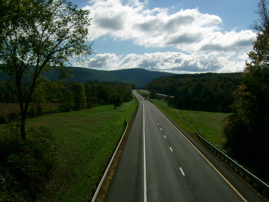 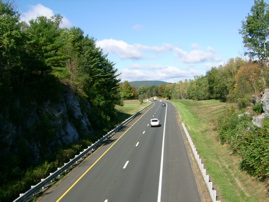 I was in West Stockbridge by this point, and after only a few more minutes’ riding I came to the first rest stop (of 2), almost exactly one third of the way through the ride. I had some food, including a PB&J, and topped off my water supply. I also typed up a blog post, but couldn’t get it to appear right away. I was using a post-by-email method, because typing an e-mail message on my cell phone is a little easier than using the blog interface. However, the blog is supposed to check for e-mail postings if you reload the page, and it wasn’t grabbing the e-mails when I loaded the blog’s front page on the phone (I had e-mailed a post with only a subject line right before the race). It could be that the version of the blog displayed on mobile devices doesn’t contain the code for checking the e-mail account, but the 2 posts did show up later.

I left that rest stop after nearly half an hour (I spent more time typing on the phone keypad than eating), and went through the town center of West Stockbridge. I crossed over what I believe to be the Williams River, which flows right between several buildings. Here’s a view from the little bridge: 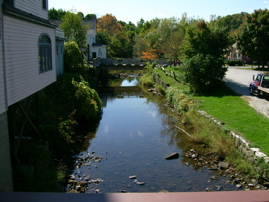 and a picture of flowers in planters on the bridge railing: 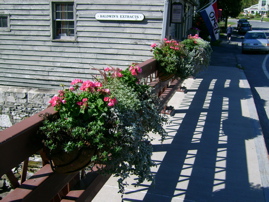 From here the route went South and a bit West, through the town of Alford. After riding a bunch of the way on some wooded roads, and up the longest hill of the day, I came to a nice view of some more mountains: 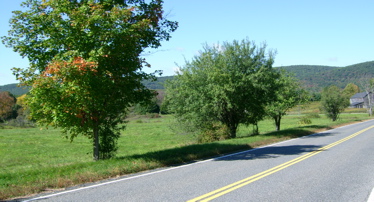 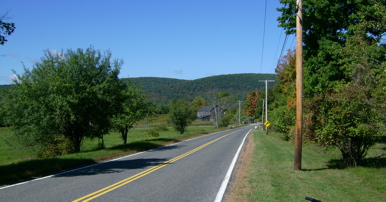 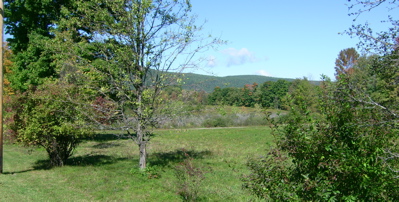 A little while later, back in a tree-lined section of road, I found this individual at the end of someone’s driveway: 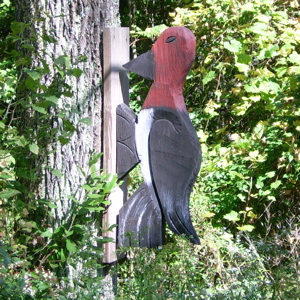 Saw some more mountains off to the side as I headed further South: 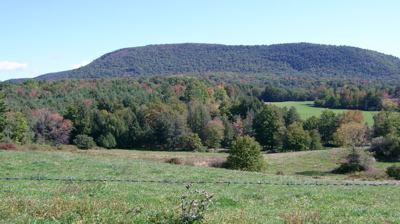 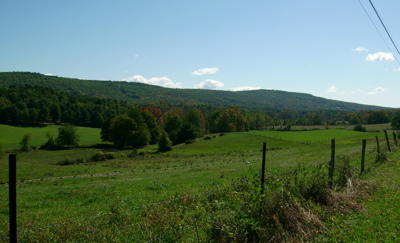 I then passed the approximate halfway point, and headed into Great Barrington, the Southernmost town on the route. After a bit the route headed Eastward for several miles. It was during this Eastward section that I passed, and somehow did not see, the other rest stop. I suppose I was enjoying the ride too much. 🙂

Shortly after I would have passed the rest stop, I crossed a little bridge over the Housatonic River: 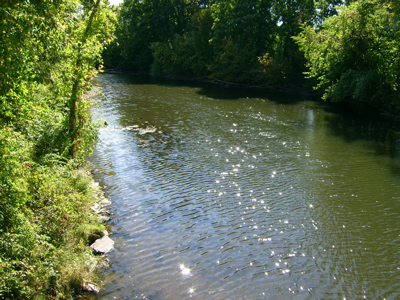 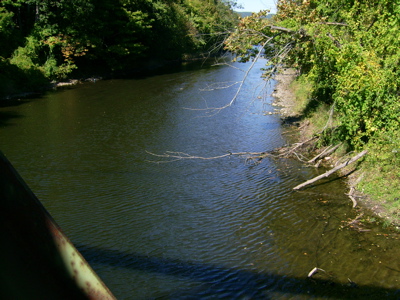 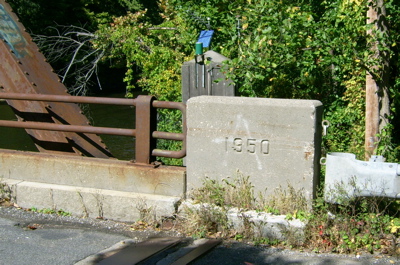 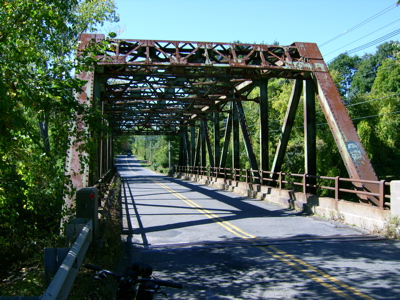 A bit further along, the route headed North again. It came close to this ridge: 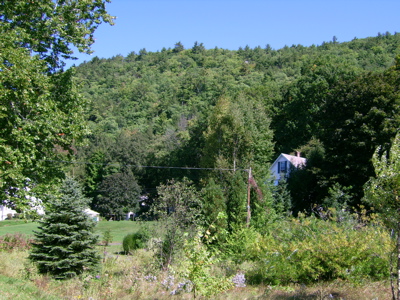 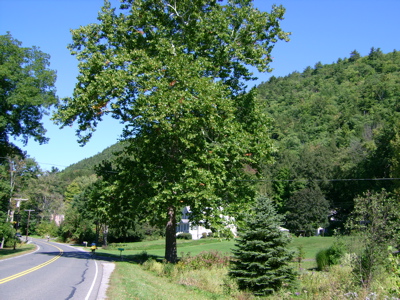 Imagine having that in your backyard!

Soon the road was running alongside the river. I initially thought this river was called the Fox River, because I saw a building labeled “Fox River Paper Co.” However, maps showed me it is the Housatonic. Here are pictures of a wider section of the river next to the road: 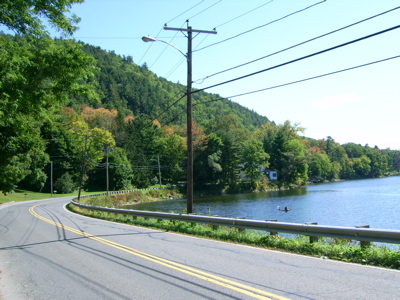 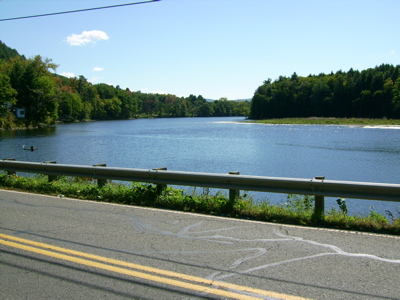 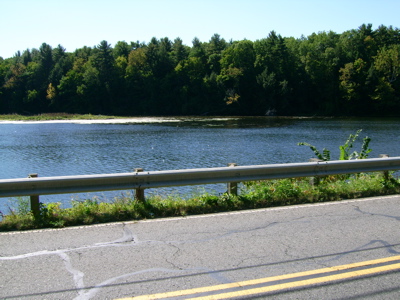 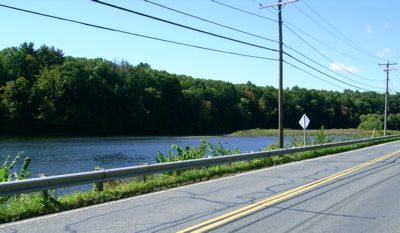 Another mile or so and the road crossed the river, but still was following it, and the river was narrower and had some slight rapids. This was a fishing area, and I saw a few people out there in their waders. I also covered a couple of miles without seeing any route arrows, and began to get worried that I was off the route. I stopped to look at the cue sheet, and it seemed to indicate that I had done all the right things (this was when I realized, though, that I’d missed the rest stop). I also had no cell reception at that moment, so I couldn’t call the organizers to check the route or do another blog post.

I kept going on that road (highway 183), and did eventually see arrow signs. I then passed the Norman Rockwell Museum, but was not interested in visiting. Just a tad after that I got to the next turn in the route, and started heading Northwest on highway 102, back toward West Stockbridge. I was three-fourths of the way along at that point, and this is when I really started feeling fatigued, and the hills started to be a little harder to climb, despite being gradual.

Just before reaching West Stockbridge, I ran out of water. I thought about stopping at a store in town, or going off the route a bit to go back to the first rest stop, but decided against both options. The ride had volunteers driving back and forth in support vehicles, which would pass at pretty regular intervals. Sure enough, I was able to flag down a vehicle shortly after passing the town center, and got a bottle of water from them. That was also when I posted to the blog again, using the regular interface instead of e-mail.

I was certainly slowing down at that point, and even little hills required me to rest, but I was able to push on, and even got another wind (my fifth or sixth wind) with about 5 miles to go). I was concentrating all my effort on keeping going, so I didn’t take any more pictures along the route. With less than 3 miles to go, I was back on a road that I recognized, retracing the beginning of the ride. This encouraged me further, and I had a little more energy to finish. Also helping was when I saw the sign saying “1 mile to go!”

As I rode back into the parking lot at the finish, a group of volunteers stationed there cheered me in, which was nice (I heard them cheering another rider just after I got there). According to the cue sheet, my total ride was almost 51 miles, and I had ridden it in just under 6 hours.

They had a cookout going to feed all the returning riders, so I ate heartily. The location of the start and finish was a ski resort, and the dining area was right by the ski lifts. As I’ve never gone skiing, I hadn’t seen chairlifts up close before, so I took some pix: 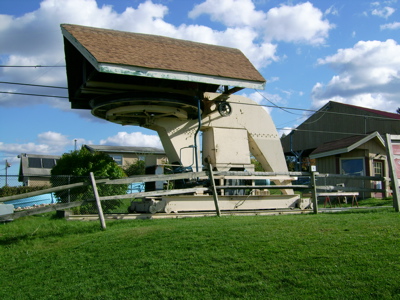 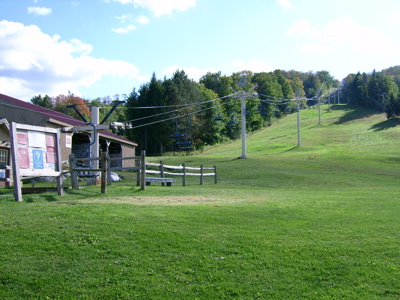 After eating, I packed up the car and made ready to leave. I took a couple of last pictures of myself post-ride, including showing off my number. I leave you with those photos: 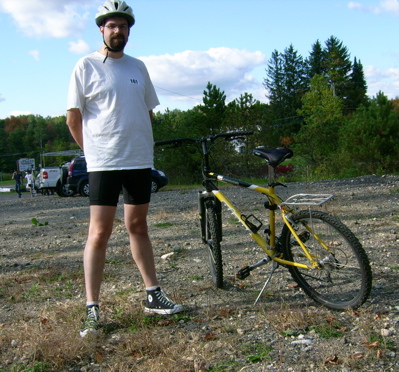 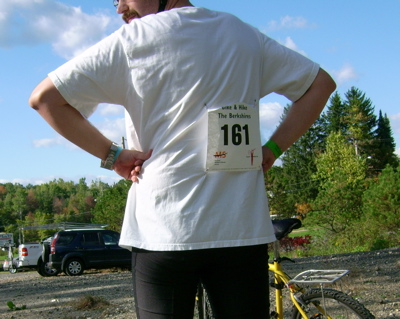