So, in preparation for the Food Bank Ride next weekend, I have gone on a number of training rides over the past couple of months.  Here’s a quick rundown of these rides, with pictures from some of them.  I did not do extensive photo taking, partly because I wanted to keep moving, but also because several of these involved riding in areas I’d photographed before.

July 4 – Huntington and Back:  This was almost totally a route I had followed before, and it was somewhat short.  The total distance I covered was 48 miles, but it was a very hilly 48 miles.  I traveled west out of Holyoke to Southampton, then rode up into Westhampton, and then headed west over a large ridge into Huntington.  I was climbing for almost all of that time.  One interesting highlight of that trip was, as I was resting on the way up the hill between Westhampton and Huntington, a motorcyclist coming the other way and told me about a bear.  At first I thought he was saying that the hill I was about to climb was “a bear”, but as he pulled away, I realized he was warning me that there was a bear by the road.  I was a little nervous about this, so I kept my eyes peeled, but did not see any bear myself.  I made it to Huntington center fine, though found that places I could have eaten lunch were largely closed.  I headed east from there on Route 20 and ended up getting lunch at a liquor store/deli in the town of Russell.  From there, I went on into Westfield, then headed north and east back into Holyoke.

July 17 – Greenfield/Montague loop:  This ride was a total of 75 miles, with some hills, but not a ton.  Pretty much all the hills were in the latter part of the trip.  I rode up to Greenfield from Holyoke on Route 5, which is a relatively flat road, stopping for lunch in Whately at a hot dog stand.  Once I got to Greenfield, I stopped again for house-made sodas at The People’s Pint (because who can resist?).  From there I went through Deerfield to the bike trail that begins there, and headed over to and through Turner’s Falls.  This path is usually good for seeing waterfowl, and in addition to seeing a lot of ducks, I passed a snowy egret in the water. 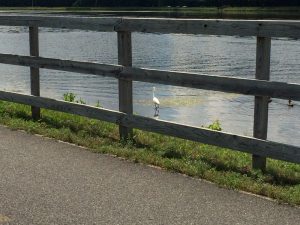 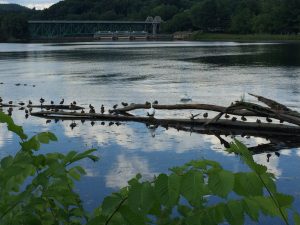 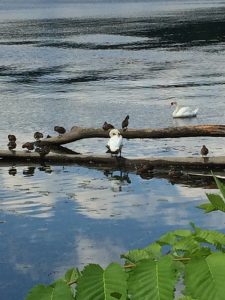 From Turner’s, I rode south through the eastern part of Montague, then through Leverett center, and along the eastern edge of Amherst.  I crossed the Holyoke Range on the not-very-busy Harris Road, and went home through Granby and South Hadley.

July 24 – The Trail to Connecticut:  Once before I had ridden the continuous bike trail from Westfield, MA to Farmington, CT.  In that case, I drove to Westfield with my bike and only rode on the trail.  In this case, I rode down there from home to pick up the trail (which extends further north than it used to).  It’s a fairly easy ride, with very little hill climbing.  But to make up for that, it was long – about 88 miles, which is my longest ride so far this year.  Only a couple of pics, taken from the bridge over which the trail crosses the Farmington River. 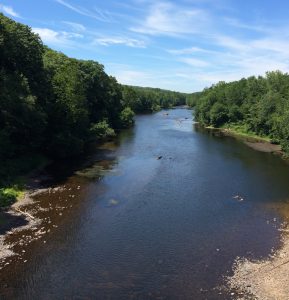 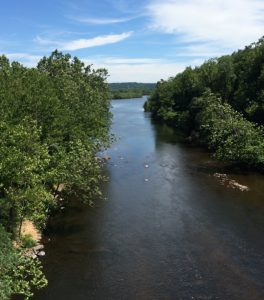 August 27 – Home from the Berkshires:  There were a few weekends when I was traveling, and so could not go for a ride.  Hence the gap between the last date and this one.  On 8/27, we drove out to Pittsfield, MA to see Elizabeth Warren speak.  The event was a bit disappointing, because, even though we had responded to an e-mail to reserve a place, we ended up in an overflow room at the venue, to watch the talk on video.  As the talk was being streamed on the Internet, this was not very different from being at home and watching it, but at least Warren came into the overflow room to greet us before giving the talk.

In any case, I had brought my bike along, and I then rode home from the event.  From there to home was 52 miles, but it was, again, a very hilly ride.  There was an initial climb when I left Pittsfield that was really difficult, as I had to stop and rest 7 times to make it up the long hill.  It was also fairly hot out, and a few times while climbing that hill I felt queasy.  Fortunately it passed quickly each time I rested.  Once I got over that hill I did not encounter any more queasiness.  I rode on some familiar roads on that afternoon, but at least one other unfamiliar road turned out to involve a long, steep climb as well.  It took me more than 6 hours to make it home.

September 4 – Sturbridge:  Looking for a long ride that would cover a lot of unfamiliar territory, I settled on riding east to Sturbridge, in Central Mass.  I first rode down through Chicopee to the south side of the Mass Pike, and then followed Route 20 through the towns of Wilbraham, Monson, Palmer, and Brimfield before getting to Sturbridge.  In Wilbraham, I saw this horse statue, with the springs from an old carriage behind it. 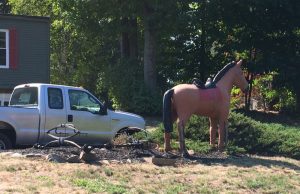 While I did not take pictures in Brimfield, that town apparently plays host to a gigantic antiques market over Labor Day weekend.  There were many white tents set up for vendors on various properties as I rode through town, including some on the lawns in front of houses.

After having lunch in Sturbridge, I rode north and came through some different towns: Warren, Ware, Belchertown.  I had intended to travel through Ware and into Belchertown on a new route for me, but somehow missed my planned turn off and ended up in downtown Ware.  So I just followed Route 9 to Belchertown center, then Route 202 home from there.  Total distance for this ride was 84 miles, and yes, there were hills.

September 11 – Curious Orange:  I’m not saying there’s anything particularly curious about the town of Orange, just that I was curious to ride there, since I hadn’t before.  This was a fairly long ride, and included a number of good-sized hills that I’d ridden before.  I rode up through Amherst and Leverett, then passed through Shutesbury and Wendell.  It had been raining that morning, and I started out just after the rain stopped, so I rode on a lot of wet pavement.  The sun did not come out until I reached Leverett, and I stopped at the Village Co-op there to rest after some hill climbing, as well as to put on sunscreen.  The co-op has a little playground, as well as a small Buddha shrine. 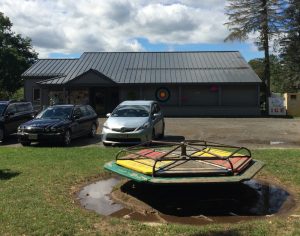 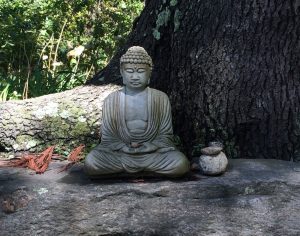 Here are some images taken in Orange.  The first is the town’s public library, the third is a view of the Miller’s River. 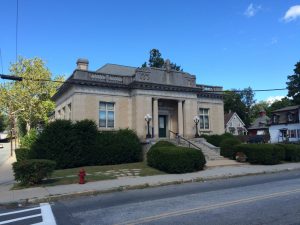 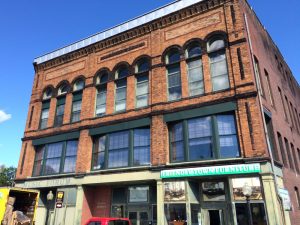 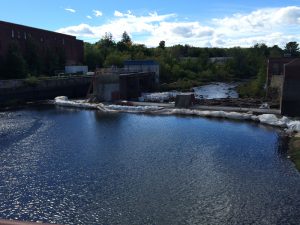 Coming back uphill into Wendell, I stopped to rest by this swamp, though I did not see any particular wildlife there: 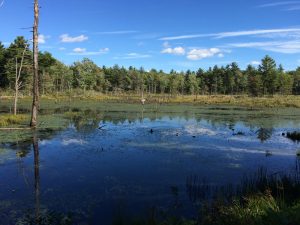 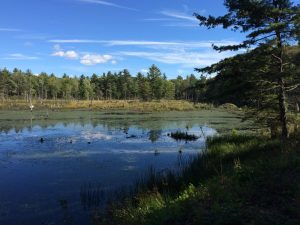 I tried leaving Wendell center through a different route than  I had taken north.  It turned out to be a dirt road, and after a mile or so it abruptly stopped, giving way to a horse trail.  I say that’s the type of trail because 2 people on horseback emerged from it while I was there consulting maps on my phone.  I ended up following a side dirt road back to the road I’d taken north.  I did then head to Shutesbury center, which is another long climb, but then I got to ride a long downhill run almost all the way to North Amherst.  From there, my route home was the same as in the morning.