Well, as you know if you were reading my last few posts, I had a fun and successful ride in the Berkshires yesterday.Â  It was pointed out to me that my live posts from the ride seemed to have the wrong times on them.Â  Sure enough, I checked the time zone setting on my blog last night and found it was set to UTC -5 (i.e. Central Time), so the posts appeared to have been created an hour earlier than they actually had.Â  I’ve corrected that setting now, and changed the 5 posts from yesterday so their times are correct.

The drive out there was uneventful, and there were no problems with my bike on the back of the car.Â  This is the ski lodge where the event is based: 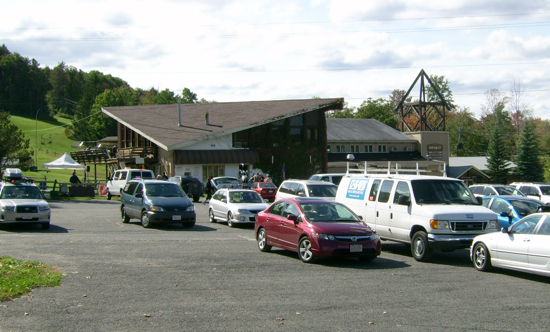 I arrived, got checked in, put on my number, etc.Â  This is my number attached to the back of my shirt:

I got that shirt from this event 2 years ago.

Here I am near the starting line as we were just about to line up for the 50-mile ride: 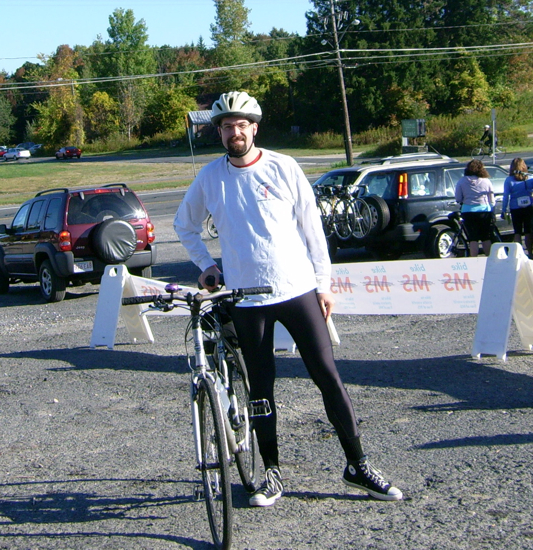 I started out in long sleeves and pants, as it was chilly, but I had other layers underneath for when it warmed up.

I could tell I was speedier and more endurant than the previous time, as I kept fairly close with people at the front of the pack for a while.Â  2 years ago, the whole pack left me behind within a few miles of the start.Â  I was able to go quite a ways without resting, and in fact, I stopped the first time mainly just to take come pictures.Â  This is one of them: 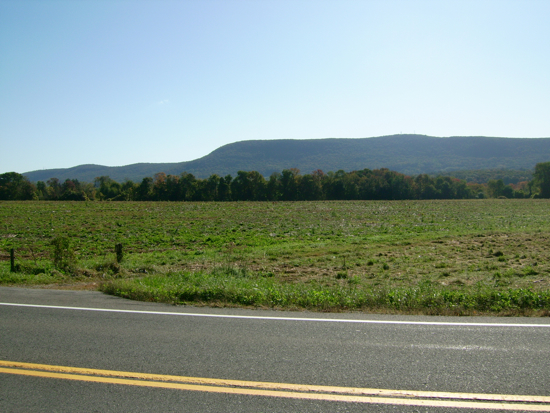 That’s off of route 42 in or near the town of Richmond (I included an iPhone pic of the same view in a live post).Â  I generally tried to take pictures of things that I didn’t photograph 2 years ago, as I didn’t think I needed to duplicate the old stuff.Â  Plus, that allowed me to stop less.

I got to the first official rest area in relatively quick time, and then spent half an hour there between using the bathroom, having a granola bar, and blogging (note to self: posting 6 pictures from my iPhone with only a 2-bar cell connection takes a while).Â  I was feeling pretty warm at that stop, so I stripped down to my short-sleeve jersey and shorts, and put on sunscreen.Â  This seemed like a good move until I got going again, when I got cold riding in the wind.Â  Within an hour, though, the temp got warm enough that I stopped being cold.

I had something happen during this second leg of the ride that I hadn’t experienced before: a falling leaf hit me in the face and pasted itself onto my sunglasses.Â  The wind just held it there.Â  I had to reach up and pull it off, otherwise it probably would have stayed there until I slowed sufficiently for it to fall off.

Partway through this second leg, I took a couple pics of a pond: 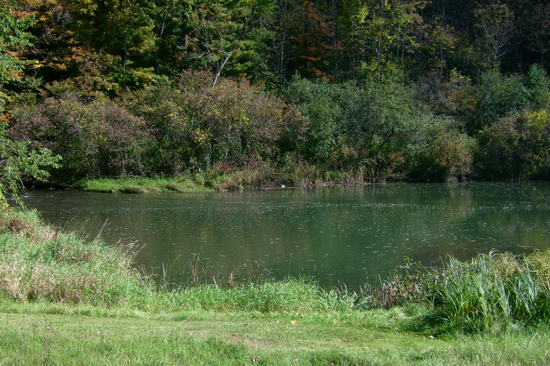 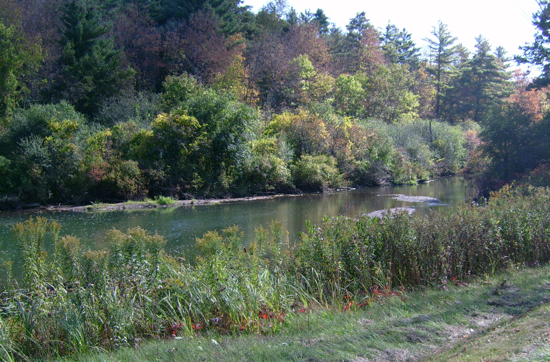 And after a couple more miles, some mountain shots: 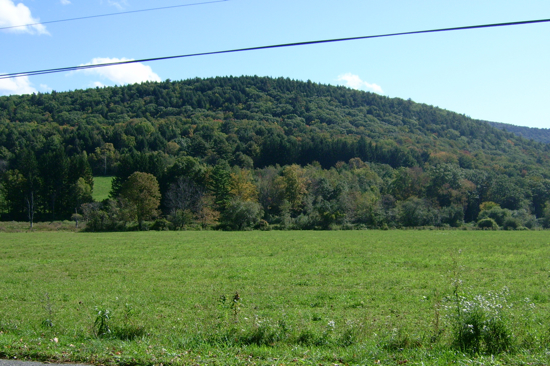 Even with 2 photo stops, I still made as good time to the second rest area as I had to the first.Â  Here’s where they setup the second stop, located in Great Barrington: 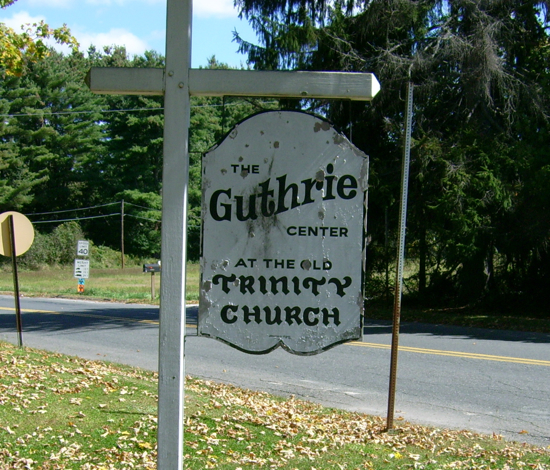 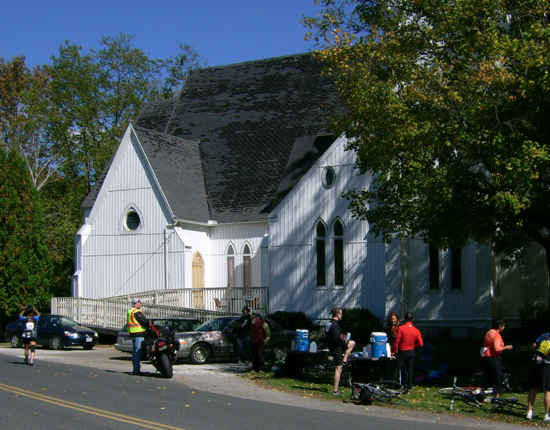 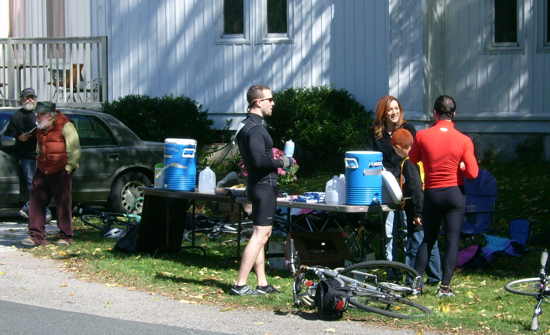 Soon after that, I came to this paper mill, which I had seen last time but not photographed.Â  I think it’s a pretty neat building: 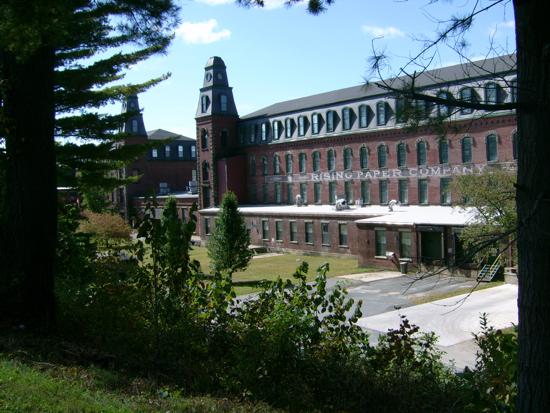 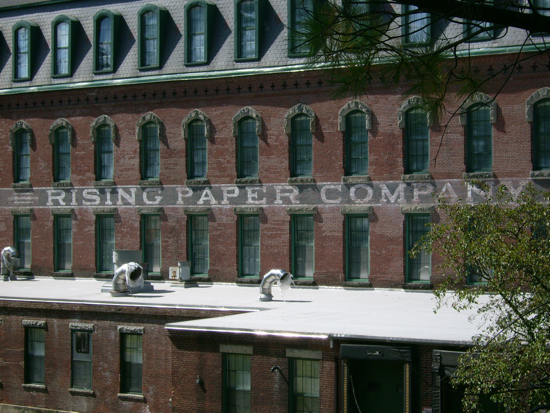 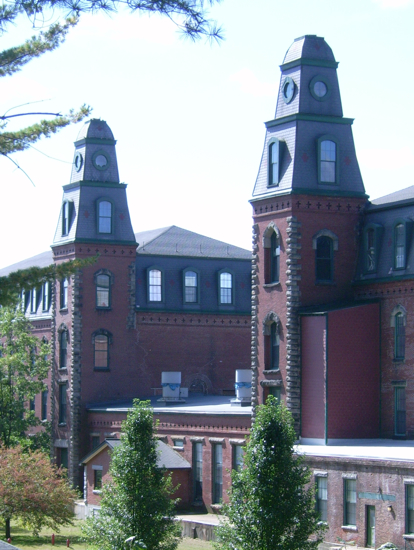 And just a couple miles from that was what looked like a village center, which from Google maps looks like might be called Housatonic.Â  It’s definitely part of the town of Great Barrington: 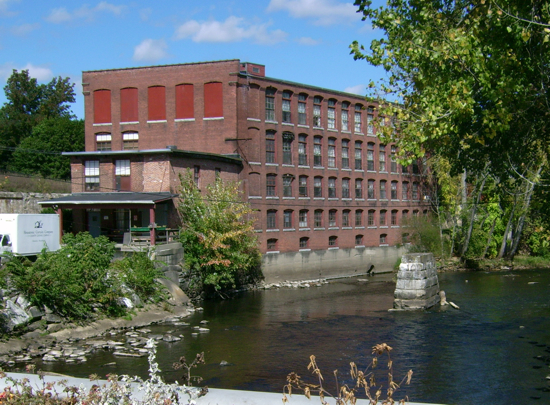 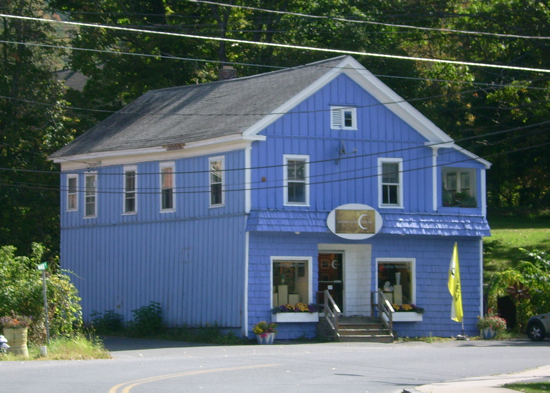 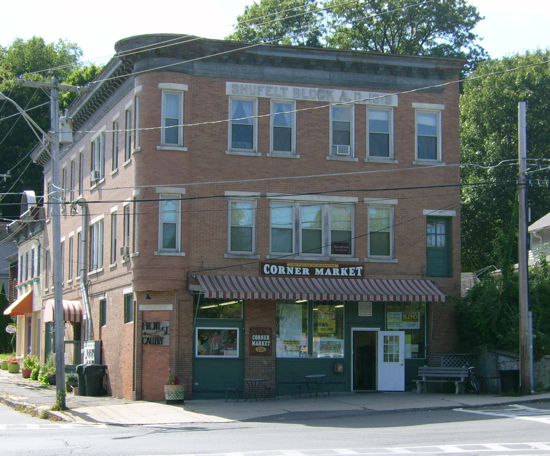 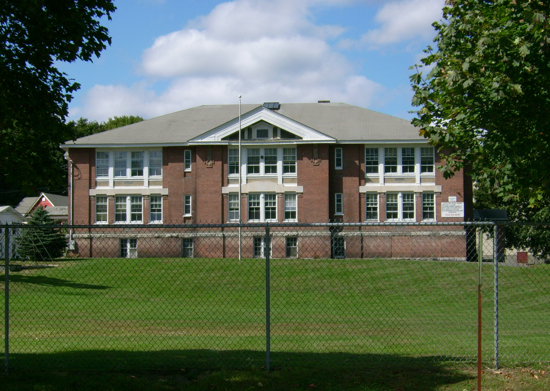 The route then headed North into Stockbridge, following the Housatonic River, and heading slowly uphill over a couple of miles.Â  Eventually, I passed the Norman Rockwell Museum: 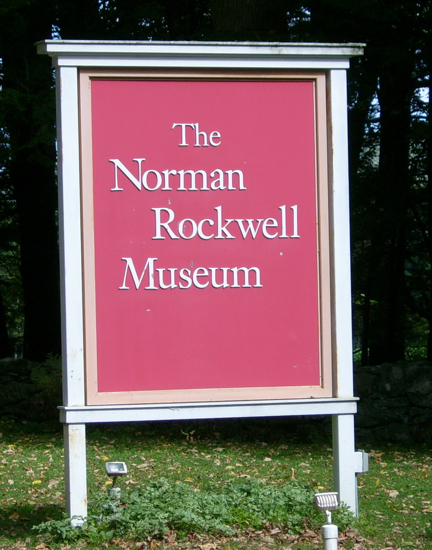 The road levels off for a bit after that, but then one turns West onto Route 102, and the road ascends again.Â  It’s a gradual hill, but it’s long, and by this point my legs were getting a little tired.Â  That climb ends soon after 102 crosses the Mass Pike, and then there’s a nice long downhill ride back into West Stockbridge.Â  In that town’s center, I stopped again (and blogged), and then started the last 10-mile stretch.Â  Mild hills felt like a lot of work at this point, given my muscular tiredness, and I had to downshift much more often (and into lower gears) than I had to earlier in the ride.

I did make it back to the ski area before 2:00, though, cutting off an hour from my time 2 years ago.Â  Here’s a picture of me at the end (after I’d eaten and stuff): 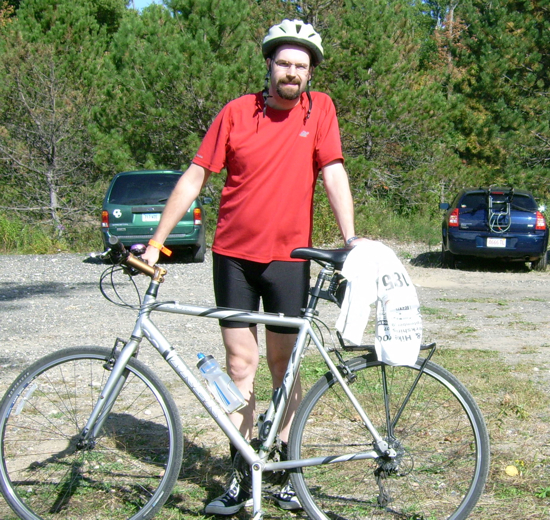 Thanks very much to everyone who supported me with donations.Â  The total amount I raised was $715, about equaling the donations I got last time (and this time the economy is worse, so I really appreciate people’s willingness to give).

In the future, whether I do more charity rides or just riding for fun, I can certainly challenge myself to ride a distance like this in even shorter time, but I feel like I’m ready to attempt greater distances.Â  50 miles has, in a sense, become “no big deal” for me.Â  Stay tuned to this site for further developments!