Blog : Cutting at Both Ends

Cutting at Both Ends

On October 4, a couple of ribbon-cutting events were held (along with some other festivities) to mark the completion of new sections of bike trail in Northampton.Â  I was there, and my report follows.

The first ceremony was held at the bike bridge over Main St. downtown.Â  It drew a pretty good-sized crowd: 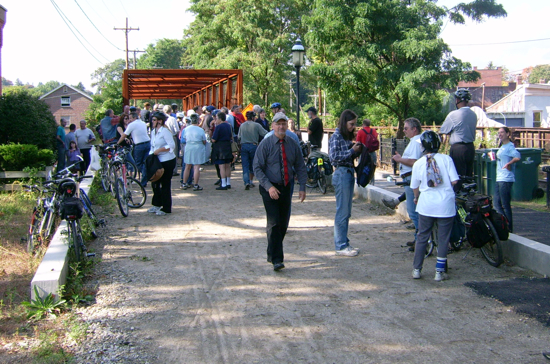 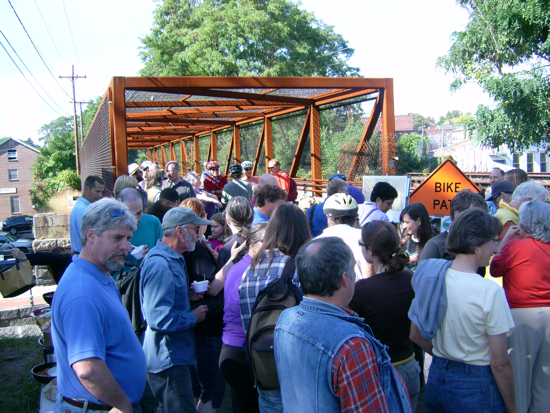 It was originally thought that this section of trail, which parallels the train tracks through town, would be completely done by the date of the ceremony, but as you can see in the top picture, there is still a bit of paving to be done.Â  It should be finished by sometime in November.

As people were milling about, waiting for the event to start, I spotted local radio and stage celebrity Kelsey Flynn: 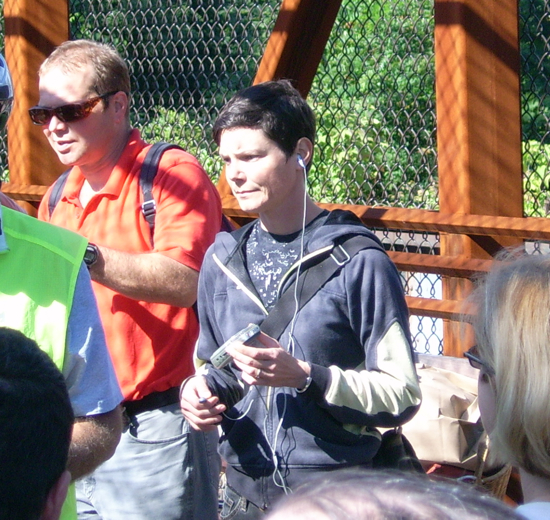 She was there putting together a radio story, which can be listened to here.Â  Here she is recording while people spoke: 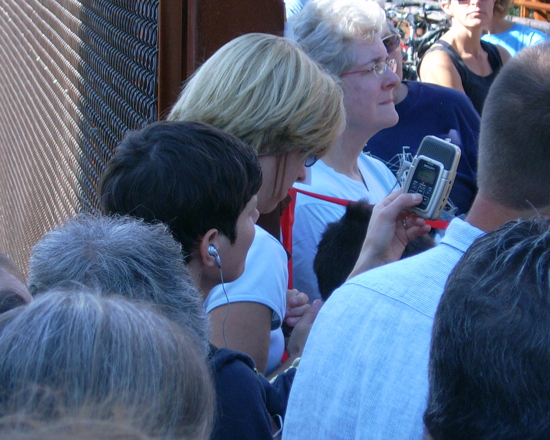 Four people spoke on the trail system, the new bridges (over Main and North Streets), and what it took to get to this point.Â  They also mentioned upcoming projects, such as a trail connecting the Northampton trails to the Manhan trail in Easthampton.Â  The first to speak was Mayor Clare Higgins: 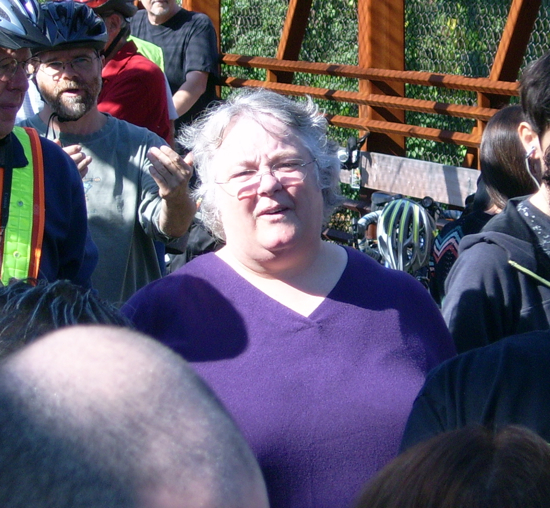 She was followed by Ward 3 City Councilor Bob Reckman (whose ward we were standing in): 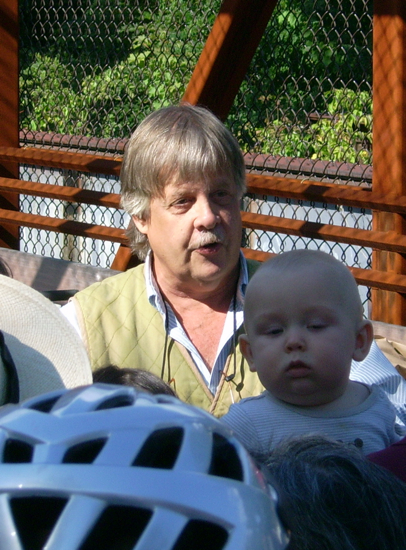 (Reckman is the one with the moustache, not the baby) 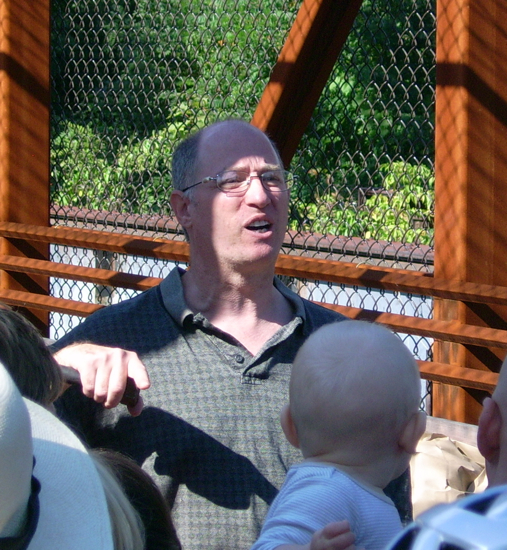 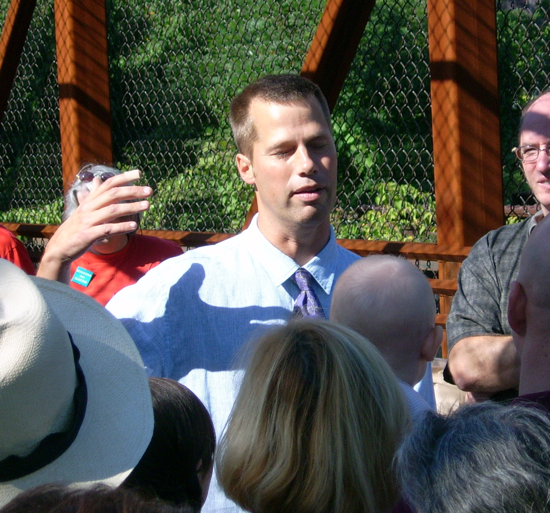 Wayne Feiden thanked various groups who were involved in helping realize the new trails, including Friends of Northampton Trails and Greenways, of which I’m a member.Â  Also present were some people from the Friends of the Manhan Rail Trail.Â  They said that the sinkhole in that trail was in the process of being filled in, and was more than half done.Â  I heard this past week that the work has been completed, and pictures can be seen at this site.

Once the crowd broke up there, I went a on a little tour of the Northampton trail with its new sections, led by Craig Della Penna, a local realtor and trail advocate.Â  He talked about the history of the older trail, and of the railways that used to run along the beds the trails use now.

The old Northampton Bike Path goes through the village of Florence, and there is a new section of trail heading through part of Leeds (both Leeds and Florence are sections of the City of Northampton).Â  At the end of the new Leeds trail, the Leeds Civic Association was hosting the second ribbon cutting, as well as other activities. Here’s the scene at that end: 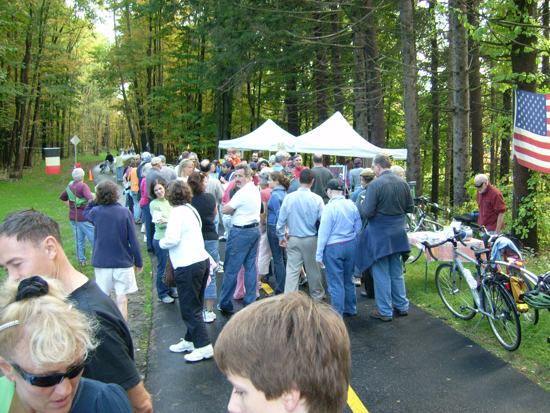 Most speeches were given by the same cast of characters as earlier (Higgins, Feiden, Narkewicz): 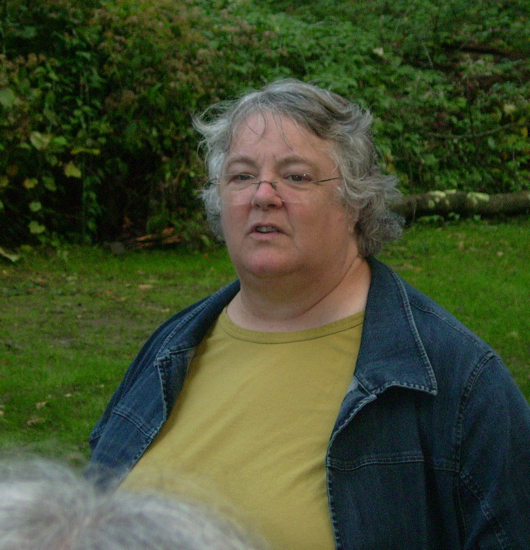 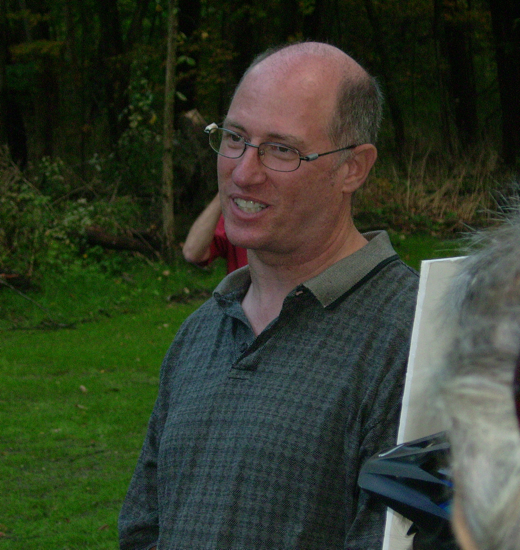 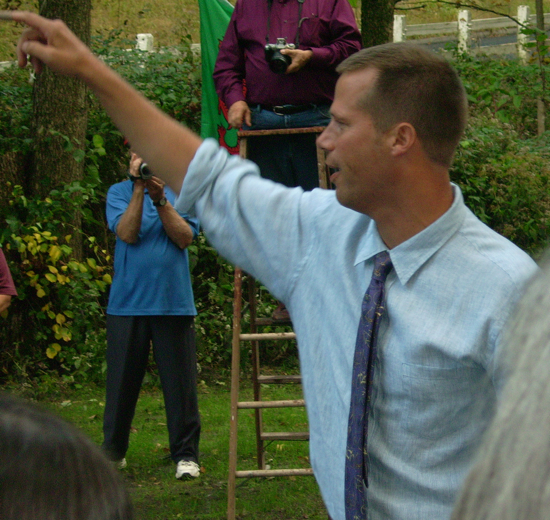 I actually got a halfway decent shot of the moment the ribbon was cut this time: 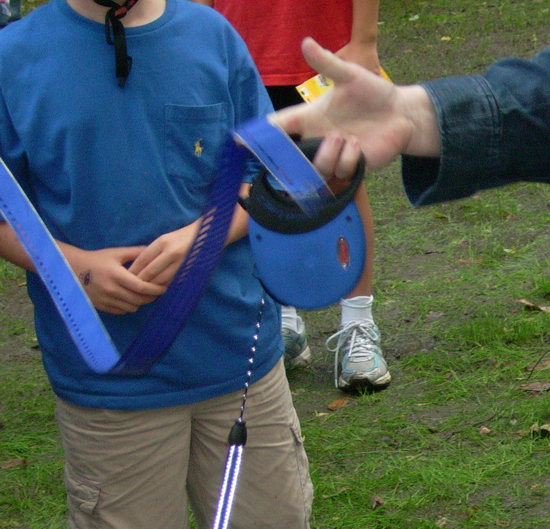 The mayor had a local kid assisting her for the cutting.

Once that was over I had to head home to make dinner.Â  It was nice to have almost uninterrupted trail to take me all the way back to the center of Hadley from Leeds.Â  I got home in just under an hour.Â  I didn’t have much time to take pictures of the trails themselves, but hopefully I can do so on a future excursion.Â  Meanwhile, construction is starting soon on the trail down to Easthampton – can’t wait until they finish that!