I went for a ride on Labor Day, and my main destination was a place that’s not very well-known around here, and even less visited.Â  But I’ll get to that in a bit.Â  First, I headed over to Northampton and checked out the new bike trail that runs North-South along the train tracks: 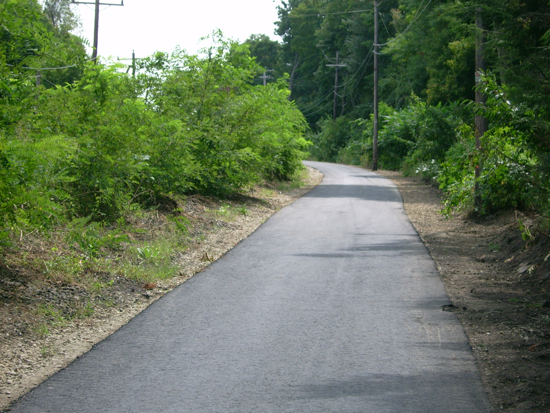 It seems that it’s not quite finished, as you can tell when you get to a bridge that another layer of pavement is needed for things to line up.Â  There are 2 bridges on this section of trail – one over North St.: 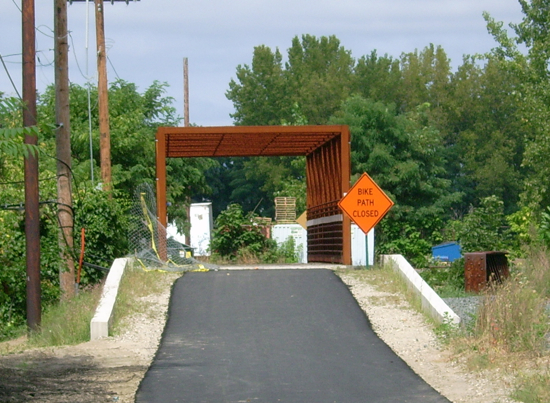 and one over Main St.: 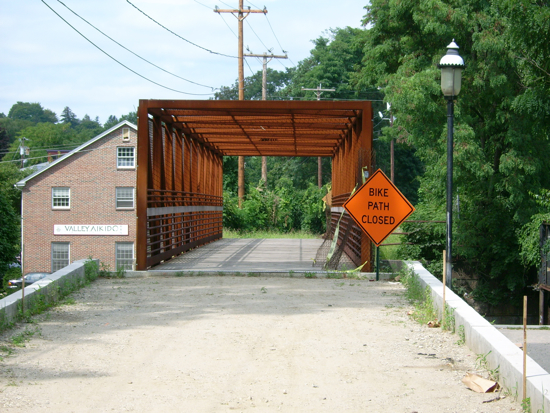 Though both of them say the path is closed, neither has any barriers, so I rode across them both (and I wasn’t the only one).Â  After crossing Main Street, the trail passes along the “back” side of downtown Noho, mainly passing a couple of parking lots.Â  It then heads West, passing a corner of the Smith College campus and crossing the Mill River on another new bridge: 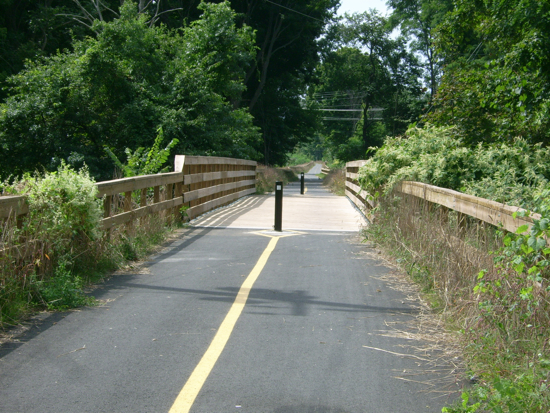 That bridge replaced an old railroad trestle.Â  Looking down, you can see that it uses the same supports as the train bridge did: 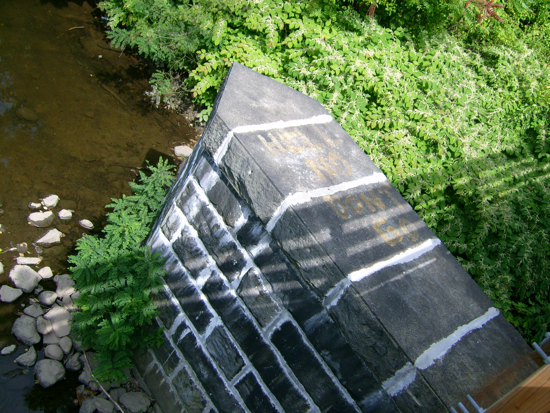 Here is the river flowing South from under the bridge: 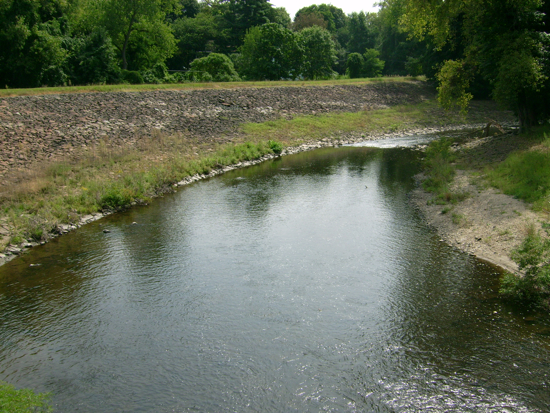 Soon after that, the path comes to an end (until they do more construction), and dumps one on Earl St.Â  a short block from there put me on Route 10, which I followed Southwest to the town of Easthampton.Â  In Easthampton center, there’s a nice pond that’s fed by (or feeds into) the Manhan River.Â  I sat on a bench by the pond to have lunch.Â  This was my view: 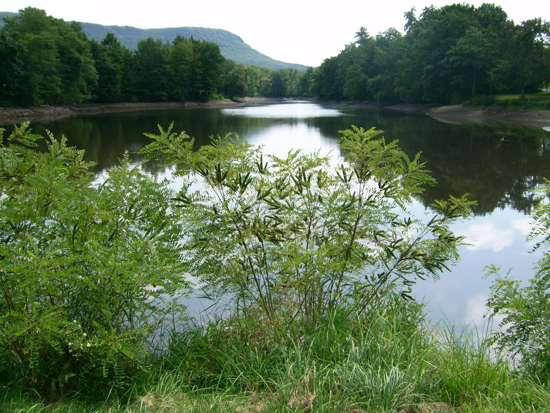 Just behind where I was sitting was a bear statue: 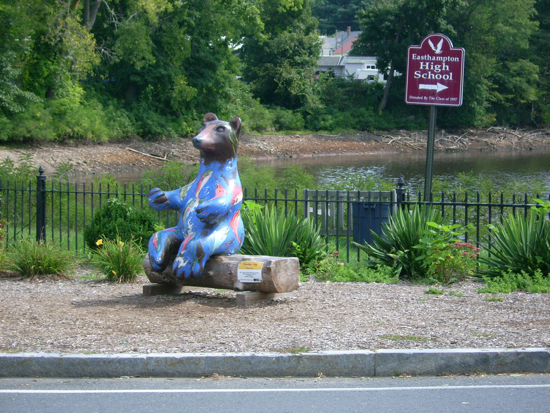 It’s part of this art project the town is doing this year.

After eating, I headed South on Route 141 into Holyoke.Â  This includes climbing a considerable hill just before getting to the Holyoke line.Â  I rode up that hill last year on the way to hike Mt. Tom, and at that time I had to rest 4 times to get up the hill.Â  I must be in better shape right now, because I only had to stop and rest twice on this occasion.

My main goal was to head to Scott Tower in Holyoke’s Anniversary Hill Park.Â  I found out about it last Fall from an article in the Valley Advocate (our local free weekly paper).Â  One first goes to Community Field, which is a little playground/park that is easy to find.Â  From there, there’s a little road that passes under the freeway: 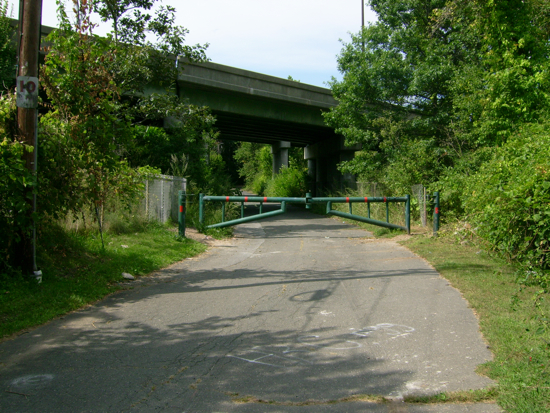 The other side of the overpass is, I believe, where Anniversary Hill Park officially begins, and the road gets a bit narrower as it heads into the woods.Â  The road heads uphill, and eventually reaches a cell tower.Â  From there, there are narrower (but still paved) paths that lead up to the top of the hill and the observation tower.

Here is Scott Tower itself when I emerged into its clearing: 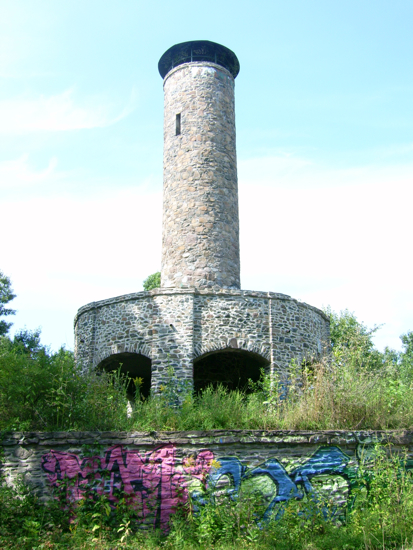 The area around the base is quite overgrown: 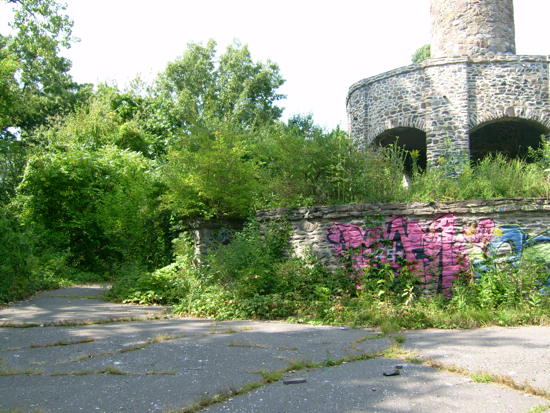 Clearly people do come up here regularly, but it is not a place used highly by the general public, or maintained much by the city, as evidenced by the large amounts of graffiti, litter, and broken glass (do not go there in bare feet or even sandals).

The base of the tower: 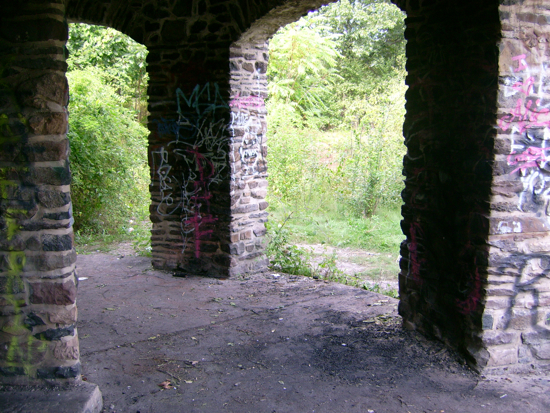 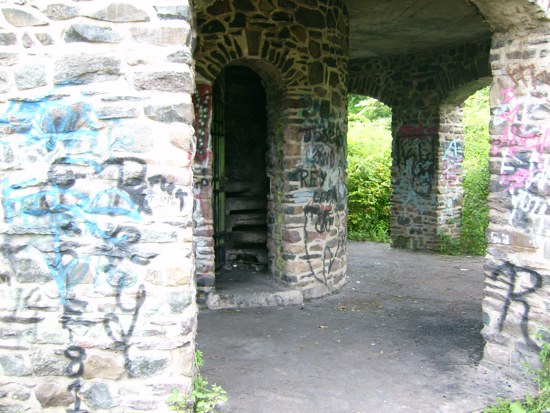 More evidence of low maintenance is this sign, which clearly used to include the words “Enter”, “at”, and “risk”: 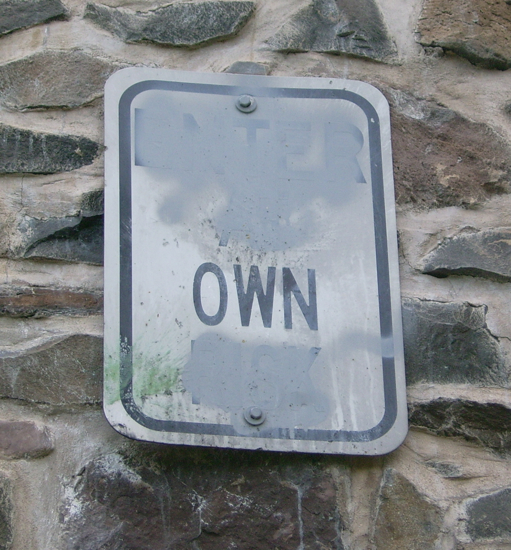 Here is the entrance to the spiral concrete staircase: 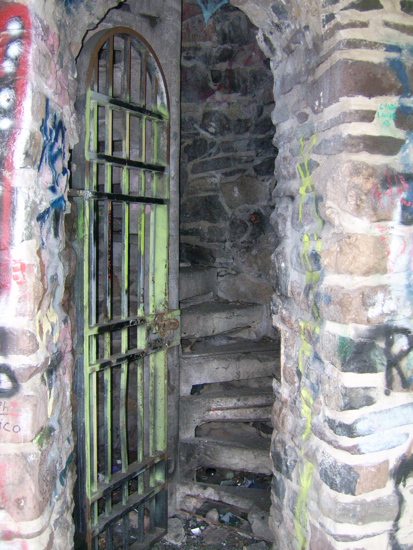 The steps go up one story to an observation deck around the tower: 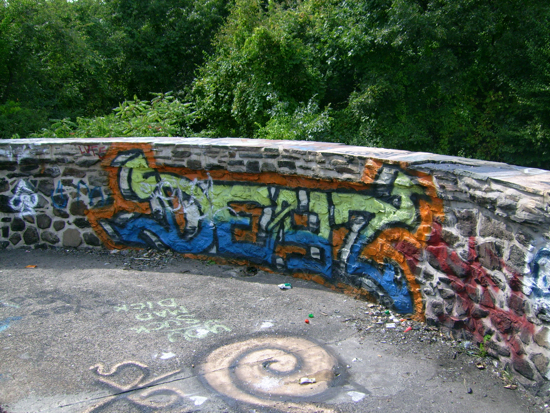 On that deck is this interesting graffito: 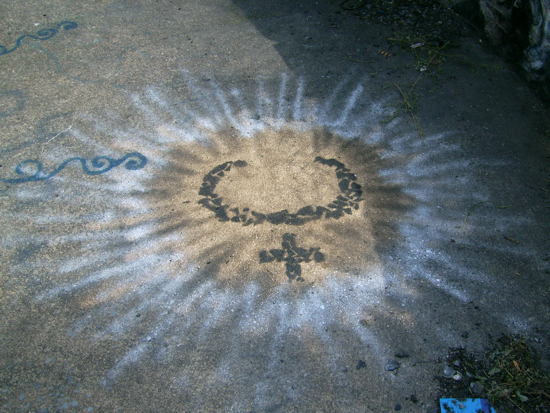 This deck occurs about one quarter of the way up – there’s still a bunch more to climb: 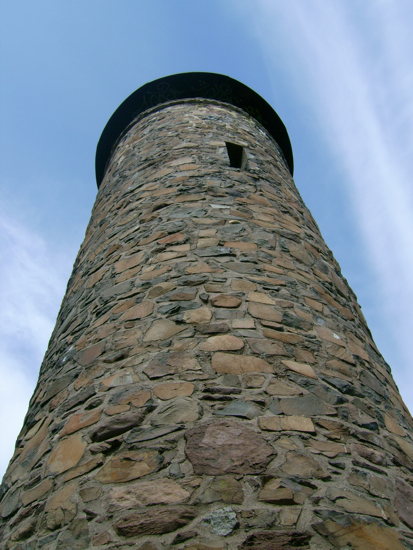 I continued up the steps, which were mostly in good condition, though I found one that was mostly missing (I stepped over that one).Â  Nearing the top, there’s this narrow window:

At the top, there’s a metal roof overhead, with some bars holding it up: 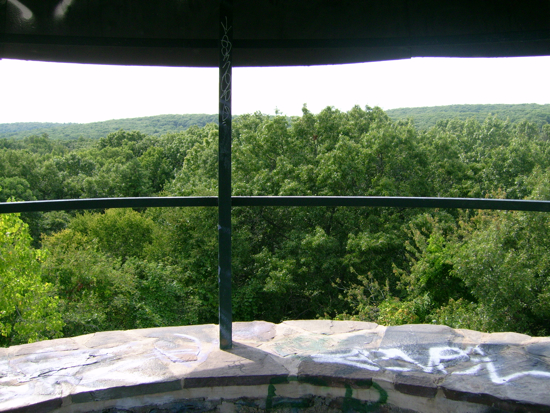 Here’s a view of Mt. Tom to the North: 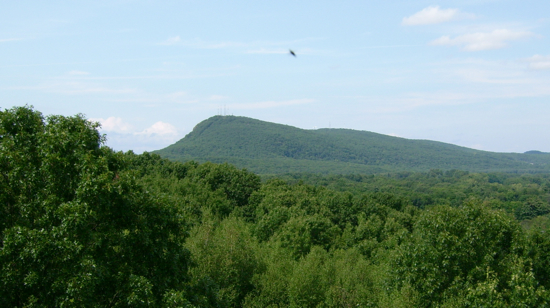 Downtown Holyoke to the East: 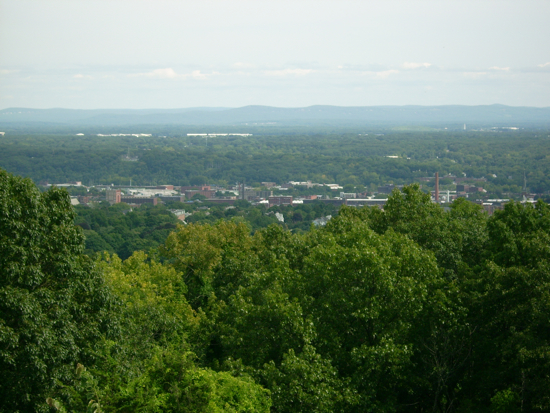 The ground below, where I emerged from the woods: 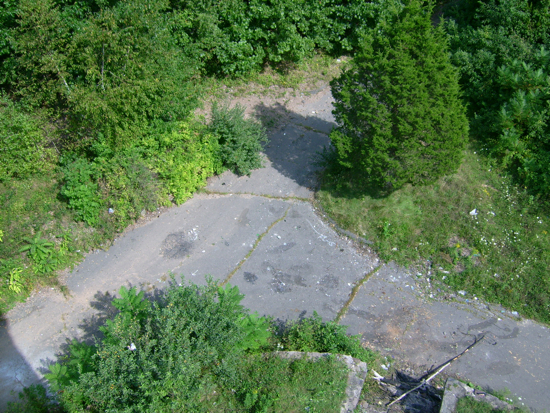 and looking South, the Holyoke Soldiers’ Home (with a bit of I-91 visible to the left): 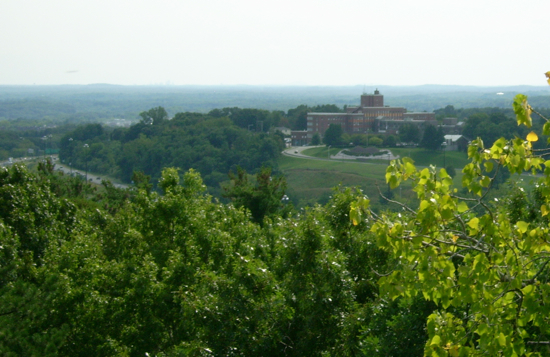 After taking a good look around, it was time to head back down the steps: 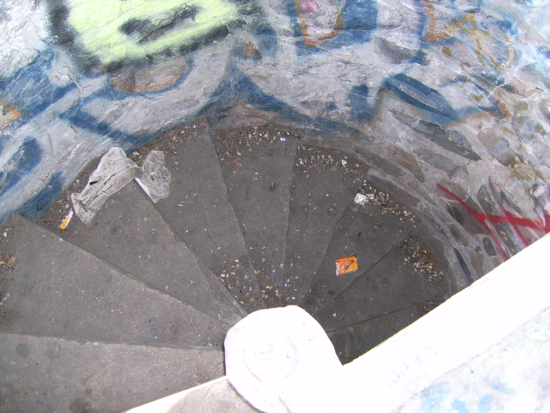 They seemed steeper heading down.Â  I had no trouble doing so, though I had to be slow skipping the missing step.Â  I rode back down the hill, and encountered a few people coming into the park just as I was about to cross back under the freeway.Â  Other than them, I hadn’t seen a soul while exploring.

I headed out of Holyoke into South Hadley, crossing the Connecticut River on US Route 202.Â  Here’s the view downriver from that bridge, looking toward the Holyoke dam (which you can’t really see, but it’s where the water drops off): 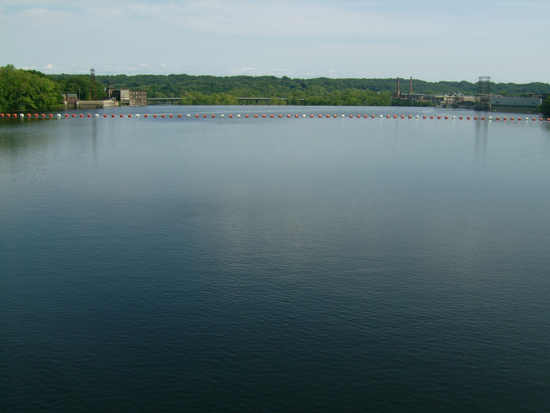 Off to the right side is where some of the water is diverted into Holyoke’s system of canals: 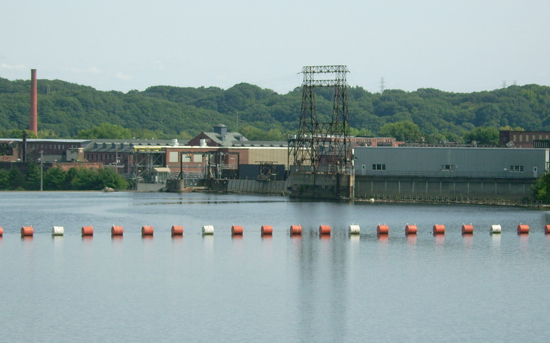 From there, I headed North through S. Hadley back to the town of Hadley and home.Â  Total distance: 34 miles.

Next: A Town that Isn’t