I arrived in London by train from Didcot in the early evening of September 8, disembarking at Paddington Station.  I was feeling hungry, but wanted to get my luggage to the place I’d be staying before seeking food.

It took a little bit of time to find the correct bus stop, but I did manage to fit myself and my 3 bags onto a bus, rode it a ways south and east, and transferred to another bus to go a bit further.  I had booked a room in an apartment for 5 nights, again through airbnb, and I got there a bit after 8:00.  The couple who lived there were very nice, offering me some leftover stir-fry that they had made for dinner, so I had no need to go out for a late meal.

The next morning, I took a bus north up to King’s Cross Station, and then walked southwest toward some museums I planned to visit.  The bus system in London seems to run pretty well, as there are frequent buses, and most of them are double-decker, so there’s often plenty of capacity.

I had been told I should try a full English breakfast, so I stopped in at at a pub, but it turned out to be an Irish pub.  I got their “Irish Breakfast,” which involved most of the same foods.  It contained:

I had not even heard of white pudding before, but it and the black pudding were not bad.  The other items were pretty good.

From there I headed through the Bloomsbury neighborhood of the city, where I happened upon a little park called Tavistock Square.  The place seemed somewhat dedicated to peace, as at the center of the park there is a statue of Ghandi: 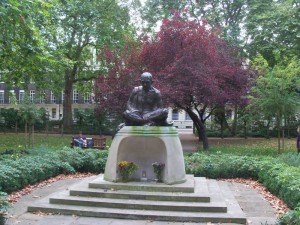 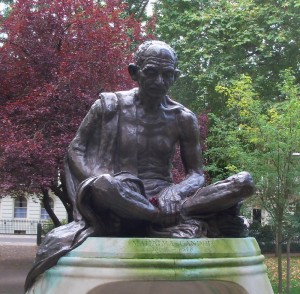 and in the north end of the park was a monument to conscientious objectors (click on any image to see it bigger): 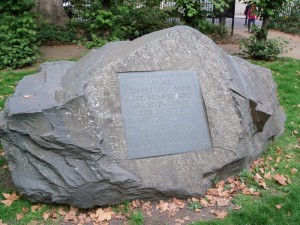 The park also had a monument to a famous literary figure of Bloomsbury’s past: 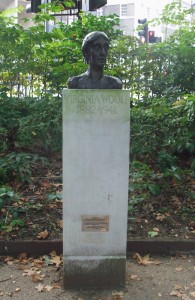 From there I headed to the Cartoon Museum.  It’s a small place, so I expected to spend only an hour or so – maybe 2 hours there.  I ended up being there for about 3.5 hours, as I wanted to read most of the cartoons and comic pages that were on exhibit.  This being 2014, the museum had a large exhibit of World War I art, which was very absorbing.

Once I was finished at the Cartoon Museum, I walked a couple of blocks north to the British Museum.  At this point I only had a bit over 2 hours to spend there, and it’s a big place, but it’s free admission, and I could always come back later in the week to see more.

Here is the front of the place: 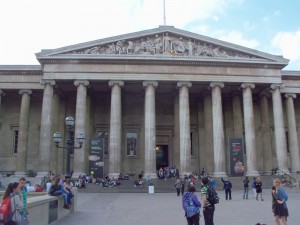 Which is bordered by this ornate fence: 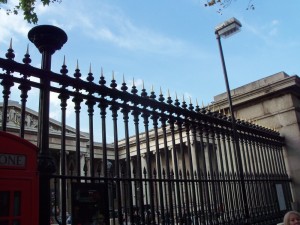 And then the interior courtyard, looking back toward the entrance hall: 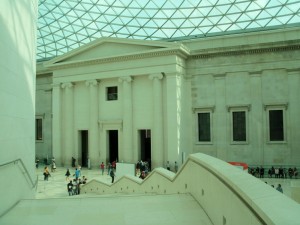 This area was in the past open to the air, but now has this interesting roof:

This is the center section of the courtyard, with stairways going upward around both sides of it: 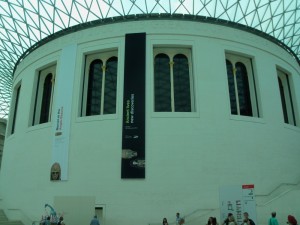 I managed to see a number of Mesopotamian, Greek, and Roman artifacts, as well as an exhibit of clocks and watches, and early Anglo-Saxon items.

Upon leaving there, I took the Underground for the first time, heading out to Hammersmith.  There I got a quick dinner at a falafel place (and cheap for London – a sandwich and drink were only £4 total), and then went to the Apollo theater for the Kate Bush concert (the motivation for this whole trip).

The place was quite crowded, but that’s not surprising for a sold out concert.  I visited one of the merchandise booths to get a couple of things, and then made my way to my seat, way up in the balcony.  Photography was strongly discouraged, as this was supposed to be treated more like a theatrical show than a rock concert.  I did take a picture of the venue before the show started, though: 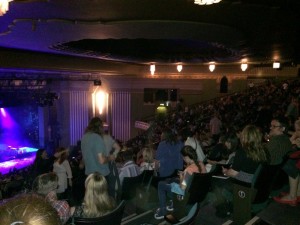 And here’s one at intermission (the feather on the curtain was related to the second act content): 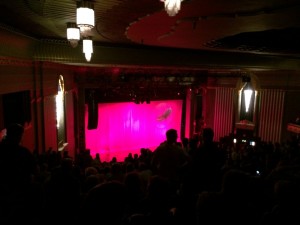 After that performance, I saw an announcement that some of the nights would be recorded for a DVD release, so I don’t want to say too much about the content of the show, as some folks reading this might watch the video of it at some point.  The show was mostly made up of 2 themed song sets from her albums (one of these sets in each half of the concert), and those involved dramatic content, neat costuming, and even special effects.  But there were several songs performed in a more straightforward manner, as well.  I had a great time, and still find it a bit hard to believe that I actually got to see her perform live after all these years.

Leaving the venue at the end, I noticed it was lit with color-changing lights: 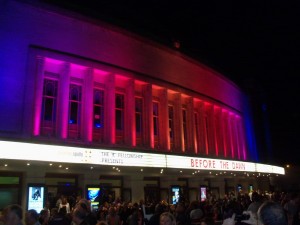 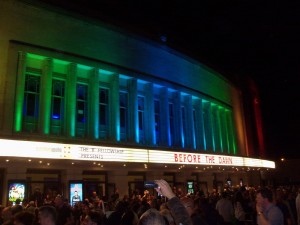 It had still been light out when I went in, 4 hours or so earlier (the show itself was about 3 hours long).

A combination of subway and bus got me back to my lodging, and I headed to bed soon after.

Next: government, science, and more waterfowl.